Affirmations: Do They Work For Anxiety and Low Self-Esteem?

I've been skeptical about helpful quotes and positive affirmations for a long time. To me, they smack of the denial present in some forms of positive thinking: keep up a cheerful facade, and everything will be fine.

I'm not down with this type of philosophy. Anxious people with low self-esteem also need the freedom to acknowledge their struggles in a safe environment, free from judgmental stigma and the oppression of relentless optimism. Sometimes, we need to talk about how not fine everything is.

However, some people swear by the power of positive affirmations. An enormous self-help movement, from Louise Hay to Tony Robbins, has been built on the premise that positive statements about ourselves not only make us feel better, they can heal our lives/minds/bodies/souls/children/parents/goldfish. Oh, and our dogs, too.

So, do positive affirmations really help repair our sense of self-worth? Well, it depends. 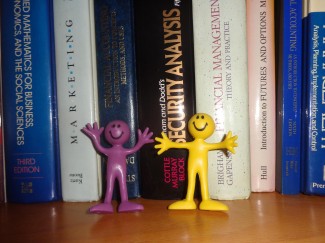 Positive affirmations are meant to counter negative self-talk, the horrible things we say to ourselves, like, "I'm ugly," "I'm stupid," or even, "I'm unlovable." More garden-variety examples might be, "I'm not smart enough to pass this exam," "My boss hates me, and I'm going to get fired," or, "I'm bad at public speaking."

While there's absolutely nothing wrong with countering negative statements about ourselves, psychological studies suggest that many people may be going about it the wrong way.

Negative self-talk is mostly subconscious, right below the level of our awareness. It often reflects our deepest, core beliefs about ourselves, and is a baseline sort of "internal truth." This doesn't mean it's actually true, but it's what we believe about ourselves on a deep level.

When we impose a positive affirmation (which comes entirely from our conscious mind) onto a deep-seated, unconscious belief, we are, in effect, lying to ourselves. We don't actually believe the positive statement. We're engaging in a kind warfare between the conscious and subconscious.

The only problem with going to war with yourself is, you always lose.

A 2012 study by Dr. Joanne Wood at the University of Waterloo concluded that,

. . . repeating positive self-statements may benefit certain people, such as individuals with high self-esteem, but backfire for the very people who need them the most.

Wood and her colleagues found that the study participants with low self-esteem felt worse after repeating the statement "I am a lovable person." Those with high self-esteem did feel better after repeating the phrase, but only slightly. Wood also found evidence that suggests countering deeply held negative beliefs with "untrue" positive statements may paradoxically reinforce the very beliefs one is trying to get rid of.

So if positive affirmations don't really work for anxious people with low self-esteem, what does? The answer may be interrogative versus declarative self-talk.

Positive Questions Instead of Positive Affirmations

A study by Senay, Albarracín, and Noguchi in 2010 had four groups of participants solve a series of anagrams. Each group was asked beforehand to write either "I will" or "Will I" 20 times on a sheet of paper. Those who wrote "Will I" solved twice as many anagrams as those that wrote "I will."

For example, "I'm no good at public speaking," and "I will give a perfect presentation at work today" are both absolute, declarative self-statements. But, "Will I give a good presentation at work today?" opens up lots of possibilities for middle ground rather than absolute extremes. Possible answers could include things like, "I get really nervous in front of people, but my last presentation went well overall," or, "I don't like it, but once I get going, my fear of public speaking does go way down."

Positive affirmations can set up a tug of war between the conscious and subconscious mind that may do more harm than good. But interrogative questions about the self allows for more leeway in our self-interpretation.

If I've learned anything, it's that building a healthy sense of self-esteem occurs within the multiple shades of grey between black and white thinking. Asking rather than telling ourselves allows a more realistic blend of the positive and negative aspects of our human reality.

And that I am down with.

APA Reference
Weber, G. (2014, September 5). Affirmations: Do They Work For Anxiety and Low Self-Esteem?, HealthyPlace. Retrieved on 2022, June 25 from https://www.healthyplace.com/blogs/treatinganxiety/2014/09/positive-affirmations-do-they-really-work-for-anxious-people-with-low-self-esteem

With all respect, i don’t think anyone is denying their current situation by reciting positive affirmations. If anything you’re accepting that you have negative thought patterns, that you obviously don’t want to have or else why would one even look into this subject into the first place.

I found that affirmations are working for me. What are negative beliefs? Repetitive internal comments that have become the software of our subconscious over time. I found that yes at first positive statements contradicting negative beliefs at first will arouse a very stubborn defensive subconscious. The mind is incredible, it fears change and at first the subconscious will fight back. I understood that all the junk in my mind was a byproduct of repetition, like when you learn the multiplication table. At first, you really need to think hard and once you master it becomes second nature embedded in the subconscious. The same with affirmations, the key is repetition and not once or twice a week but every single day. I use my walk to work (1+ hr) to affirm myself that a) I am so confident b) I am so smart c) Good things are happening to me and so forth. I am to repeat them 5 minutes each and you know what after 2 moths I feel different, better and yes smarter, more confident and positive. The key here is stubborn disciplined consistency. This is your life, try repetitive affirmations for 2 months and see how suddenly the world looks.

This post is disturbingly similar to one by Sophie Henshaw posted in March of 2014 on psych central. I like how it's been elaborated upon here, but maybe you could include a citation?

Hi Sally,
I'm not aware of the post you referred to. Want to share the link?
Thanks,
Greg

I have used positive affirmations regularly and they really helped me, but like anything you have to work really hard at it which I can't do when depressed.
Louise Hay is a guru of self love and I think her stuff is actually quite deep beware of anything superficial .
My fave rite affirmation is "Even though I have (this issue), Or even though I am experiencing (this problem) I love and accept myself exactly as I am" I repeat this statement at least 100 times per day. I also write it down.
I also work myself up the emotional scale anger feels a lot better then depression as long as you don't stay there long, being overwhelmed feels heaps better then anger etc...
Different things work for different people and I am of the philosophy that we use whatever works for us if we survive today we can thrive tomorrow. An example is some people swear by cognitive behaviour therapy and that doesn't work for me.
On the surface my self esteem appears very high but when you look a little deeper it's shaky at best.
I love recovery ortrientated approach which says I will live the best life possible for me with without symptoms of my illness.

I've found that positive affirmations work if you start small and build up. It is very, very difficult to look at yourself in the mirror and say something positive. It's easier to be critical.
What worked for me was not to focus so much on affirmations, but rather name things I'm grateful for, write down two emotions I'm feeling, and/or write down a couple things about that day that are good. (I had to do this in an outpatient program, so I couldn't get away with not doing it.). The one about what's good about the day did not have to be grandiose. It could be something as small as "I only hit the snooze button once this morning." or "I didn't burn the toast." Some days, there aren't a lot of good things, but this makes you have to think and look for the good in things.
The point is to retrain yourself to think positively and if you keep at this, you do start thinking differently. For me, that's made all the difference and helped immensely with my anxiety.