Suicide and Mental Health: They're Cooking the Books

...and it costs lives

I just read an article in the Sydney Morning Herald which says that,

"THE loss of life deemed attributable to depression has been cut by half in new government statistics after a change to the counting method which a leading expert says forms part of a systematic effort to downplay the mental illness toll." (bold added)

Nice that they can just magically make unpleasant facts go away like that, isn't it? If only the realities of mental health were that simple.

If only fiddling with a few statistics here and there actually changed the fact that mental illness plays an indirect, often hidden, role in a lot more deaths than any of us would like to imagine.

This one hit home because I have a family member who will die of a chronic illness, but primarily due to depression. Because she's tired of fighting, wasn't given the help she needed years ago. Just like all too many people. 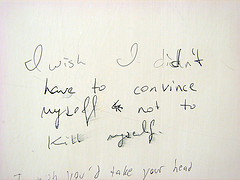 In 2006, it was okay to recognize depression as a serious factor in a host of chronic diseases, on the basis that suicide is linked to depression. In 2007, it's not.

The 'others', the deaths that get pushed down the list - so that suicide is no longer ranked second only to heart disease in the number of potential years of life lost to a range of chronic diseases - "were the result of different illnesses or episodes of despair unrelated to depression."

"Episodes of despair unrelated to depression." Seriously? You have to be kidding me. Wake up, people. Wake up!

Seriously enough to consider its role in our lives, and our deaths. It's time to take the lives of those in pain, and suffering because of mental illness, seriously.

And it's a chance to save lives

Suicide is preventable, if mental illness is recognized early enough.

Treating anxiety, depression and other mental health issues should, and must, be a priority. Because in 2006, suicide was second only to heart disease as the reason people lost years of their lives.

Because we could all have better lives, lives that include less difficulty, despair and grief, if mental health was acknowledged as the big player in our overall health that it actually is.

If we address it early, we can help prevent suicide

My first shrink said I was lucky - they'd caught the depression early. I was 14 when I took my first dose of Prozac. If they hadn't caught it, I wouldn't be here.

I wouldn't be able to tell you that cooking the books like they have, whilst it may paint a prettier picture, avoids one very simple truth: Mental illness kills.

It kills when it doesn't have to, and it takes a toll even when we do our best not to notice.

The sooner the world wakes up and realizes that, the better off we'll all be. Most suicides are preventable. If more people were given help with mental health conditions earlier, they'd live longer (not to mention happier) lives.

But for any of that to happen we have to recognize mental health. It would help if our governments did first.

Mental Health: It's Kind of Like Gravity...
Top 10 Reasons Mental Health Suffers at Christmas
alchemynow
December, 28 2010 at 9:48 am

I very much appreciated your post and comments here, and have included a link to this in my post today
+HONEST THINKING ABOUT DISSOCIATION AND DEATH at
http://stopthestorm.wordpress.com/2010/12/28/honest-thinking-about-dissociation-and-death/
I believe there is a strong and clear link not ONLY between 'depression' and suicide but ALSO a very strong one between 'dissociation' and suicide. There are people, especially survivors of early and severe infant-child abuse and trauma who have nervous system-brain-body patterns built into them that make 'a happier life' nearly impossible to achieve. Those people suffer throughout most of their lives from the body-built changes that happened to their physiological development. There are times when ENOUGH finally feels like TOO MUCH -- and a longer life of continued suffering does not seem an attractive alternative.
Understanding how intergenerational trauma changes the development of infant-child abuse suffers is much of what my blog is about. Perhaps there is something there that might be useful to some of your readers.
Thanks!

Suicide as a result of deliberate life really is a big disaster, like the suicidal person as well as for relatives and whole society. In the first place is the age in which people carry out this suicide act and destructive behavior. Unequivocally this kills of the most productive community members. When it is known that most of those who died as a result of suicidal act are depressed, which can be treated, then the spiritual pain become more terrible. With that depressive disorder is often a disguise disease, it is advisable that as soon as any psychic problem to recognize and then treated in a psychiatric service.

(Angela of "Life with Bob" here. Would have left my URL, but I can't remember it off the top of my head and I'm in a hurry.) :)
Perhaps you've seen the story on the news about the guy in Florida who went into a school board meeting and shot the place up before shooting himself. Turns out he was "upset" because his wife, a former school district employee, had been recently fired. It also turns out he was bipolar and hadn't been taking his medications lately. Why not? Because he COULDN'T AFFORD THEM. Hmmm...wonder if his wife carried their insurance? Wonder if she worked not because she was bored, but to supplement the family income because those damn pills are plenty expensive, and without her income, he couldn't afford to fill the scripts?
Makes you wonder, doesn't it?

Kate, that quote which opened your piece ... WTF does it mean?? (It's a sincere question...) All I can think of -- who knows how -- is the term "collateral damage." Is this an intuitive leap or a brain fart?
I'm also reminded -- by all those huge numbers -- of a marvelous and eerie book that I think was intended as "juvenile literature" but is speculative fiction of the highest order. It's called *Momo*, and it's by Michael Ende. I first read it in 1983 and it still blows my mind. There are characters in this story who intend to take over the world by convincing everyone to "save time." How these "men in grey" (They wear identical business suits, overcoats, and bowlers -- creepy!) go about their takeover is weirdly similar to what's happening in our world now (to relate it to the book's plot): Everything and everyone is being "converted" into numbers, currency, statistics, objects of monetary / economic value ... and being thought of as such ... . It's one of the under-the-radar tragedies of human habit ...
You know, I rail and rail about the term 'mental illness' (as in, I'd like to obliterate the term from use). You, in this post, make me see how we collectively must give a basic, respectful recognition to illness and injury that is expressed in large part through the functions of what we call the mind, as contrasted with the structures and systems of the brain. I'm astonished that we (in the West, anyway) *still* insist on not only separating, but *divorcing* mind from brain from body ... Truly integrative medicine has a long way to go, but once we realize the actual wholism of a human being, there's no going back to being defined (or self-defining) by "micro-specialized" labels -- So many of the labels and their implicit assumptions reveal nothing about a person's lived experience, about the *story* of an illness / injury ...
Sometimes I think that the most horrific 'mental illness' we humans can suffer is our fear of one another ... thus our constant conflicts in relation and all the ruin that we can inflict on our own kind.
I once sat in on an Abnormal Psych class at my local uni -- the prof had a reputation as a mesmerizing lecturer. He delivered a monologue that blew everyone's mind -- He hefted the course text (damn thing must have weighed 30 lb -- and that was back in 1986!), rifled through the pages, and started rhyming off diagnoses. "Bipolar disorder! ... Schizophrenia! ... Obsessive-Compulsive disorder! ... Major Depression! ... Psychosis!" Then he quietly clapped the book shut, laid it down, and walked around a bit, smiling, hands behind his back. "We're all in there," he said. "Every single one of us, at some time in our life. Somewhere in this book [again, hefting the text], you'll find yourself one day." ~ Hoo boy, you could have heard a pin drop ...
I'm blathering ... must go ... but unless we humans as a whole make *relation* our first priority in how we conduct ourselves, I don't see much hope of recognition. So many people are running in circles already, not even recognizing themselves, so at speed all the time that there's almost no time for relation. Now *that* is insane ...
Yes -- read that book *Momo* --> "There's no time for relation" sums up what the archetypal bad guys believe and enforce. One little girl, and her small tribe of friends, set out to save the world ...
:-)