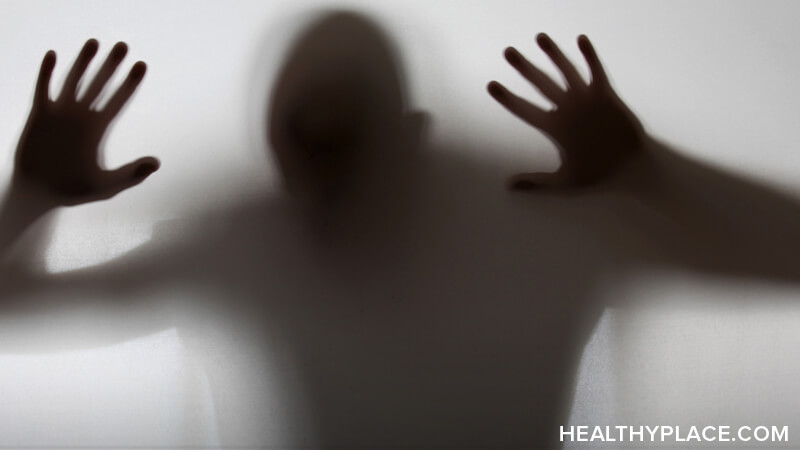 What Happens with PTSD and Psychosis?

Psychosis, in its most basic definition, means a lack of connection to reality. Symptoms are the kinds of psychotic reactions we often see in the media. These include hearing voices other people don't hear, hallucinating people or sensations that are not there, believing one has grandiose or magical abilities or speaking in a rapid and agitated manner about events or theories that don't make sense to other people. These are just a few examples of ways psychosis can manifest outwardly.

Some Symptoms of PTSD Are Not Psychosis But Are Very Similar

In order to be diagnosed with PTSD, a person must meet specific criteria from different symptomatic clusters. Some of these share characteristics with psychosis, but are not true psychosis. For example, when a person has a flashback, he will suddenly lose his sense of place and see and feel the traumatic experience again. Likewise, a veteran with PTSD may develop an irrational fear of garbage trucks because the loud, frequent clanging sounds they make remind him of combat.

Unlike true psychosis, however, these symptoms do not persist beyond reason. A flashback, for example, can sometimes end on its own--even fairly quickly in some cases. It is also directly related to a specific moment of trauma that has become trapped in a person's mind and body. Hyper-sensitivity to loud sounds may look odd to other people, but does not necessarily represent a persistent disconnection from reality. Under scrutiny, this type of fear may actually demonstrate a hyper-acute awareness of reality.

Bessel van der Kolk, a renowned PTSD doctor, teacher, and author of the book The Body Keeps The Score, has discovered that PTSD occurs when trauma becomes trapped in the body (Relieve Symptoms of PTSD: Allow Your Body to Shake). Typical PTSD symptoms are physical responses--like intense fear--that are useful during a traumatic event. That intense fear once helped to signal something was dangerously wrong, but because the trauma survivor was unable to turn that fear into action (like running away), it becomes trapped and turns into PTSD. Developing symptoms like social isolation, anxiety, fear, dissociation, intrusive memories, depersonalization, etc. after an experience like that does not mean a person is disconnected from reality. Rather, it means he continues to be connected to a time in reality that has already passed.1

Why Do Some People with PTSD Develop Psychosis?

Many disorders besides schizophrenia can include psychotic features. Posttraumatic stress disorder is one of them. One study of combat veterans with PTSD found that 30 to 40 percent of participants experienced actual audial or visual hallucinations--not just the relatively hallucinatory experience of a flashback.2

It is unclear why some trauma survivors develop psychosis and others do not. Some may have another disorder, like schizophrenia or severe depression. Others could have their psychoses triggered by drug use. In the case of someone I know who experienced psychosis with PTSD, an acquaintance bullied him by spreading a rumor that he had committed an atrocious abuse similar to that which caused his PTSD. He became convinced that people wanted to kill him. To me, it seemed he had turned his anger toward his own abuser inward once he had been triggered by the false accusation.

How Can You Help Someone with Posttraumatic Stress Disorder in Psychosis?

A person in psychosis may need long-term medical and psychological attention. It can be difficult to convince someone undergoing psychosis to seek help because he believes what he is experiencing is real. That is one of the reasons why involuntary hospitalization exists. I am not a huge proponent of involuntary hospitalization, especially for PTSD as many psychiatric wards are not trauma-informed and can lead to re-traumatization. When someone is psychotic, however, there may not be any other choice.

Involuntary hospitalization laws vary by location but usually center around the idea that the person is either an imminent threat to herself (like being suicidal), someone else (like attacking someone), or so incapacitated he cannot take basic care of himself (like not eating, sleeping, or bathing). If you cannot convince your loved one to go to a hospital or clinic for an evaluation, you may have to call emergency services to take him in against his will. This is a difficult decision, but without care, psychosis will often get much, much worse.

If you are dealing directly with someone who is in psychosis, do not agree with his delusional beliefs or pretend to see or hear something that is not there. Surprisingly, it's also not helpful to directly tell him that he is psychotic as that idea can feel stigmatizing or lead your loved one to distrust you. This can actually cause him to rescind farther into his own world, which bears an internal logic that supports his psychosis.

Instead, try asking gentle questions that help him stay focused. In milder situations, this may help him understand it's not real. For example, when I experienced a drug-induced psychosis, I began to understand I was paranoid when the person I was with gently asked why I felt I was notable enough to be followed by the FBI. In severe cases, however, encouraging professional care while assuring her that you're there to help is the best thing you can do.3

This may not always work. When I tried asking these types of questions to my friend in psychosis, he simply said "stop, I can't," and became increasingly non-responsive and eventually catatonic. This is purely my own theory as a writer and PTSD patient--I am not a mental health professional--but I think that because PTSD is already treatment resistant in some cases, PTSD-associated psychosis may also be treatment resistant. That does not, however, make it incurable. It simply means that someone with PTSD-related psychosis will very likely require long-term medication and specialized treatment as recommended by his medical team.

Interestingly enough, I am experiencing the opposite. I suffered from acute psychotic disorder that, upon the psychosis breaking, I am dealing with PTSD. I am having to relearn life in reality.
I started a blog in treatment to deal with the aftermath of living for so long in a psychotic state. The comments and encouragement from my readers, along with regular sessions with my therapist, have helped in my recovery.
You can read some of my stories at breathingwithanoose.com

Great read, thank you as well