Can Crime Shows Play a Part in Self-Harm?

Criminal Minds, Law and Order, NCIS -- crime shows have become a staple on television for over a decade. These kinds of shows mesh mystery and violence with suspense and romance and when all of those factors collide, of course it’s going to make for an impressive hour of television. Another piece that fits in with the crime show puzzle is violence, blood and mental illness. Unfortunately, many negative characters in these kinds of shows end up with mental illness, which stigmatizes mental illness and those truly struggling with it. You also see a lot of self-harm.

I will be the first to admit that I have been a huge fan of Criminal Minds and Law and Order: SVU for years (even though, at 26, I still don’t like watching episodes alone). I like the suspense and intensity and guessing who-did-what along the way. However, there are moments when I stop and really see how difficult some of the topics and scenes could be for the audience – especially for those dealing with mental illness and the addiction to self-harm.

Recently I was watching a crime show with my sister and began to feel a little uncomfortable when I noticed someone on the show burning her skin. Even though I’ve watched lots of shows that present the audience with violent, frightening scenes, something about these specific scenes made me uneasy. 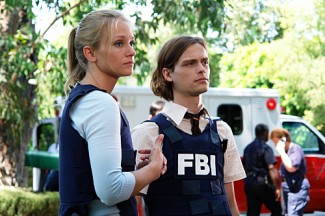 After finishing the episode, I realized there had been many times throughout the hour where characters would use different ways to self-harm: burning, punching walls, pressing in bruises, purposely freezing their skin. From the eyes of a former self-harmer, these kinds of actions hit home.

Even though my past choice of self-harm had primarily been cutting, there were moments when I was in such a depressive state where I would punch walls and angrily push in healing marks. Even though now I cannot imagine going back to those negative coping skills, I still can feel the tension that watching those scenes bring forward and I imagine many other individuals may feel the same.

If you are someone who self-harms and feels unsafe urges when watching shows or movies with excess violence and gore, be the strong person you know you can be and walk away from the screen. Sometimes it can be tough to get your mind in a safe place and redirect when in the middle of watching a beloved show.

You must always focus on your emotional and physical well-being first and push that show or movie to the side. Your body takes first priority and keeping your body safe should always be a goal when working on overcoming self-harm. You can always go back and solve the mystery later – when you are prepared and feeling safe.