Halloween, Self-Harm and the Fascination with the Color Red

Being the season of witches, zombies, vampires and clowns, anything is possible. Strange, odd pranks are expected and people wait hours, huddled together in blankets, to spend twenty minutes on a haunted hayride. (I recently experienced this and it was more than worth it.) However, along with carefree traditions and stomach aches from candy overdose come aspects of Halloween that sometimes bring anxiety and unsafe thoughts to those overcoming self-harm: scars and the color red.

I’ve never been a fan of using the word “blood” when discussing self-harm because it can sometimes trigger dangerous thoughts for those who self-injure. For some, just hearing the word can give them the push they need to use their unhealthy coping skill of cutting or burning their skin. Instead of using that word during the Halloween season, I prefer to use the word “red” simply because it is a more comfortable, neutral word.

With the many television shows and movies focusing on zombies and vampires, no wonder there is such a fascination with “red.” However, many people who self-harm are already intrigued by “red” and being surrounded by the media that almost romanticizes it, it’s not surprising that those who self-harm feel the urge to hurt themselves. Also,especially for the younger population struggling with this addiction, walking past costumes covered in “red” when trick-or-treating is not always easy to handle with a smiling face.

Some people self-harm because the sight of “red” intrigues them. Many people do not understand this fascination and even though this was not an interest of mine when I struggled with self-harm, I do see how difficult it can be for those who are surrounded by “red” during the Halloween season. 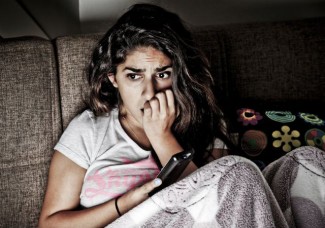 Recently on Time Hop, one of the many popular social media apps out there, I found a group of pictures from three years ago during my last year in college when a group of us participated in Haunted Halls. Each residence hall made a haunted house and students walked through all of them, deciding which one was the scariest. Of course, we all wanted to play a part and my character was to dress as a hospital escapee – long white shirt (hospital gown), unwashed hair, hospital bracelet and dark bags beneath my eyes.

When I looked at the pictures Time Hop had found, I realized that “red” was painted all over my arms, legs and face – of course to make the scare factor a little more extreme. Looking back, I felt a little uneasy when seeing the paint on my arms, knowing a couple years before that picture had been taken I had been struggling with self-harm, the real deal.

Do Not Surround Yourself With Self-Harm Triggers

Even six years later, little things such as a picture still bring me back to those scary times in my life. For those who are currently fighting their addiction with self-harm, seeing characters covered in blood (yes, I said it) can sometimes make them want to drop their candy and find a sharp object. Sometimes, all it takes is the sight of “red” to make someone uncomfortable and today, with the shows and media surrounding us, it is impossible to ignore. The most you can do is find ways to distract yourself when something does trigger you in such intense ways. Don’t purposely surround yourself with people who dress in costumes covered in “red” or watch shows that tend to be graphic in that sense.

Halloween is the time of year when you can be whoever you want to be and act a little strange -- and get away with it. Don’t let your surroundings affect you to the point of turning to self-harm as an answer. It isn’t worth it when you could be stuffing your face with candy or spending time with people who genuinely care.

APA Reference
Aline, J. (2014, October 31). Halloween, Self-Harm and the Fascination with the Color Red, HealthyPlace. Retrieved on 2021, April 22 from https://www.healthyplace.com/blogs/speakingoutaboutselfinjury/2014/10/halloween-self-harm-fascination-color-red