For 32 Million Families: A Cheating Partner Is Not Your Fault

Attention 32 million families of the Ashley Madison hack: a cheating partner is not your fault. Josh Duggar, the former head of an anti-gay hate group that preaches "family values" is a sex addict who is making it out to be his wife's fault that he cheated on her. His words, not mine.

According to a New York Daily News article, "there will be some suggestion of whether or not she should have been more aware of the pressures Josh was under, of the issues he was facing, and how she could have better counseled him or helped him." Divorce "is not even something that will be discussed."

It's unknown if these are her words or her husband's words. Either way, these words reveal the lie that the victim is somehow to blame for abuse--and treating your partner as part of a harem and blaming him or her for it--is domestic abuse. Maybe you're feeling this way because you're one of the 32 million stories of adultery exposed by the Ashley Madison hack. The fault lies with the cheater, not you. Abuse is not your fault.

How Is A Cheating Partner Abusive?

In order to fight abuse, we need to know what it is. Some forms of abuse include 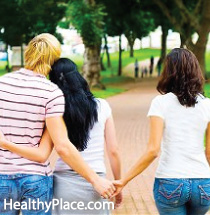 't describe Duggar's marriage, I don't know what does. She is the frustrating enigma--Why does she stay? After all, Mrs. Fogle filed for divorce the second she saw what her husband was and the whole country is behind her. Because Duggar doesn't recognize she's being abused--this is her normal. People, especially church people, don't realize that just because there's no violence doesn't mean the relationship is not abusive. People need to be empowered to recognize cheating as abuse and to resist it.

How to Empower Someone to Resist Abuse with a Cheating Partner

Even if Duggar did recognize that she is being abused, she can not stand on her own two feet. She has no education, no job skills, no life experience. She was raised to be a chaste wife and faithful mother of many children. She was taught that her job was to support her man at all costs. She was everything her faith demanded she be, but that wasn't enough. She's in an unenviable situation--she can't divorce because her community would turn on her even though it would be a Biblical divorce, and she's being blamed for not being a good enough wife. She is not empowered.

I come out of a similar religious background--in fact I was taught at school that an abused woman should separate but not divorce her husband because divorce is a sin--but my parents insisted I get a college education. They insisted I develop some real world skills and get job experience. I was taught that it was my decision whether or not to get married--and I was briefly engaged until my now-ex cheated on me. I am considered somewhat of a social liberal by most mainstream Christians because I chose my career over a man; it doesn't matter that he was no good. I am empowered.

So how do we empower people, especially women? Education is essential, as is life experience. We need to give our children an accurate assessment of who they are and what they can do. We need to teach them to stand on their own two feet. We need to teach them it's okay to be single--the Apostle Paul, after all, encouraged his single readers to remain single and wished everyone in the church were single (1 Corinthians 7:7-8). Someone with all these advantages would do what I did when my ex cheated on me--refuse to be mistreated. But this takes a person with high self-esteem and assertiveness.

Building Self-Esteem If You Have a Cheating Partner

The key to self-esteem is self-knowledge. You need to know who you are, know your boundaries and how to stick to them, know what you believe and why, know what you are capable of. This all rises to the surface when crunch time comes.

You are either made in the image of God or the pinnacle of evolution, depending on what you believe, and that makes you special. You deserve to be treated the way you treat other people--a faithful wife deserves a faithful husband, and vice versa. You have the right to direct your life, because you know best what works for you--you are competent to manage your own actions. You deserve to be treated with respect and faithfulness by your spouse. Anything less than 100 percent is cheating.

Stand on your own two feet or be walked on. The choice is up to you.

Tags: cheating is not your fault cheating partner

APA Reference
Oberg, B. (2015, August 24). For 32 Million Families: A Cheating Partner Is Not Your Fault, HealthyPlace. Retrieved on 2022, August 8 from https://www.healthyplace.com/blogs/recoveringfrommentalillness/2015/08/attention-32-million-families-abuse-is-not-your-fault