Recently, I remembered the time I was kicked off a mission trip to Mexico because of my "demonic influence" (depression). It's a wound that has not yet fully healed, largely because it altered my career path (I was going to become a missionary until my diagnosis became a big red flag). Many christians believe three lies about mental illness.

The Bible is an excellent guidebook on how to live one's life. It is not, however, a science textbook.

If we take the Bible literally, demon possession can manifest as epilepsy, deafness, muteness or several other symptoms--Jesus healed a deaf-mute boy whose "demon" caused convulsions and often threw him into the fire or into water (Matthew 17:14-20, Mark 9:14-29, Luke 9:37-43). While there are churches that equate any kind of physical illness with demonic influence--I was in grief therapy with two women whose father was told to treat cancer with a daily dose of Jesus rather than chemotherapy--most churches have an advanced enough understanding of science to know that there are physical causes for these disorders. Why is our understanding of mental illness any different?

Many churches that equate mental illness with demons take their teaching from Dr. Neil Anderson. However, Anderson once wrote

“Consider what happens, however, when a prayer request is given by someone who is depressed. A gloom hangs over the room and a polite prayer is offered: ‘Dear Lord, help Mary get over her depression. Amen.’ The Christian community has not been taught how to respond to emotional problems. There is no cast to sign, and everyone is silently thinking (or the depressed believe that others are thinking), Why doesn’t she just snap out of it? I wonder what skeletons she has in her closet? If she would just pray and read her Bible more she wouldn’t be in such a state. No sincere Christian should be depressed. There must be some sin in her life. These critical thoughts are not helpful to the depressed person and often aren’t true. Contributing to a person’s guilt and shame does not help mental functioning. We must learn to reflect the love and hope of God who binds up the brokenhearted. ... Christians are no more immune to endogenous (i.e., from within the body, or physical in its origin) depression than non-Christian people. Therefore, it is wrong to jump to the conclusion that it is a sin for a Christian to be depressed.”

Christians need to learn that mental illness medication helps. Exorcisms do not.

I read a book about a pastor diagnosed with bipolar disorder. Although a talented communicator and qualified minister, he often heard, "I hear you've got a case of 'the nerves.'" This phrase usually preceded a closed door in the form of a job opportunity not offered. 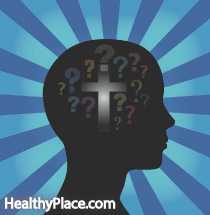 I've often said that I've never lost my job due to my substance abuse, but I've lost several due to my mental illness. Ironically, the same people who try to sell the power of positive thinking are the ones who are quick to assume that mental illness renders one incapable of leading. Nothing could be further from the truth.

We would never believe anyone with a broken leg is incapable. So why is our attitude toward mental illness any different?

Mental illness is not "a bad day." It is a physical problem that happens to manifest in the emotions. People can no more snap out of mental illness than they can snap out of a broken leg. People with mental illness need treatment from a competent mental health professional. Prayer and Bible study are not going to work.

I believe that God gave doctors wisdom to treat mental illnesses. God can use medicine to liberate people from crippling depression. There is nothing in the Bible that forbids seeking medical treatment.

Three Warning Signs of Unhealthy Spirituality
Fighting Flashbacks: Coping Skills for the Symptoms of PTSD
Tony Weerts
October, 13 2018 at 2:48 am

Even when people are cruel and place negative labels on us, Jesus does not. He loves all of us. I have schizo effective disorder and Jesus has been there for me when people have not.

I am currently a caregiver to one of my family members. Both of us are Christians. We believe that God is the Father who created this and other worlds. And he gave his only son, Jesus to die for the sins and sickness of every human being in this world. Although we have our difficulties sometimes, we stand on God's Word of faith, hope and healing for her everyday. There is nothing too hard for God to do. There is a reason for everything God allows to happen. Sometimes we bring sickness upon ourselves with our freewill of choices but yet again, put your trust and faith in God and He will heal you at his divine timing.

i have bipolar type 1, sometimes it does feel like I'm demon possessed. I am also a Christian and not all Christians believe in demon possession.

Depression runs in our family, on both sides. My niece has been hospitalized 3 times in the past year with suicide attempts. Her best friends, all Christians, have decided to distance themselves from her somewhat. They believe that she must not have enough faith in God, which is why she is depressed. Family members have stepped in and are helping her now. Since many of us have trouble with bipolar and depression, we're best able to help her navigate this. It's funny that the younger people are weird like that while the people my age that I've told (and I haven't told many), are very caring and regularly ask how I'm doing. It's always pretty obvious when I'm depressed, so my friends can always tell anyway.

This is why I can not get decent mental health care in Georgia. I have been told on more than one occassion that I should "pray" away my illness.

Jesus gives us the ability to live with it. I am diagnosed schizo effective. People judge me, think me to be weird but I'm grateful that Jesus doesn't feel that way about me. Jesus loves everyone no matter our infirmities our shortcomings.