Recently I had an upper endoscopy to find out why I was having stomach pain and nausea. The study basically confirmed what I already knew--there is inflammation in my stomach. Someone remarked to me "It must be good to know it's not all in your head!" That made me think about what often happens when psychiatric patients need medical treatment.

Ignoring Medical Symptoms Can Be Deadly

When I was at one hospital, we had a patient government that served as our way to tell staff about our problems with unit life. One patient spoke for all of us when he said, "We shouldn't have to beg to see the doctor." Medical symptom neglect was common because staff made one or more of the following assumptions: it was all in our head, we were trying to get drugs, we didn't know what was really happening to us. 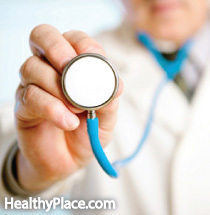 This nearly turned fatal on one occasion. Eric, a recovering drug addict with bipolar disorder, started having pain in his lower right abdomen. He told staff and they ignored him, citing his history of chemical dependency. He kept telling them he was in pain and they allegedly threatened to put him in restraints if he kept asking them for medical treatment. This went on over the course of five hours, when his appendix finally ruptured. He was taken to the local hospital and admitted with advanced appendicitis.

He was at the hospital for several days and I wrote in my journal that it was probably to make sure he got painkillers. When he returned to the unit, staff refused to give him his prescribed painkillers, again citing his chemical dependency. The unit psychiatrist allegedly was enraged that the surgeon administered morphine.

Eric was lucky. I know of one incident in which a woman collapsed in the psychiatric ward and was assumed to be "acting out." She died without so much as an orderly checking on her.

I was injured when I was at another hospital. Staff refused to let me see a doctor so I told the psychiatrist I was in pain. He said the bed mattress was probably responsible and promptly proceeded to ignore the problem. I told him that I had numbness and tingling in my hands as well as a history of paraspinal spasms. This went on for four months because staff would not let me get medical treatment for my back injury. I now have chronic back pain as a result.

The problem was not unique to this hospital. I was once on the transitional unit at another hospital in Indianapolis when I began having pain in my lower right abdomen. I asked four times to be allowed to see a doctor before they let me go to the emergency room, where I was diagnosed with a kidney infection. Another time I was asked if I was a hypochondriac, even though I was being treated for necrosis. And on yet another occasion when I had a concussion, the doctor did a field exam and discharged me in spite of the fact that I didn't know what month it was.

Psychiatric patients deserve to be taken seriously when we need medical treatment.

Dealing with Catastrophic Thinking and Anxiety
Boundaries and Self-Care Are Vital to Mental Health Recovery
Marianne
February, 2 2016 at 11:26 am

That story about the woman patient in a psychiatric hospital probably happens more than we realize. The staff were just used to dealing with patient's mental complaints and never gave them the respect and attention they needed insofar as their physical problems were concerned. Totally turning a deaf ear to one who is in substantial physical pain. The old standby 'it's all in your head' has got to stop! People regardless of their mental health condition, are most certainly aware of what is going on inside their body. This negative attitude to a patient by the psychiatric staff can result in the patient's death and possibly the staff member can end up being sued or the facility. Mental patients are not 'numb-nuts'! And that is my two cents worth.

This remark exhibits great and stir up many problems in psychiatric daily practice. So it should be mindful with psychiatric patients, particularly when they manifest any somatic disorder. Indeed, in psychiatric care system exist precise criteria for authentic treatment and management of psychiatric patients, which ones predict and prevent any serious physical disease. The crucial rule is to except any somatic disturbances in front of admission any patient for, both inward or outward psychiatric treatment. on the other hand it ought to check up complete somatic and neurologic status, in order to investigate any organic disorder. Without this protocol of treatment, it might to ignore any serious medical illness. Beside these remarks in clinical psychiatric work-out have got many side effect of psychiatric medication that should be treated medically. It means that any somatic symptoms and sufferings should examine carefully and in consequence it ought to treat with appropriate medication or any needful medical intervention.

That's wrong on so many levels. It's absolutely inhumane!
I was on a psych ward once where I listened to a woman complain all night about the physical pain she was experiencing. The staff were rude and impatient with her. They demanded she stop complaining, then decided to gnored her completely. She died during the night.