What Is Dissociation? Part 2: Derealization

I remember a certain meeting with a girlfriend in a coffee shop. I arrived before her and sat working on a crossword puzzle while I waited. It wasn't long before she was standing next to me saying, "Hi!" I looked at her, and even though I knew my purpose in the coffee shop that day - to meet her - it took me a moment to understand who she was. It was a jarring moment in her Dissociative Identity Disorder education. "You didn't recognize me," she said. She was right. I didn't immediately recognize her, even though by then we'd spent hundreds of hours together. But it wasn't amnesia, the form of dissociation one might suspect, that prevented me from recognizing her. It was a different dissociative symptom: derealization. 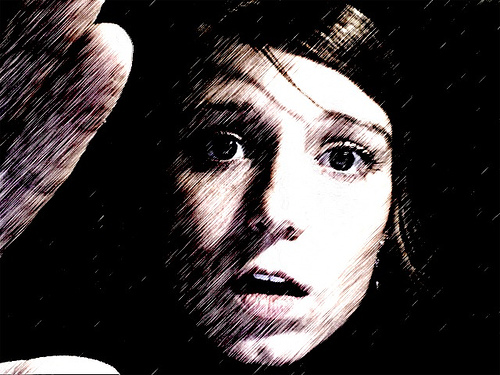 On Monday I talked about depersonalization, one of the five primary forms of dissociation. Derealization is another of those five core dissociative symptoms, and a common experience for people with Dissociative Identity Disorder. Dr. Marlene Steinberg explains in her book, The Stranger in the Mirror:

The feeling that the world around you is unreal or that events are not really happening is called derealization.... Instead of the déjà vu feeling that new places and people are familiar, you have the opposite feeling: that people or places that you should know very well are unfamiliar. You feel estranged or detached from the environment or have a sense that the environment is foreign to you or is not real.

Derealization isn't something only people with Dissociative Identity Disorder experience. It can manifest in response to:

For people with DID, derealization is often chronic and not a result of immediate trauma, drug use, or exhaustion. There was nothing unusual going on in the coffee shop that day. I'd had plenty of sleep. The only drugs I'd ingested were prescription drugs that don't cause dissociative side effects. Nothing traumatic happened. I was simply relaxing with a crossword puzzle, waiting for a familiar face in a safe environment. I wish I understood why I experience derealization so frequently and under such normal conditions. But for now, all I know is (1) what this form of dissociation feels like, and (2) that it, along with the other four dissociative symptoms, is a regular part of my life. Hopefully in time I'll understand more.

APA Reference
Gray, H. (2010, September 23). What Is Dissociation? Part 2: Derealization, HealthyPlace. Retrieved on 2021, May 6 from https://www.healthyplace.com/blogs/dissociativeliving/2010/09/what-is-dissociation-part-2-derealization

What Is Depersonalization in Dissociative Identity Disorder?
What Is Dissociation? Part 3: Dissociative Amnesia
ben carr
August, 27 2016 at 9:08 pm

all my life i have been in familiar places and when i go back to those places its like they are situated opposite,(like an optical illusion) such as an intersection in town. then i have to try to remember how it is situated normally and soon the picture of that intersection becomes familiar again. but until that moment in am in a fog of which way to go. does this have a name? now that i am older it happens rarely.

hey guys im new here. I just wanted to start off saying im depressed and have been since about 10th grade is when it started to really be bad. I remember me and my parents always fighting because of bad grades when i was a kid and i remember even being scared to see them and go home. The divorce of my parents occured through out my childhood and id always see them arguing and it felt as if i had to choose sides and when i did i was betraying the other parent, shit sucked.. I also remember i was in a relationship pretty much my first love, easiest way to say it is that things didn't work out and i ended up feeling as if something was wrong with me and i just wasnt good enough. i dont feel emotions as intense as i used to it feels like its being blocked by a barrier in my body and i just cant reach deep inside me. I also had a brief period of about 8 months where i was suffering from derealization and minor DP where i felt life was a dream which ive learned to live with and it doesnt bother me anymore, and i had minor DP in the sense where i would feel my body once in a while feel like its floating away and above my torso. I haven't felt those in a while but ever since i moved in with my dad and have gotten kicked out ive been questioning myself, my ego and who i really am. And once i start thinking about that it starts, i feel like im in the wrong body and as if there's just another side of me shut down and as if my thoughts werent my own but i know its me and its me saying these things. It's just very confusing. Sometimes wen i look in the mirror its scary as shit because sometimes i dont recognize myself and question if what im feeling is whats really in the mirror and i cannot link it together. It seriously sucks and it feels like im about to lose control and any given moment even tho i know im not. When i think of myself i dont have a good picture of who i am spiritually or physically, i seriously have no clue... i feel like im stuck in my thoughts and in my own misery and im just living life by the motions and movements, ive kind of learned to notice it and let it pass me but sometimes it gets the best of me and i def get the shit scared out of me. I'm just wondering what this could be and if there was a name for it? thanks so much

Hi Joshua,
Based on your description, it sounds like you struggle with moderate to severe dissociation. It may not be Dissociative Identity Disorder or Dissociative Disorder Not Otherwise Specified (DDNOS) but that doesn't mean it isn't serious. Remember that dissociation is not exclusive to dissociative disorders and can occur with other conditions - PTSD, for one - or as a transient coping mechanism due to overwhelming stress. And it's clear that you've lived with high stress for a long time.
Please understand, if you can, that these episodes of derealization and depersonalization are manifestations of a brain under duress. They are a way to give your psyche some distance. It's confusing and uncomfortable, but that doesn't mean something's wrong with you. In fact, the opposite is true. There's something very right with you - your mind knows what to do to give you some protection, some distance from that which creates the most stress for you. As those things -whether they be memories, emotions, pain, etc. - become less and less overwhelming, your dissociative symptoms will decrease in intensity and frequency.
So how do you do that? How do you make those things less and less overwhelming? I don't know if you have insurance, but talk therapy can be extremely beneficial because it's a safe, private space to voice things you might otherwise have no one to talk to about. Writing is also helpful for many people, particularly in conjunction with talk therapy. Art, too. Anything that allows you to confront the things your psyche is trying to protect you from in a safe way so you can gain perspective and whittle those things down to size.
It can take time to investigate therapy options and find a therapist. But you can start this process immediately by doing these things:
1. Breathe deeply. I know it sounds stupid, but breathing deeply makes your body feel safer and your mind feel calmer. Take 5 minutes out of every hour and just close your eyes and breathe deeply.
2. Write for 15 minutes a day. Just grab paper and pen and write. It doesn't matter what you write. And you can burn it afterwards if that feels safer to you. Just write. And don't stop for 15 minutes straight. Let whatever comes to mind come out on paper, no matter how nonsensical or mundane it seems to you.
3. Get enough sleep. De-stressing is really important because your mind is already under a lot of stress. Sleep is one of the best ways to de-stress. If you have a hard time sleeping, consider taking melatonin - it's a natural sleep aid and it's afforable and easy to find.
I hope you'll keep talking here. Dissociative Living readers absolutely understand how scary and confusing dissociation can be. And getting validation and support from others is a big part of whittling those stressful things down to manageable size.

You mentioned that you were working on a crossword puzzle when this happened. Sometimes I find that when I'm concentrating on something, whether it's a specific task or reading a book or watching a movie, if someone interrupts my train of thought by speaking to me, it may take me a little while to recognize them. I'm not sure why this happens either. It's like my brain has to catch up with reality. There's a lag time involved. I think it has something to do with being able to dissociate so easily, it "does something" to the brain. This is just a theory though.

Hi Carla,
Thank you for bringing that up. I hadn't connected the derealization with being engrossed in a task, but now that you mention it that makes very good sense. It took me a long time to notice that not everyone reads like I do, for instance. Not everyone falls so deeply into a story that the world around them ceases to exist. I do though, and I've no doubt that you're right about the connection between total immersion in something and an episode of derealization when pulled abruptly out of it. How interesting. Thank you for sharing that, Carla.

I have recently discovered this site & have finally found a place I can relate to. It seems any info I found on DID was extreme "Sybil" like stuff. I'm not like that & have many times doubted my DID diagnosis because I didn't experience it like the movies portray.
What you've described above is something I experience quite a bit. Not just w/ people I know that I know, but can't find their name or face, but also w/ tasks I've done a thousand times, but suddenly forgot how or driving somewhere & all of a sudden can't remember how to get where I'm going or where I am at the moment.
A GPS has really helped the getting lost thing & I have learned to make step by step instructions for important tasks that I can refer to at work to help me get through times I can't remember how to do something.
I make a lot of notes to keep me on track. Not full proof, but it helps.

Hi Lenore,
Thanks for commenting.
A GPS! That's a great idea. Without certain technological advances - email & cell phones, for example - living with Dissociative Identity Disorder would be much more difficult for me. But I admit I've never thought of a GPS.
Welcome to HealthyPlace, Lenore!