One of my biggest regrets from my drinking days is that I wasn't a support for my grandfather when he was dying. We were very close throughout my childhood and adolescence, but when he experienced a recurrence of cancer I was totally immersed in my alcoholism. My mother and I lived with my grandparents for some of his last months, but I was more harm than help. He died a few months before I got sober and for years, my wreaking havoc on my family during this difficult time pained me. For the last seven years I have experienced troubling recurring dreams involving my grandparents and their home, which was a happy and magical place for me growing up. 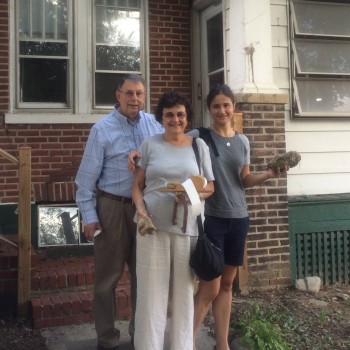 Within the last month, I had the opportunity to visit my grandparents' home of nearly 50 years and offer an apology. Making amends is, for most people, a part of life. Whether it's being a jerk to our parents during our teenage years, not standing up for the bullied kid in school or being a parent who chooses to drink rather than spend time with their kids, most people have things they wish they could do over. For me, both as a person and as a recovering alcoholic, apologizing and making amends directly to those I've harmed is extremely important.

One of the best-known steps in 12-step programs is the ninth step, which involves making direct amends wherever possible. Personally, I believe acknowledging and attempting to repair the harm one has caused (and we all cause harm) is good practice for addicts and non-addicts alike.

I like to think of it this way, I don't want to fear running into someone today because of something I did to them in the past. There are still people for whom this is the case for me, most often because I blacked out and don't know whether an amends is appropriate or not. So I do not have a foolproof formula for setting things right. But I feel that we addicts experience enough fear without letting something fester that could be addressed.

Amends Outside the 12-Step Format

Addicts aren't the only ones who can benefit from this way of thinking either. Sometimes, for example, other mental illnesses require making amends. I also don't think 12-step programs offer the only method for addicts to make amends. I like the approach because it is deliberate and direct, but other approaches exist. The father of a friend of mine stopped drinking within the past year. He is not a member of a 12-step program and he has not, to my knowledge, explicitly apologized for his past behaviors. He has, however, acknowledged that he was not always a loving father or husband. He is also much more involved in the family's life now, tells his family he loves them and tries to help them however he can. My friend says that all this implies he is sorry and that they have an understanding between them. She is okay with that, as long as he keeps on the straight and narrow, and today they have a good relationship.

The biggest way I made amends to my grandfather was by helping to care for my grandmother after he passed away, and by staying clean and sober. Sojourning to their house and saying the words out loud that I would say to him if he were still alive was meaningful to me, but I feel like my real amends to him comes through my actions in life. Still, making a sort of pilgrimage to their house before it is torn down felt like the right thing to do. I don't know if he heard my exact words that day, but since I spoke them, my sleep has been peaceful.

Addiction is Selfish, and So Is Recovery
Filling Your Time In Recovery Without Drugs and Alcohol
Kira Lesley
September, 7 2014 at 6:34 pm

Thank you Peter. Then I hope he likes being mentioned on a board about mental health! He really did love medicine and healing. If it was apparent to me, how much more apparent it must have been to you children who grew up with him still practicing full time!

Kira,
A nice piece you wrote. I think you should know (and probably do) that your grandfather was uniquely concerned with the health of the human race. There will never be another