A Stuffed Animal Helps Me Cope with Schizoaffective Disorder 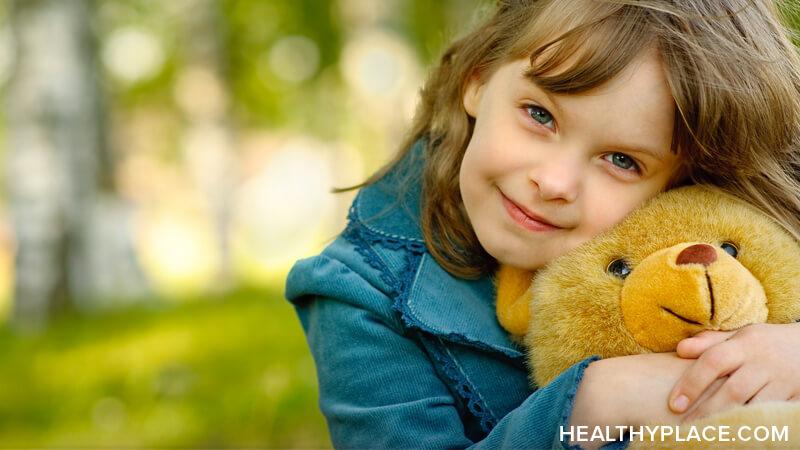 My husband Tom and I have a cat. But, he’s no ordinary cat. He’s an ageless stuffed animal cat modeled after the character Puss in Boots from the Shrek movies. Even though he’s not a living, breathing pet, he feels like part of the family.

My Stuffed Animal Is Comforting for My Schizoaffective Disorder

We named our stuffed animal cat after my parents’ cat George, who was not only real but larger than life until the day he died last fall at the age of 18. Tom and I have had our George since before we were married in 2008. My dad calls him “the phony-baloney George.” But now, he’s the only George left. (Insert sad face emoji here.)

At the shop where we found George, you don’t pick out a ready-made stuffed animal and just buy it. You are part of the process while store employees make it. Our George was kind of skinny when the woman filling him with stuffing was first making him, so I told her I wanted more stuffing. Then he looked nice and plump and cuddly.

We also gave him a transplant--a ticking heart. When you squeeze George’s chest in a hug, his heart beats four times. Tom and I are surprised his heart has lasted so long.

Tom and I made up a whole history for George. He is the defender of ice cream. He defends it from dragons who make it melt by breathing fire on it. George turns the dragons into babies, who can enjoy the ice cream.

George is comforting for my schizoaffective disorder. I hug him when I’m feeling sad, which is quite often. He’s sort of like a support animal. Maybe he’s more like a security blanket.

I Feel Unable to Take Care of a Real Cat

Both Tom and I “talk” for George. We have created quite a distinct personality for our little stuffed animal. Even though Tom and I are in our 40s, George sits with us when we are watching TV or movies with “mature content.” We just aren’t as mature as George is. Also, George doesn’t like that I shave the “fur” off my legs. He’s afraid my legs will get cold.

Maybe you’re thinking about now that I’m not taking my medication for schizoaffective disorder, and that Tom needs to be on psychiatric medication, too. But, for us, making up stories about George is fun and harmless.

You also might be wondering why we don’t get a real cat--make that biological cat. The answer is kind of sad: partly due to my schizoaffective disorder, we just don’t feel up to taking care of a live cat. Hey, it’s better that we figured that one out before we got a real cat.

We’ve had George for nearly 12 years now and, this may sound silly for an adult, but I have real feelings of affection for him. Pay attention to that word--silly. That’s possibly the worst thing about me and Tom making up an imaginative story and personality for a stuffed animal. But for all the comfort this stuffed animal and his pretend antics bring me and my schizoaffective disorder, I’d say being silly is worth it.

It doesn't matter if people think it's silly. I have Doggersz and he is scared of being left alone in a house fire so I take him with me everywhere I go. It actually makes people mad wen they see him and if they ask about him they seem to understand some what but the look on their face is still one of judgment. Doesn't matter, Doggersz has helped me in ways no one and nothing ever cld. Besides, I think they are just jelaous bcuz they can't see the magic within the things that we can, and maybe they wish they still had that sight.
Thanks for posting.

Dear Kelsey, Thank you for your comment. Yes, you're right, it doesn't matter if people think it's silly. If it works, it works. I love what you said about seeing the magic in things. That is a beautiful sentiment. Take Care, Elizabeth

I love when you bring "stuffed" George over for dinner. Your voice for him is so cute too! Dad is so funny lol. I love you Elizabeth thanks for posting this ❤️❤️