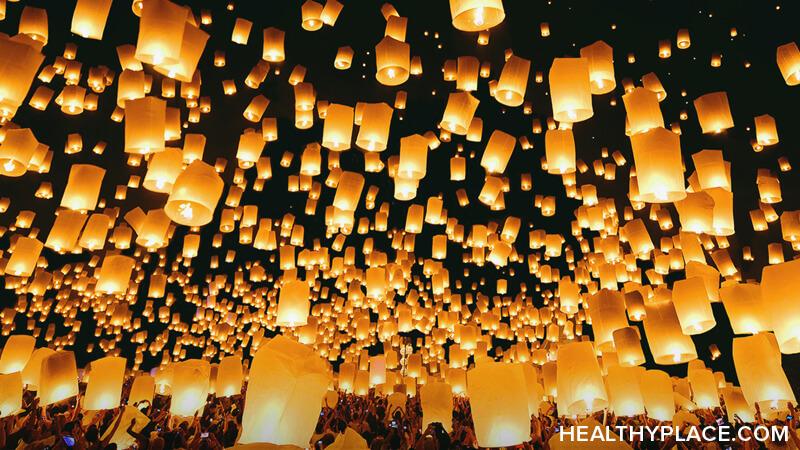 At First, It Felt Wrong to Celebrate the Anniversary of My First Schizoaffective Episode

It was my therapist’s idea to celebrate my schizoaffective episode. She thought it would help me reframe my break with reality in which I thought everyone from a long-distance friend to George Harrison to the mafia was following me and communicating with me. Reframing is a cognitive behavioral therapy term that means to look at something from a different perspective.

Flash-forward to 20 years after the episode. I was living in the same apartment with my husband, where we still reside. We decided to celebrate my schizoaffective psychotic break with two chocolates that looked like the ruby slippers from The Wizard of Oz, and to watch that movie, Munchkins and all. The reason The Wizard of Oz was the theme is that I’ve always felt my psychotic break was like being in Oz.

We didn’t get through the whole movie. I felt that the idea of “celebrating” my episode was making me feel worse, not better. I thought it had all been a mistake. I didn’t blame my therapist--she had simply had a bad idea. Nobody’s perfect. She’s had lots of good ideas, and the celebration turned out to be one of them in the end.

Celebrating My First Schizoaffective Episode's Anniversary Was a Good Thing

Looking back, “celebrating” the 20th anniversary of my schizoaffective psychotic episode was a good thing. I’ve been able to see and appreciate how different my life is now. Yes, I sometimes hear voices. Yes, I’m fat because of the medications I take for my schizoaffective disorder. Yes, I have schizoaffective mood episodes, even if they aren’t full-on psychosis. I could go on and on about all the things that are wrong with my life--but can’t everyone?

Celebrating my schizoaffective psychotic episode made me realize I pay way too much attention to the fact that I had a psychotic break in the first place. The bottom line is that my break with reality made me and my support team realize I needed mental health treatment. I had been extremely manic for months and months before then, and it was affecting my college schoolwork and my relationships with the people around me.

But my point here is that by reframing how I looked at the episode, I was able to let it go. So, my therapist and I didn’t make a mistake after all. In the short term, yes, it was very uncomfortable. In the long term, it set me free.

Will you celebrate the anniversary of your first psychotic schizoaffective episode? Why or why not? Share your thoughts in the comments.

Celebrating such condition actually might be harfull for few, some patients can deny some of the illusion of their episodes and carry them as reality, therefore the episodes can be extremily complex in their view, the psychetrist has no choice but to ask the patient to try and forget everything that happened throughout, some do not agree with such decision but it can a key factor in many cases.