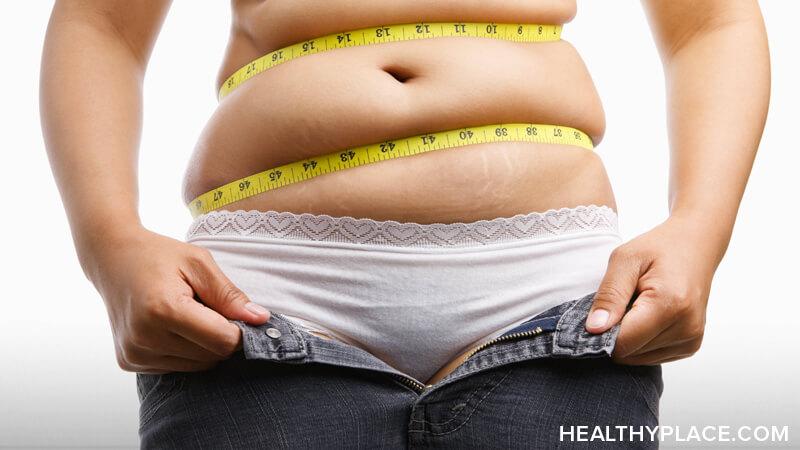 Weight Gain from Medication Is a Cruel Side Effect

Make no mistake, extreme weight gain due to medication to treat schizophrenia or schizoaffective disorder is a cruel side effect. I’d always effortlessly been a size two before I went on this medication. Now, I’m a size 14. My body weight almost doubled from 100 pounds to 175.

So, without much help from doctors, I’ve come to terms with the weight gain caused by my condition and treating it. It’s been a long and continuing process. In my 20s—when I was in college and graduate school—my doctors tried medication after medication to find one that worked for me and didn’t cause weight gain. We didn’t find a single option that took care of both.

I have a great psychopharmacologist whose testimony was instrumental in winning me Social Security disability benefits. It’s just that, well, she’s a doctor. She prescribes the medication, but she’s not the one whose body and brain has to deal with the effects of it for my mental disorders. I have had other doctors without her level of expertise, doctors who almost flippantly told me I had more to worry about than weight gain.

One thing I really like about my psychopharmacologist is that she’s a feminist. And feminism has been crucial for me to develop a positive body image while remaining overweight. Well-meaning people ask me why I can’t “just” exercise and balance my diet. I try to get out and exercise and to decrease my sugar intake, but I don’t want to become a slave to the diet industry. And even those efforts reduce my weight by a mere few pounds. Feminism is what allows me to make the positive distinction in my life choices.

Yes, I am grateful to my psychopharmacologist. But that doesn’t change the fact that I’d rather not need one.

Baths vs. Showers and Why This Schizoaffective Prefers the Bath
The Unpredictability of Living with Schizophrenia
Lila Ewing
November, 15 2017 at 10:46 am

I have bipolar,bdd,bpd.i was a size 8 then,aended to a 14 form all my meds.i do work out but only shed a few kilo.it is still a struggle dealing with the body change,even 7 yrs later.

I gained 9 pounds in 4 days on my anti-psychotic drug!!