Sexism's Effects on My Early Life

The year was 1991. The "riot grrrl" movement (feminist punk rock) was at its inception, but unlike twelve-year-olds today, I did not have access to the Internet, where I could have learned about riot grrrl. Like most twelve-year-olds in any era, I wanted to branch out and become part of the larger culture, and the only vehicle I had into the culture of my era was television.

What was on television at the time was problematic for a lot of reasons, but specifically it was very sexist. From beer commercials to Guns'n'Roses videos, young girls were being taught that if they did not look "sexy" in a very specific way, they were worthless. I may have developed depression anyway, but inhabiting a female body with this form of pop culture being shoved down my throat certainly didn't help. 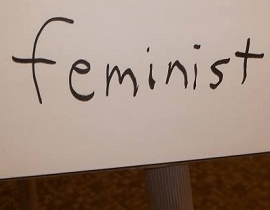 I've looked at pictures of myself from around this time, and I was a beautiful, young girl. But I still didn't look like Axl Rose's girlfriend. And--this was the clincher--I didn't have a boyfriend. I know all young girls get depressed about these things, but my depression over not having a boyfriend gave way to a cavern of loneliness that would haunt me well into my teens and early adulthood, long after I had declared myself a feminist.

Effects of Sexism Include a Girl-Damaging Culture

The book Reviving Ophelia by Dr. Mary Pipher looks into the phenomenon of girls getting depressed by culture-- even to the point of self-harm. She wrote it in the 1990s, when I was going through it. Okay, so maybe my--and other girls'--depression can be explained by what Pipher calls a "girl damaging" culture, but what about schizophrenia and schizoaffective disorder? Surely those ailments have nothing whatsoever to do with sexism?

Nothing happens in a vacuum. Like I said, my depression was the foundation for my schizoaffective disorder. If I was achingly, obsessively depressed-- more so than most girls when I didn't have a boyfriend, and I was either blissfully happy or agitated when I did have a boyfriend, then sexism at least contributed to my schizoaffective disorder, which is schizophrenia combined with bipolar disorder. One time, I even heard my voices say about me, "She's cute enough."

Feminism Helps Me Deal with Sexism and Schizoaffective Disorder

It took a lot of feminism and a lot of time to deal with and ultimately accept the weight gain caused by my schizoaffective disorder medications. I kept trying different medications and my moods and my weight would yo-yo. I think finding a husband who loves me unconditionally made me accept being large. I know that sounds very unfeminist. But what could be more feminist than marrying someone who loves you for who you are, no matter what, even though you're fat and have a mental illness?

Even if you’re not convinced that sexism contributed much to my illness, feminism definitely helps me deal with the bad body image I continue to struggle with. If I ever do find myself feeling bad about my body, I pop in a Margaret Cho DVD. I'm just trying to say that in my life, these aren't two separate issues. They're definitely connected.

How Feminism Affects My Recovery