As if dating isn't already tough enough, schizoaffective hypomania makes dating and love even harder. Those of us with schizophrenia and schizoaffective disorder have a lot to deal with when dating. For example, there’s the stress of being on a first date and wondering when would be a good time to tell your prospective partner you have one of the most stigmatized mental disorders. But perils extend beyond that point and include schizoaffective hypomania triggered by the excitement of a first date. Which begs the question, how, exactly, does someone with schizoaffective disorder differentiate between hypomania and the perfectly normal things one feels when falling in love?

Schizoaffective Hypomania Versus Falling in Love

When I first met my future husband, Tommy, (we’re still together, after almost seven years of 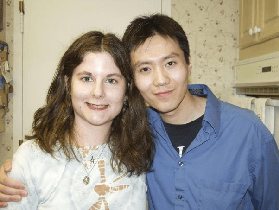 I didn’t say schizoaffective disorder because the schizophrenic symptoms, like hearing voices, weren’t as prominent back then. Ultimately, with my doctors, I came to realize I do have schizoaffective disorder, bipolar type. What I’m trying to say is that I didn’t willfully downplay the scarier diagnosis. I told him the truth as it was at the time.

So Tommy knew I had a mental illness on our first date. It was my first date in a long time, and I was so excited that I got hypomanic. I got so manic, I just stopped going to my job. But Tommy was attracted to what he called my “zaniness.” I knew I loved him and loved him even more when the schizoaffective hypomania quieted down. I feel so lucky that Tommy really was the right one, not a grandiose, impulsive decision caused by schizoaffective hypomania.

Living with Schizoaffective Hypomania—As a Couple

Tommy is so supportive no matter what I'm dealing with: schizoaffective hypomania, depressions or hearing voices. He loves me no matter what. He even jokes around with me about my schizophrenic voices, asking me, “Are the fairies still talking to you?” (When I first heard voices, I thought they were fairies.)

Recently, I’ve been suffering from acute anxiety, which I’m keeping at bay by running every morning. Tommy, again, jokes around with me: “When I married you, you smoked and you were lazy. Now you’ve quit smoking and you run every day. Why did you change?”

Tommy makes me feel safe. I never feel safer than when I’m with him or with my parents. A seven-year marriage is not the product of a schizoaffective hypomania flight of fancy. We’ve been through so much together.

Skipping work should have been a red flag, but I did get my job back. I am just lucky. But we had a long engagement and we lived together for over a year before we were married, so there was time to figure out that this was, in fact, the real deal. And I’m so thankful.

I was diagnosed with schizoaffective in 2011, then had a proper diagnosis of bipolar type 2 later on. I have been in two serious relationships in my twenties, both of them ended terribly. I was open about it with both partners, but found it hard to communicate and often times found myself avoiding communication for days and rather in a dreamy haze often times with my ex boyfriend. I have been feeling as a misanthrope when it comes to romantic relationships and the loneliness screams loudly on some days. I really hope to have a stable partner that I can support but also can support me. How are you able to manage relationships not only romantically but with family members, colleagues and peers? How do you determine if the partner will be a fit for someone who suffers these conditions? I am starting graduate school this year, and am hoping to reap good relationships with like minded individuals although I am quite nervy when in social settings at times.

I have a really tight circle that includes my husband, my family, my doctors, and a good friend from high school. I feel safe around these people. I've learned good communication skills through years of therapy. I know I alienated a lot of potential colleagues in grad school because I was switching my meds so much. I just lucked out with my husband. That's all I can say. I hope that helps! :)

I'm so glad it gave you hope! Everyone has trouble finding love... not just people with this disorder!

I was diagnosed with schizoaffective disorder in 2015 and this post gives me so much hope. Thank you for sharing.