The issue of stigma came up for me recently while I was watching an episode of Family Guy. It was the episode where Lois realizes she has a brother locked away in a mental institution and the brother turns out to be a serial killer. I was offended. Now, I know that
one of Family Guy's main selling points is being offensive. That's pretty much the point of the show. Even though I’m a feminist, I can tolerate the show's misogyny. I could not tolerate stigma against mental illness. But why?

Stigma Against People With Schizoaffective Disorder and Schizophrenia 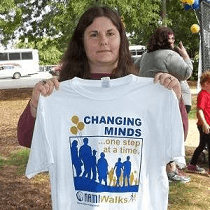 There is feminist outrage all over the internet and other forms of media against sexism. In fact, there was even an article on Facebook about why "Seth MacFarlane's [the creator of Family Guy] Misogyny is Dangerous." But I don't see anyone speaking out against the character of the serial killer from "the loony bin" on Family Guy. That's because fearing and making fun of the mentally ill is taken for granted. And many people fear those with schizophrenia and schizoaffective disorder the most. As someone with schizoaffective disorder, I am feared. I remember a friend once telling me about a conversation she'd had with a classmate. When she told him that I had schizoaffective disorder and heard voices, he said, "I would be afraid the voices would tell her to kill me." People just jump to two conclusions: that if someone is schizophrenic or schizoaffective and hears voices, the voices tell them to kill people, and that the person will do it.

Then there’s another side to schizoaffective disorder, schizophrenia stigma. The side that doesn’t fear mental illness so much as shrugs it off and thinks it doesn’t exist. Here’s an example: someone who assumes they know all about clinical depression because they got depressed when their dog died. It is a perfectly reasonable reaction to life circumstances to get depressed when your dog dies. But you eventually move on, and the depression tapers off. You probably don’t have thoughts of harming yourself. Sometimes, people who have been through experiences like this misguidedly think that because they lived through normal, healthy, situational depression, they know all about abnormal, unhealthy, clinical depression. I’ve gotten more than my fair share of bad advice from people like this. The first thing they tell you is that you don’t really need to be on medications.

The Devastating Effects of Stigma on People with Schizoaffective Disorder, Schizophrenia

At first I was going to end this by saying I try to keep a sense of humor about all this. After all, Family Guy is my favorite TV show. But it’s just not true. I can’t have a sense of humor about it, even on Family Guy. It’s just not funny. There’s too much at stake. It’s not funny that two of my good friends killed themselves, and one of my best friends with major depression died because a simple blood test to show the impact of his medications on his liver was never done. Although Robin Williams’ death was tragic, it did bring up a lot of awareness about this issue. Let’s make sure no one else has to die before otherwise caring people educate themselves about the devastating effects of mental health stigma.

We're a gaggle of volunteers and opening a brand new scheme in our community.
Your website provided us with valuable info to work on. You have done a formidable activity and our whole group will likely be grateful to you.

Thank you! Good luck in your endeavors!