Can We Forgive When There Is No Justice?

As a sexual assault survivor, I have an interest in cases of rape that make the news. Recently, here in Indianapolis, a man was convicted of several sex offenses, including rape. But there was no justice--the male judge looked at the victim and told her she had to forgive her attacker and move on, then sentenced her rapist to eight years of house arrest.

That judge has no idea what he asked her to do. But it raises an important question: Can we forgive when there is no justice?

The Health Benefits of Forgiveness

Forgiveness is literally beneficial for one's health. I did an article on this a few years ago, and learned several things. Among them:

What Alcoholic's Anonymous has Taught me about Forgiveness 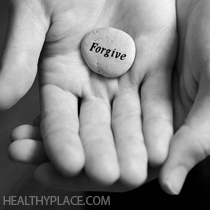 Chapter Five of the Big Book of Alcoholics Anonymous reads: “This was our course: We realized that the people who wronged us were perhaps spiritually sick. Though we did not like their symptoms and the way these disturbed us, they, like ourselves, were sick too. We asked God to help us show them the same tolerance, pity, and patience that we would cheerfully grant a sick friend. When a person offended we said to ourselves, ‘This is a sick man. How can I be helpful to him? God save me from being angry. Thy will be done.’”

Whoever angers me controls me, and whoever controls me destroys me. The Big Book reads :“Resentment is the ‘number one’ offender. It destroys more alcoholics than anything else. From it stem all forms of spiritual disease, for we have been not only mentally and physically ill, we have been spiritually sick. When the spiritual malady is overcome, we straighten out mentally and physically.”

As I said in a previous More Than Borderline post, "People with borderline personality disorder (BPD) are the same way. We’re sick, and our number one killer is resentment. Resentment causes us to resort to unhealthy coping skills such as drinking, binging and purging, and self-injuring. Remove the resentment and everything else falls into place."

Spirituality Plays a Role in Forgiveness

PubMed.gov contains a review of studies on forgiveness. "People are more forgiving toward transgressors if they see themselves as capable of committing similar offenses," the study reads. "Three factors mediated the link between personal capability and forgiveness: seeing the other's offense as less severe, greater empathic understanding, and perceiving oneself as similar to the transgressor. In terms of predicting forgiveness, it was important that people's own offenses were similar to the target offense in terms of both severity and type."

When Does Drug Experimentation Become Drug Addiction?
Is Locking Up People with Borderline the Answer?
Linda Dixon
May, 20 2020 at 3:41 pm

So true. Thank you, Becky, for your insightful post. I value your truth and insight. Love, Linda Dixon, FMC