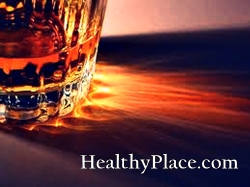 One of the symptoms of BPD, according to the Mayo Clinic, is "Impulsive and risky behavior, such as risky driving, unsafe sex, gambling sprees or illegal drug use". In other words, substance abuse is a common symptom of BPD. For example, I am a recovering alcoholic. The study estimates that 60 percent of people with BPD have a substance abuse problem.

But how does substance abuse affect BPD symptoms? Does it make them worse? The study's conclusion may surprise you.

"There is compelling evidence that comorbid borderline personality disorder (BPD) negatively impact the clinical courses and outcomes of substance use disorders (SUD)," the study's abstract reads. "Conversely, there is little evidence that concurrent SUD exacerbates the clinical characteristics of BPD. " In other words, BPD can make substance abuse worse, but it is unknown whether substance abuse can make BPD worse.

"Female BPD patients without (BOR; n = 37) or with current substance dependence (BSUD; n = 19), and female non-BPD/SUD controls (CON; n = 48) were compared with respect to impulsivity, affective lability, affective intensity, externalizing behaviors, and self-harming/suicidal tendencies, taking into consideration their comorbid mood disorders, anxiety disorders, and antisocial personality disorder. Results indicated that both BOR and BSUD groups scored higher than CON in most of the measures, but BOR and BSUD failed to reveal significant group differences especially when the influence of comorbid psychopathology was removed. "

Conclusion: "The overall pattern of findings remained identical even when comparing BPD patients with versus without the diagnosis of lifetime substance dependence. Our results do not support the notion that BPD individuals with SUD display more severe BPD features than individuals with BPD alone."

A word of warning

Before you break out the celebratory six pack, let me offer a word of warning. I disagree with the study's conclusion because that's not been my experience. When I drink, I'm a lot more likely to self-injure or do something else that I wouldn't do sober. I become a lot more impulsive and considerably more emotional. So in a sense, my alcoholism does make my BPD symptoms worse.

But this is an area that's difficult to study. People with BPD, regardless of whether or not they have a substance abuse diagnosis, often have several comorbid diagnoses that can make BPD symptoms worse. For example, it might be my PTSD and not my BPD that accounts for my conduct while drinking. Or it could be my schizoaffective disorder. We simply don't know because there's too many variables.

Also, as the study acknowledges, BPD makes substance abuse disorder symptoms worse. This in and of itself makes watching substance use a good idea.

I also don't agree with the study's conclusion. I don't have PTSD but I do have BPD which I think is the reason for my substance abuse. I have no problem abstaining from drugs and alcohol and can easily go weeks without drinking. However, when I do drink (even if it's just 2 beers or so) I get extremely "hyper", emotional and impulsive which ultimately leads to more drinking and drug abuse.

Many substances can bring on withdrawal-an effect caused by cessation or reduction in the amount of the substance used. Withdrawal can range from mild anxiety to seizures and hallucinations.Drug overdose may also cause death.^..',
Most up-to-date write-up on our own blog <http://healthdigest101.com/index.php