The Realities of Involuntary Treatment

According to HealthyPlace.com, the National Association of Psychiatric Health Systems reports that 88 percent of their member hospital admissions are voluntary. However, that other 12 percent does exist. Sometimes a person is so incapacitated by their mental illness that he/she may not recognize the need for inpatient treatment. In cases like these, involuntary treatment may become necessary.

Involuntary treatment and your rights 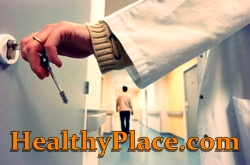 Involuntary treatment can be frustrating and scary, and several myths out there don't help. When I was first diagnosed, I was paranoid that I would be committed to a psychiatric facility. Involuntary treatment, as the above statistic shows, is not the usual path treatment takes.

Involuntary treatment is used only when the person is a danger to self, danger to others, or gravely disabled. The least restrictive means must be followed. In other words, you can not be admitted to the hospital against your will unless you're dangerous, unable to care for yourself, and outpatient treatment or partial hospitalization do not work.

HealthyPlace.com states "Involuntary treatment is sometimes necessary, but it is used only in unusual circumstances and is always subject to a review which protects the civil liberties of patients." While procedures vary by state, you have the right to an attorney--and a public defender if you can't afford an attorney. You also have the right to be present at your hearing unless you are too sick to go. You have the right to appeal as well.

Since the United States typically does not submit to international law, this tidbit may not do you much good. However, the United Nations has decided that all psychiatric patients have rights. These rights are covered in Resolution 46/119, which was passed December 17, 1991.

Principle 16 deals exclusively with involuntary treatment. In short, a person must be a danger to self or others or hospitalization is the least restrictive means of treatment, and the hospitalization must be for a short time and in accordance with domestic law. The Principle strongly encourages a second doctor's opinion, and that this doctor be independent from the first.

In 2008, a psychiatrist began commitment paperwork on me. I was assigned a public defender, who called me once at the hospital to discuss my defense. I was allowed to attend the hearing, and to have a friend present. The commitment stood, and I returned to the hospital to wait for a bed in the state hospital.

I was given five minutes notice of my transfer to the state hospital. I was handcuffed to a chain around my waist and shackled, then driven there in a paddy wagon by a sheriff's deputy.

From there my treatment varies. I have nothing positive to say about Richmond State Hospital; I was often denied medical treatment there (a violation of state law). On one occasion, I was encouraged to lie about my treatment progress in order to make staff look good. My right to appeal the commitment was infringed; staff refused to give me the court's address without the psychiatrist's permission. I suffered some degrading treatment that is still hard to talk about. For example, staff would check on me in the shower and force me to show my naked body was lathered with soap--when I wasn't on any restrictions. I was cursed at on one occasion. I was even denied the right to see a psychiatrist when I was suicidal (which launched a state investigation).

At Larue D. Carter Memorial Hospital, I was treated well. I was allowed to shower with no checks. I was never cursed at. My feelings were taken seriously, and I received medical treatment when I needed it.

Your treatment may vary according to what unit you are on and what hospital you are at; as you can see, mine did. Remember: even if you are an involuntary patient, you have basic human rights. They may not always be honored, but you have the right to fight for them. There's no reason to be afraid of involuntary treatment.

APA Reference
Oberg, B. (2012, January 24). The Realities of Involuntary Treatment, HealthyPlace. Retrieved on 2022, July 4 from https://www.healthyplace.com/blogs/borderline/2012/01/the-realities-of-involuntary-treatment

Is It Possible to Be Addicted to Self-Injury?
How Clergy Can Help People With Mental Illness
Richard McNutt
December, 18 2015 at 12:33 pm

From all you say happened to you, they are all reasons to fear involuntary 'treatment'. It happened...it does happen...it can an will again. A better location that treated you better is only showing that some places suck...others can be decent...and the other doesn't excuse the first one.

UN Assembly General resolutions are non-binding, and therefore not "international law", as you said. What you should do is encourage people to find out what the law your country/state says about patient's rights.

[...] However, no psychiatrist ever has or has even discussed it. And as one person who has had the experience said, “There’s no reason to be afraid of involuntary treatment.” [...]

I find IU would have to agree w/ the commenter Danny; you describe honestly and in detail the horrible treatment you got from the Richmond hospital and how they flagrantly violated you and your rights,even had you handcuffed and shackled like a pound animal, but because you were lucky (and I'm sure any nice treatment from psych staff/facilities is simply luck and no more, sorry)and the later hosptital, you then say "There is no reason to fear involuntary hospitalization".
Sorry, but your article does absolutely NOTHING to support the pro-psychiatry cause, and DEFINITELY NOTHING to support involuntary "care".

"Remember: even if you are an involuntary patient, you have basic human rights."
Someone having drugs forced into their body against their will by definition has had their basic human rights taken away from them.
No amount of spin can change this basic truth.