I May Have BPD, But I'm More Than Borderline 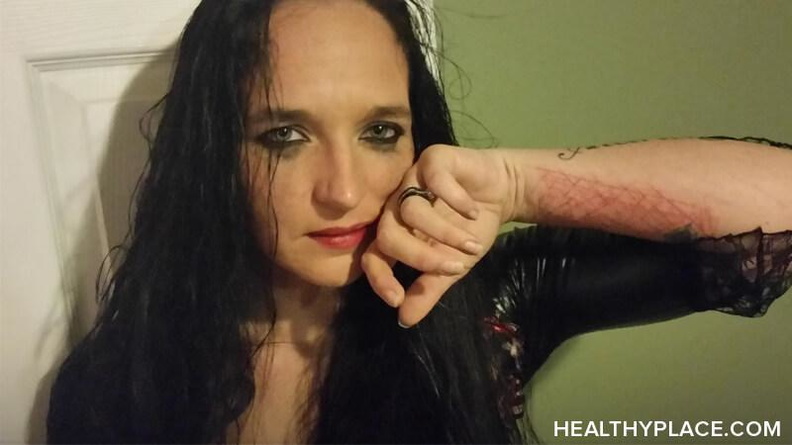 My name is Becky Oberg, and I have borderline personality disorder. I began self-injuring in college after witnessing an assault. I blamed myself for not being able to stop it—even though I’m a five-foot tall woman and would’ve been taking on two men, both of whom were about a foot taller. I began cutting out of guilt. I believed that if I hurt myself, I would learn to not fear pain, and if I did not fear pain, I could override it and take control of any situation--even one in which I could be seriously injured or killed.

But whether or not the diagnosis is accurate does not matter to some mental health professionals—the BPD diagnosis, sometimes referred to as “a psychiatric death sentence”, is often used to describe “difficult” patients. That makes it easier to write off cries for help as cries for attention, and to dismiss the patient with “You’re just a borderline.”

I began dialectical behavioral therapy (DBT) as part of my BPD treatment and found it didn’t help me at all. As a result, I was labeled “treatment-resistant”. With that label, I found myself among the uninsurable uninsured. As a result, I soon found it difficult to receive the treatment I needed. I wryly commented to my mother that I was no longer profitable.

As my condition worsened, I decided to move into the Indianapolis city limits, where I would be eligible for better treatment. But by this point in time I could no longer function. Some of it was my fault—my love of Stolichnaya vodka, for example—and some of it was beyond my control—stress from a stalker, stress from police who refused to enforce the protective order, stress from coverage gaps in Medicare Part D.

I finally suffered a total breakdown and asked to be placed in the inpatient unit for BPD at Larue D. Carter Memorial Hospital. However, this required a court commitment. I was placed on the wait list and sent to Richmond State Hospital in Richmond, Indiana.

During my time there, I began suffering flare-ups of previously diagnosed and documented medical conditions. Multiple requests for medical treatment were denied; they assumed I was faking. Curiously, so were multiple requests for mental health treatment—no group therapy, no individual counseling, no meetings with the treatment team, no notifications on when my medications were being changed. Staff was sometimes abusive—something still very difficult to talk about.

I quickly became suicidal and told multiple staff members. Other patients and my mother also told staff that it was serious, especially since someone I knew had just ended her life.

Staff ignored me until I made the attempt.

When I demanded an explanation, they refused to give one. After I went on a nonviolent “treatment strike” for four days (nonviolently refusing all treatment and becoming physically ill as a result), the psychiatrist agreed to meet with me.

“We had another borderline here, and every other word out of her mouth was ‘suicide’, so we figured you were the same way”, he explained. But I couldn’t trust his promise that it wouldn’t happen again—there were simply too many that he’d already broken. I was just a borderline.

I was wrong. The staff on this unit were trained specifically to deal with borderline personality disorder, which enabled them to eventually earn my trust. The psychiatrist and the unit director were often on the unit, and they took time to listen to patients and try to help them. Staff was held accountable, as were patients. For the first time since my borderline personality disorder diagnosis, I was more than “just a borderline”.

I spent nine months at Larue Carter, learning what my emotions were (how can DBT work when you can’t describe the emotions?), what situation had triggered them, what I was thinking as a result of the emotions, what I needed or wanted, how to analyze the facts of the situation and what mode of operation, or schema, I was in.

The BPD treatment program was so effective that within a year of being discharged, I was living alone in a cluster apartment and working as a freelance writer.

While at Richmond, I promised God that if he got me out of there alive, I would go back home to Indianapolis and educate people about what pitfalls to avoid. I consider this job the perfect opportunity to do just that.

APA Reference
Oberg, B. (2010, September 28). I May Have BPD, But I'm More Than Borderline, HealthyPlace. Retrieved on 2022, October 5 from https://www.healthyplace.com/blogs/borderline/2010/09/i-may-have-bpd-but-im-more-than-borderline

About Becky Oberg, Author of "More Than Borderline" Blog
Need for Borderline Personality Disorder Patient Advocates
SJ
May, 28 2014 at 8:17 am

I'm 33 and got diagnosed with BPD at 27, I've noticeably been unstable since my early teens; my life has been drama and storms and chaos after drama, storms and chaos, repeatedly! I was in full time therapy at 27 and now at 33 I am starting a full time therapy course again, it's two years long! Yes, I am very lucky to be in the UK and to have he NHS! In Feb earlier this year my boyfriend committed suicide after a year of hell with me and our crazy, intense relationship. I did try very hard in the relationship but it was so intense and stressful that it made me ill, I tried to split with him many times but we were besotted with each other... he finally took an OD after a week following two nights of domestic violence. He died, but right before that told his whole family, the whole town and friends that I was hitting him with a vodka bottle. I did, but only because he was biting and punching me all over, I panicked and tried to escape, anyway (the story could be ten pages long), four months later I am still traumatised, I have to handle being vilified by everyone as well as missing and grieving someone I thought was a soulmate. Ahh, so with all that, forgive my ramble! I am basically saying that, after a multitude of chaos, agony and trauma in my life, and a death (mostly due) to my BPD, I am now FINALLY going to change my life and my brain! I'm seriously going to, for all the pain and chaos HAS to stop! I've come so far, it would be a huge slap in the face to all the fantastic friends who have helped me so much to commit suicide... I'm not sure where I got my strength from, my rage? I need my rages to stop though... It's complicated and complex but us borderline's are so strong, empathetic too, we have incredible qualities (it's just they get hidden). I most definitely have to stay away from drink, drugs and relationships, as those three make me crazy, and those three are the only things that have brought me happiness, I now have to learn happiness and fulfilment WITHOUT those things, then I may eventually reach peace!
Strength to every borderline reading this, but y'know, what we really need is peace. Just stay strong and make the biggest effort to handle the disorder, it can be done, I'm sure it can!

A comment from the netherlands.
diagnose bpd has changed my life to the extreme.
a sister of me:once "if you are a bpd, then you are no longer my sister.
the stigma was born, and is until today
still alive.it is a high price to pay.
suïcide or try again.
with the special type of therapy you
mentioned.
thanks for the blog
joost- the netherlands

That's a great point about Aspergers.
I've long had the idea that I may have some Aspergers traits affecting my functioning (dbt treatment for bpd is not helping me, and I have a loonnnnnggg history of social impairment not accounted for by splitting, or even the boundary issues described in the interpersonal module). However, any assertion that I have social skills issues not accounted for by bpd or that I want AS testing is always dismissed without further questions by my psychiatrist. Any issues in initiating relationships are always dismissed as bpd-related. Every shrink I've seen expresses the opinion that "if you can make eye contact, you can't have Aspergers".
How the heck do I find someone knowledgable about adult Aspergers who would actually consider assessing me? How did you get your AS diagnosis? Did you get diagnosed as a child or as an adult?
I tried to email this autism information line with questions and got ignored :S
How do you get help as an adult female if you think you might have Aspergers?

Hey Becky! I was just doing some research and I saw this posting! I was with you at Larue until you left. If you dont remember me that is fine. I remember you letting me borrow the book you read. I would love to be able to get in contact with you to see how you are doing, but if not that is fine:)! Hope all is well and you continue to remain out of the hospital.

Thanks Becky! I have BPD too and bi-polar...oh and PTSD and wait...am an addict...multi exceptional? Sigh! ; ) It pains me to endure the grave-faced doctors give me their grim prognoses for my future! I believe I can stay well but not sure how? I have been sober almost two years and now that I no longer wish the dynamic duo of Handcuffs and Haldol managing my psychiatric affairs, I am seeking long-term preventative tx. That and my life and loves are going sorta mostly fine (and ever notice how the newspapers and relatives usually forget about the good stuff after a meltdown?). SNRIs look promising? What should I know about DBT? What else has worked for you? I may have a disease--but people--I am not sick.

I don't know. Sometimes it comes down to criteria set by the insurance companies. I remember insurance once refused to cover medical treatment for me becuase my injuries were self-inflicted. Sadly, that's a common problem.

All Females that are Diagnosed with B.P.D.
Should get a second opinion.
As Females ao the most Mis-Diagnosed as having B.P.D
When the Correct Diagnosis should be... Aspergers

Thank you for your comment.
I agree with you that it is possible for females to be misdiagnosed with BPD--I'm very critical of psychiatrists who make that diagnosis based solely on the presence of self-injurious behavior. That said, if the second opinion concurrs, people with BPD--male or female--should educate themselves about this disorder, treatment options and the effectiveness of different types of therapy.
Incidentally, I have Aspergers as well. I can see how that kind of mistake could be made.