I could feel the mania of my bipolar disorder begin, irritability bubbling up, about to explode, and I wanted to cry (Bipolar Mania And The Impact of Manic Symptoms). At 8:30 in the morning, my commuter parking deck on campus was already packed. Once stepping foot outside of the parking deck, the entire campus was crowded and packed with people and cars racing around the city.

I've been at this campus for ages, and this is only the third day of the fall semester. Of course it will be packed. It's time for incoming freshmen to get acclimated, explore, meet new people... Time for football (or basketball at VCU!), city festivals, and trying new restaurants... This should be exciting for me, but instead I feel the Bad Mania of my bipolar disorder coming on.

I've learned over time that I have two types of mania: Good Mania, where I'm more energetic and productive, talkative, and hopeful, and then Bad Mania, where I'm only overly irritable and explosive. These two rarely collide for me, and sometimes I experience Bad Mania more than anything else, such as on those days when I'm surrounded by rushing people and awful city traffic.

How do I know that it's more than just a bad mood or normal irritability? I just know. I know that my Bad Mania has arrived when I begin feeling as if everything is going much slower than I am. My mind is going a mile a minute while every one else is walking slower than I need them to. Computers aren't working quickly enough, traffic lights aren't changing in a timely fashion, others aren't talking quickly enough (The Relationship Between Bipolar And Anger / Aggression). 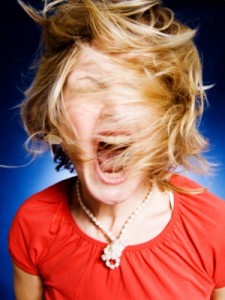 Sometimes I'm able to cope with this severe irritability, and other times, it feels as if it consumes everything -- every thought, every word that comes out of my mouth, every time I pick up my pen to write.

These things seem simple and obvious, but I have not been able to master them yet and it's much easier said than done. Do you have a Good Mania and Bad Mania? How do you cope, and what do you find that triggers you?

Back to School Bipolar Survival Guide
Don't Give In To Bipolar Symptoms: Life is Precious
Amanda Edwards
January, 25 2018 at 5:18 am

I stopped standing in queues way before I was diagnosed with bipolar. Lack of patience would be a mild way of explaining how I felt. I just felt like elbowing people out of the way. I wouldn't have cared what they thought and if someone had said any thing, I felt I would have yelled them down. I've experienced manic rage, which is way more than irritable and my Psychiatrist suggested I don't drive. As I haven't driven for five years, I decided to hand my licence in. So after 30 years I'm only a passenger. Safer this way. I enjoyed your article. Thanks.

I do have good mania and bad mania as well. The "I can do more kind",and the "I'm going to kick or punch the wall kind". I can be very impatient when driving. One day my son remarked "That was the scariest drive I've had." So I need to be aware of how I drive when irritable. Grocery shopping drives me crazy as well...too many people, people going too slow,people talking and causing blocked isles, long lines, etc. I've taken to going later in the day, and definitely not on weekends, or Mondays. I also carry little cash, my husband and I use our debit card pretty regularly. I have been good about not over spending since we tell each other what we have bought. It makes us accountable to each other and helps keep better track of what we spend. I also keep a weekly and monthly record of what we spend. My weakness is going out for meals, so keeping track of that puts a good reign on how often we go out to eat. I like the idea of taking time to breathe, also getting a good nights sleep seems to help as well. Have a good week and good luck in your classes.

Hi there! Thanks for commenting and sharing!
Oh yes, the driving and grocery shopping! It makes me anxious and irritated just thinking about it! Having someone to help you stay accountable is great, and I'm glad you have someone in your life for that!
Also, thank you, and I hope you have a good week as well!
-- Alexa