First of all, I want to welcome my co-blogger and fellow "accidental mental health advocate" Chrisa Hickey. As you may have noticed, it has been awhile since my last post. There have been many circumstances (travels and crises) contributing to my blog-silence, so I'm thrilled to be now sharing this platform with Chrisa. Welcome!

I'm happy to report some more progress for Ben. His life with schizophrenia is inching closer to "normal" - as long as he remains medically stable (yes, for us that means staying on his meds and avoiding alcoholic drinks). I strongly believe that with structure, purpose and community, improvement can build in schizophrenia recovery.

Sure, we have to adjust the timetable (no comparisons with other 31-year-olds please), but the "baseline" can move up.

Schizophrenia and Recovery: The Perils and Rewards of Risk

First of all, as I reported in an earlier post, Ben's social life has drastically improved. He has a few select friends now, people to "hang out" with - take a walk or bike ride, share a meal or play video games.

Secondly, he has a new job. Ben is currently working at a restaurant chain - as a waiter - and just last night received a 35% tip. This, I must admit, is beyond my most optimistic past expectations. It's early days, sure, but so far so good (my mantra, quite often) - and he absolutely loves this job. For a person with what I was told is "a very severe case of paranoid schizophrenia," working as a server in a busy family restaurant may seem impossible - but evidently it is not.

But, yes, occasionally worry creeps into my gratitude. Each of these things (friendship, a "normal" job) carries an element of risk.

Risk of heartbreak. Risk of failure. Of stress. And, yes - risk of relapse.

The Risks and Rewards of Friendship 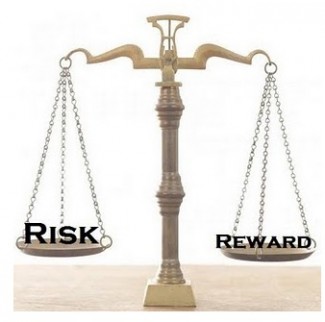 The friendship between Ben and the roommate we'd taken into our home for over a yearrecently ended abruptly, as "J" began a descent into drug and alcohol use, fairly well-hidden at first. It all erupted one evening last month when Ben discovered J had been stealing from him - cash, video games - to feed his addiction. What ensued, after Ben found out, was a scene that was all too reminiscent of the dark places Ben used to go to before treatment: confused, defensive, argumentative, unreasonable. Only this time it was J, and we (including Ben) were the witnesses. How strange to see Ben trying to "reason" with J - and I was reminded that you can't expect reason from someone in a severe mood swing.

We were ultimately frightened, and called for help. J's mother has supposedly taken him for psychiatric help. I hope so. Ben is heartbroken over what he sees as a betrayal - and what amounts to $1000 of lost cash and property - risk.

Still, until it took this awful turn, the friendship was a joy for Ben and for us. He learned that he can be a good friend and that he is worthy of good relationships - reward.

The Risks and Rewards of Work Stress

I'll be honest with you; I had hoped Ben's job would be less of a stress risk. But the restaurant saw potential as server, and the training began - out of my hands. Each day I hope it goes well as Ben works his way up to a full station. And so far, so good. He is rising to the occasion - reward.

But , does he now have too much cash in his pocket? What will he buy with it? Last night he treated himself to "a beer." He has never had a problem with alcohol, but one beer can wreak havoc with the meds' chemistry. Will he crack under the stress of a full load of customers - risk.

Ultimately, time will tell. We're keeping a watchful, hopeful, eye. For now, it's wonderful to see Ben so happy, so proud of himself. And the rest - well, it still boils down to knowing when to let go and reminding ourselves "whatever happens, we'll handle it somehow."

Meanwhile, we're going to stay grateful, and focus on the rewards - possibility, come true. There is hope and we can never let go of that.

Learning to Let Things Go When Parenting Mentally Ill Kids
When My Mentally Ill Child Forgets His Coping Skills
Karleen
May, 22 2014 at 2:44 pm

Randye I like what you are doing. It's my first time on your site. Thanks for sharing your journey with your son, and therefore causing others to share. It all helps so much. I'm on a similar journey with one of my sons. I was looking for advice/how to on conservator-ship and discovered you. I already completed NAMI FAMILY TO FAMILY. It was an emotional life saver as you hinted at. I just shed a tear reading about your apprehensions about Ben's new job..because I understand the stay stable, don't get too excited,live in the moment, be thankful for what is going right right now feeling. It's reminds me that this is a journey and it will take it's twist and turns but we can navigate it with knowledge. I am so happy that your son is proving in this moment no matter how long or short to himself what he is capable of. He will need such victories for his future conquests. Thanks again for sharing,it's inspiring. God Bless

Hi Kathleen and thanks so much for your kind and supportive words. Right back at you. !
Happy to say that as of right now : so far so good . Wishing you the best, randye

Randye ,
Thanks for sharing. Michelle

It's a fine line, isn't it? Always weighing the pros and cons and realizing so much of it is now out of our hands as they get older. I'm happy to hear about all the progress he has made and hope that he continues to experience happiness and stability. Prayers up for both of you. Lots of love.

I think that it is a miracle what Ben has achieved and we should all learn to never give up.
Best regards

thank you so much! Like any garden, it takes daily care -- but we are grateful for every seed that grows :)