Telling the truth is one component of integrity, but integrity has to do with being "whole" and "complete" in what we do, believe, and say. Our behaviors, thoughts, and words must align in order to have integrity. During the course of my abusive marriage, I discovered I'd lost my integrity and that I told a whole truck load of lies to boot.

I didn't like myself because I was not saying or doing what I believed to be right. Although I lied to protect myself from abuse, the abuse of my most valued characteristic, my integrity, hurt more deeply than my husband's put-downs and wrongful conclusions.In Part 1, I talked about why I began lying about my relationships with other people (mostly co-workers whose simple existence threatened my ex-husband's sense of control over me). Lying to protect myself in that situation led me to almost want to be isolated from the outside world. It was too much trouble to have working relationships or friendships; it seemed easier to filter my life through Will's than to have a life of my own.

However, Lying as an effect of abuse part 2 is about money and why I started lying about it in the first place:

Unlike many victims of domestic abuse, I largely controlled our finances. Well, I controlled them under his direction and intermittent supervision, but mostly he stayed out of it until there was a large purchase he wanted to make. (Hmmm...maybe I didn't control the finances! Was that an illusion, too?)

Our financial arrangement allowed him to deny knowing about credit card debt, the amount we paid out in bills, and the balance in our checking and savings accounts. When I attempted to give him financial updates, he acted like he trusted me completely, and didn't need to hear about it. However, "not knowing" and "trusting" me to handle our affairs left me wide open for attack when the balances weren't where he thought they should be.

I Lied About Money to Avoid Abuse

My lying came into play because I would charge groceries and household supplies to credit cards, telling myself we'd pay it off next month. Guess what? The payments caused us to be short on money we needed, and a vicious cycle ensued. I began charging items because he felt that because he "made good money" that we should be able to afford a certain lifestyle. It was painfully obvious to me that we couldn't afford the lifestyle he deserved, but I kept it to myself to avoid the argument.

Eventually I would face the music and, of course, the whole mess was entirely my fault. I'd lied to him, I'd bought "nickel and dime crap we don't need" and single-handedly brought us to the brink of financial destruction with my lies and sneaky behavior. (And the little voice in my head said he was right and I deserved the punishment he dished out...) 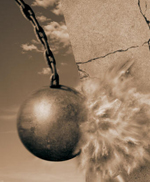 The End of the Lies

I made up my mind to stop lying to Will because sacrificing my integrity to avoid pain seemed to cause only more pain. If I wasn't avoiding exposing a lie, I was fighting to justify it. Both of those actions along with the lies ate away at my integrity and caused an inward collapse.

I stopped lying and soon realized it didn't affect my relationship now that I was telling the truth because my ex would abuse me when he felt the need, not because of what I did or didn't say.

When I began protecting a characteristic I valued, I created one good feeling in a sea of bad ones. Protecting my integrity was a strong step toward deciding my abusive marriage was not a building block to a healthy life - it was a demolition ball.

Hi Kelli,
I found myself in a similar position to your past experience. Though when i decided to tell the truth it just caused even more argument and verbal abuse, insult, personal attacks etc. I guess because I lied so I deserve it? And now he is accusing me of putting him down, doubting himself (because he used to be so suspicious at me, and now he has the truth to validate his suspicious mind, and it's a 'no wonder'). I just don't know what to say, he is making it out that I am the verbal abuser.. Anyway, we have broken up now though he still thinks he can continue abuse me, and demand to see me as he thinks I owe him (because I lied).

They will use ANYTHING to get you under control again. So what if you lied? Everyone lies sometimes. I'm guessing you lied to avoid abuse, but because you consider yourself a good person, you couldn't keep it inside. Good people protect themselves so they can put more good into the world. Do whatever you have to do to keep him away from you.
Do not answer his texts, emails, phone calls or the door if he knocks. If he comes over uninvited, tell him to leave through the closed door. If he doesn't leave, call the police. You could get a restraining order for any or all of those harassing things he's doing.
Don't believe for one minute that you owe him a damn thing. Visit http://thehotline.org and get some support. Please.

Ironically it was the truth telling that caused my abuse because simply put he didn't trust/believe anything I told him no matter how trivial it was but the fact was he was the one doing all the lying and being deceitful throughout our whole marriage. In the end I resorted to not telling him/ sometime lying in order to keep the peace. he was suspicious of me always so why bother giving him the truth/details of how I spent my day. He would use both the truth or the lie against me regardless. Lying gave him no ammunition except his words, the truth gave him something to manipulate against me. So Lies were the "better" option. The only thing I ever wanted was a 2-way Honest, Faithful and Open Communication marriage with an abuser you can never have that.

Hi Kelli
“When I began protecting a characteristic I valued, I created one good feeling in a sea of bad ones. Protecting my integrity was a strong step toward deciding my abusive marriage was not a building block to a healthy life - it was a demolition ball."
Identifying the fact I needed to protect my integrity above everything else has been the single biggest step in my recovery from my major depressive low point (s). After years of allowing my integrity to erode in personal and business relationships – I had nothing left in my soul to wake up for each day. My tremendous ability (sarcasm) to seek out relationships with narcissists and co dependents (vicious cycle) – led me to constantly compromise my integrity. I figured out that it wasn’t my integrity that was the issue. It was situations that I allowed myself (and major depression illness) to live in on a daily basis. Not protecting my integrity was making me sicker day by day. Until I was able to take ownership of this seemingly simple concept of protecting my integrity, I had no chance of getting out of my self imposed cycle of people choices. I had to become accountable and responsible for my core values. I’m proud to say with the help of my counselor and other trusted support; I am on the road to recovery.
(Natasha-great video, as I ejected myself out of a verbally abusive relationship within the last six weeks. The comments you stated on your video were ALL things lobbed at me on a daily basis. I went from recovery to wanting to check out again while in that verbally abusive situation. All I could think of was “how bad of a person, I was" and "how sick I was"---because that was clearly stated in each discussion and each email I received from my former girlfriend. My solutions?.......…protect my integrity and trust my intuition.)
Thank you both for your work that you share. I appreciate it.

Hi Kellie, Natasha here from Breaking Bipolar.
Thought I'd let you know I posted a video on an instance of verbal abuse and referenced your blog: http://www.healthyplace.com/blogs/breakingbipolar/2011/06/what-are-you-bipolar-mental-ill…
Seriously ticked me right the heck off.
- Natasha

Your own integrity is VERY meaningful especially when your spouse attacks it regularly. You start questioning everything you are and believe in. We go about trying not to upset our partners by sacrificing our own integrity, friendships, and security. We put our deepest feelings aside to satisfy this person who sees us as lesser and dominated.
I have lied to her about friends not really inviting me to their house because I did not want her to get upset and rage about someone inviting me. Then I ask myself, why did I do that, just be honest and keep your integrity intact. You know a relationship is not right when two people can not just talk and share with each other.
I agree with you Holly, Kellie is openeing my eyes so much with each article. She is showing me the life I am giving up to try and make somebody who can not be happy feel valued and loved. The thanks we get is criticism and put downs.

I just wanted to tell you how much I appreciate your articles, Kellie. I love your insight and the clarity with which you share it. I get something out of every one of your articles. I don't generally comment to that effect because it's hard to put into words. For instance, you mention protecting your integrity, a characteristic you value ... that's very meaningful to me but it's difficult to explain why.
Anyway. I just wanted to say thank you for taking the time to write.