Alcohol Bingeing in Elderly More Common Than Most Think

The baby boomer generation is known for being the 1960s “wild child” generation that redefined American culture with sex, drugs, and rock and roll. As 10,000 baby boomers are turning 65 each day, they are collectively changing the landscape of what it means to be a senior citizen. Baby boomers experimented more with alcohol than any other previous generation, and we can expect prevalence of binge drinking, at-risk drinking, problem-drinking and related alcohol problems to worsen.

Alcohol Bingeing in the Elderly 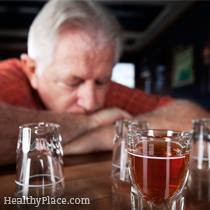 Unlike previous generations who grew up during prohibition laws, for baby boomers drinking was an acceptable part of culture and was encouraged. For boomers, drinking comes with quality of life, being social, easing stress, alcohol-related health benefits (i.e., red wine), but it also comes with potential age-related alcohol problems (i.e., health problems such as cognitive decline, liver damage, alcohol-related heart disease, interaction with medications, falling or car accidents). As the baby boomers are redefining what it means to grow old, will they curtail their drinking?

Will the Elderly Reduce Their Drinking?

It’s really doubtful. Without preventative services aimed at this specific group, we can expect the prevalence of binge drinking, at-risk drinking, problem-drinking and related alcohol problems to worsen, particularly for males as research suggests higher levels of heavy drinking. Considering the health benefits and also the serious consequences, what will you do for yourself, your parents, or even grandparents?

APA Reference
Author, G. (2014, May 7). Alcohol Bingeing in Elderly More Common Than Most Think, HealthyPlace. Retrieved on 2022, June 26 from https://www.healthyplace.com/blogs/yourmentalhealth/2014/05/alcohol-bingeing-elderly-common

PTSD is a Shared Experience in a Relationship
How to Help Special Needs Kids Be Mentally Strong
Mark Noo
May, 15 2014 at 11:59 am

An old girlfriend, from AA, told me her neighbors were an older married couple (baby boomers). The husband was a drunk and the wife complained. His response was to hit her.
It is amazing to me that people in their 60s would continue to drink to intoxication. It is amazing to me that a wife would still care enough to complain and that a husband would not have found a better response to those complaints.
I don't know why I wrote all this except that it is very hard to think of Grandma and Grandpa getting into a drunken brawl.
What in the heck is going on.

this article was thought provoking. it reminded me of my mother, unfortunately.