Is Coercive Control the Same as Verbal Abuse? 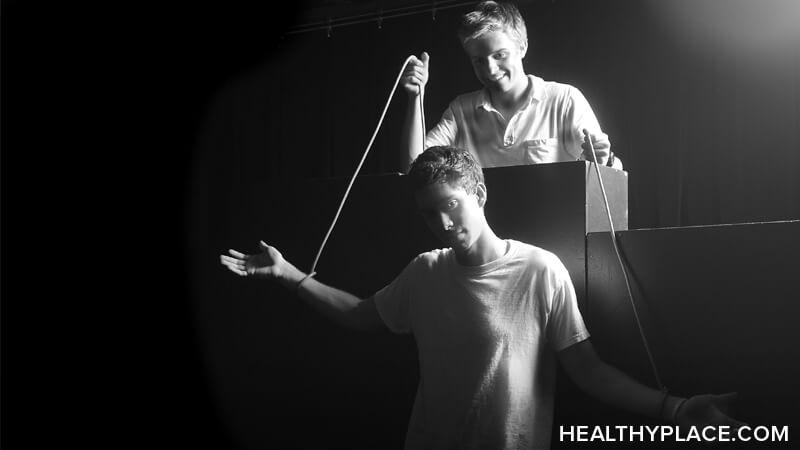 There is a growing awareness around coercive control, as well as umbrella terms like verbal and emotional abuse. This is partly thanks to the UK law that was passed in 2015 (carrying a prison sentence of up to five years for perpetrators), and also due to celebrities speaking out as part of the #metoo and #timesup movements. Although no such progress has been made in the US in terms of legislation, this is still a step in the right direction; it's the start of our cultures taking lesser-known forms of domestic violence more seriously and recognizing the devastating effects of verbal abuse (as well as other types of abuse). So what exactly is coercive control, and how does it differ from other forms of abuse in a relationship?

What Is Coercive Control?

Coercive control describes a pattern of behaviors that enable one person to maintain control over another. Confusingly, the UK government's definition includes physical violence, threats, and verbal abuse, which makes coercive control difficult to define in relation to other forms of abuse.

Each person's experience of coercive control is different, but the most common characteristics are:

What Is Verbal Abuse, and How Is It Different from Coercive Control?

Verbal abuse (also known as psychological abuse or emotional abuse) is an umbrella term used to describe non-violent abusive behavior, usually at the hands of a romantic partner or close relative. It covers insults, minimizing, gaslighting, and a multitude of other sins.

The problem with the term "verbal abuse" is that it sounds like a perpetrator's behavior is solely verbal, thus minimizing the pain and confusion it causes. It brings to mind the old "sticks and stones" adage: a children's rhyme that fails to recognize the after-effects of verbal abuse.

Is It Helpful to Draw Distinctions Between Coercive Control and Verbal Abuse?

Can distinguishing coercive control from verbal abuse help us create boundaries in our relationships or identify early warning signs of abuse? Yes, in theory, but it doesn't often work out this way. Most abusive relationships contain elements of coercive control, verbal abuse, emotional manipulation, and, eventually, physical violence. What's more, the situation between a victim and a perpetrator is so complex that neither can be relied upon to interpret the signs.

I've talked about this before, but in Look What You Made Me Do (a brilliant memoir that came out after the coercive control law had passed), Helen's partner Franc is portrayed as extremely controlling. Franc stalks Helen, checks her messages and emails, tells her which foods to eat, and even chooses her outfits. He also isolates her from her children, tries to control her finances, and threatens to kill her as a "joke" (When Verbal Abuse Is Disguised As a Joke). All of this occurs so gradually that Helen doesn't realize what's happening until she's well and truly under Franc's thumb.

The book is presented as a real-life study of coercive control and verbal abuse, yet there are points in the story where Franc slams Helen against a wall, pulls her hair, and locks her in a room for hours on end. If that's not physical violence, I don't know what it is. The man was dangerous, whether you label his actions domestic abuse, coercive control or anything else.

Let's just call coercive control what it is. It's abuse. Let's not draw distinctions between emotional and physical violence, because the lines are blurred at best. It's all abuse, it's all destructive, and in almost every situation the victim is at risk.

Abuse is abuse and it has to stop.

Look What You Made Me Do: A Memoir, Helen Warmsley-Johnson, Macmillan, 2018.

Abuse in Movies: How These 5 Protagonists Prevail
Trusting Again After Abuse in a Relationship
Amy
May, 14 2018 at 8:35 pm

Nancy, Your story is mine. No one believes me. I am the problem. Do they not remember us before? I lay here waiting for my own home to be foreclosed on because I don’t have any fight left. After 20 years together, this is my repayment. I spent Mother’s Day alone for the first time. My greatest loss is my only son. I won’t make it out alive because the pain is unbearable. Thank you for sharing.

We have to be strong, I have the "father" of my only child trying to destroy me emotionally and financially we not even married. I will get through this. i think the worst is financially, I am alone right now, but jobs are hard to find. I paid 300 dollars to have someone do my resume, and only got a job with the help of a friend.
Be strong, talk to your son, do whatever it takes to have a relationship with him, you are his mother, he needs to know you love him. Explain to him what you went through. but dont let your ex control your life, easier than done I know, but work on it every day.

Hello Nancy. I read the whole article and recognized myself in many places within it. I get it! The best thing to do is exactly what you're doing. Until we actually get out all of our story...there is no way we can fully function. This I believe. If you can find it...the most amazing way to pull yourself up is to join a Narative Therapy group., One where the group listens to your side of the story. You are acknowledge, believed 100% and therefore your emotions validated. God bless hyou...YOU ARE NOT ALONE. I heard and understood your story. Now that you are 'Free' make a pact with yourself to enjoy very waking moment of every day. God Bless from Cindy

Thanks for your comment, Cindy. Narrative Therapy sounds so helpful. Validation and being listened to are so important when it comes to overcoming abuse. Thanks for sharing your wisdom :)

Thank you so much for your comment, Nancy. You're absolutely right -- it is so helpful to talk about our experiences and help each other heal. I'm so glad you found the article helpful. Keep spreading the love!