A long time ago, I hooked up with another stellar soldier, Will, who quickly morphed into my abuser. When we met, the future I imagined for myself was divided. It was a toss-up between doing my time in the Army then going to college and embracing the military life I'd come to love and making it my career. I was undecided, and my imagination, fluid as it was, didn't include my future reality.

However, Will certainly fit the profile for my imagined boyfriend! He was an excellent soldier, strong, assertive - a great protector. He was my dream brought into reality. I felt blessed.

I listened to him. I adored him. He was my hero.

He proposed an alternate future to me, one of marriage and children in which I would stay home with the kids until later, when they were in school, and then begin my life of school and career.

I didn't like that. I bargained for time, saying it was my duty to finish my four year enlistment. He reluctantly agreed vocally but not in actions. We married, and Will began to manipulate my future into one of his own choosing.

Slowly I felt him overcome my imagination and possibility. My recent visions diminished to almost nothing. 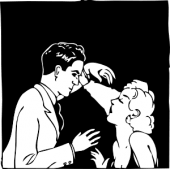 How did he brainwash me? The brainwashing process was quick and unnoticeable, really. He began gently, telling me his mother was his idol. Stay at home mothers had the hardest job in the world and his mother knew how to raise children, keep a neat house, and have dinner on the table in time for dad's homecoming each day. He respected mothers.

Then, as I began describing how my life would differ from his mother's shining example, he added a negative thought to the positive idea of motherhood. Suddenly, he believed that all military women were whores (except me). But soon his words and feelings took on an ominous tone and he began lumping me in with the whores he worked with. In a mighty fit of temper, I became a whore, just like all the rest. I fought this label tooth and nail and in so doing, raised his ire further and became worthless and irrational and worse.

No, he never out-right said I should get out of the military, but that is what he wanted.

Add In A Healthy Dose of Fear...

I feared his temper. I feared conversations with him because the most innocent ones tended to end with him angry at me, seemingly beyond repair. "He married me to fight me," I wrote in my journal, and I was right.

He was fighting me for power over my thoughts and actions. He used verbal abuse and brainwashing to force me to become his dream woman, and he used every bit of ammunition he had. He attacked my weak spots, manipulating all the problems in our marriage to fit neatly into my shortcomings. He made sense - this man I'd adored seemed to know me so well, seemed to know what would be best for me.

Believing His Ideas Over Mine

His implanted notion that I was worthless without him permeated my once strong self-concept. Because I came to believe early on that he was my hero, my salvation, I ignored my fears. Instead, I told myself a different story in order to imagine a less fearful reality. In hindsight, I see it. At the time, I thought I was choosing my destiny.

I told myself that I chose to marry him, wanted him to be happy, and needed to be a person he could respect. To do that, I knew I must seal off all of my possible futures - except for his. I left the military honorably due to a purposeful pregnancy, and exiled myself to his imagined future for me.

Why am I relating this story at a time of year when we're so optimistic about our resolutions for the New Year? I tell you my story to serve as a warning: reality and imagination are not opposites. Reality is a product of our imagination. Reality is what you've imagined it to be. Imagination and the resulting reality crumble under the weight of fear.

Fear is due to one of these things:

As you work through your resolutions this year, be ready to face fear. When it rears its ugly head, ask it where it comes from. If fear is present due to an event, you won't ask the question until you're two blocks from your starting point. If your fear is a reaction to change, you can remind yourself of the positive outcome expected from the change and work through it.

If your fear comes from the implantation of ideas by another person, you must immediately throw off that fear. It feels real, but it is not real to you. It is an emotion forced into your mind by a person who fears the outcome for themselves if you veer off their course and actually behave in a way that would bring you peace and fulfillment.

This year, give yourself the ability to succeed knowing your imagination is your only limitation! Dealing with our own fear is tough enough. Do you really want to deal with the fears of a controller, too? I gave up almost two decades of my life to fears artificially implanted in my soul. My marriage to Will was fruitless (save for our two boys of course!). I could have avoided that grand wasteland if I hadn't allowed his fears to overcome me.

Hold fast to your imagination, your idea of greatness. See it, hear it, taste it no matter what fear tells you. Let your imagination show you what it feels like to meet your resolutions and succeed in your goals. Remember that what you imagine today becomes your reality.