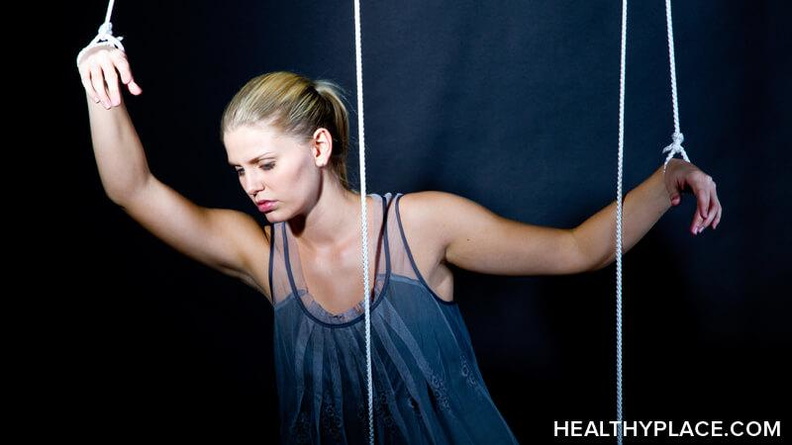 You're on a first date - attractive person, nice restaurant, good conversation, and after dessert, you excuse yourself to use the restroom. When you return to the table, your date is visibly upset. He stands up, waving wildly for the ticket, grabs your hand and storms both of you out the door.

You're wondering what horrible thing happened during your absence, so you willingly follow. Once in the parking lot, your date puts his hand around your throat, pushes you against the car, and whispers into your ear, "I was talking to you. No one gets up and leaves while I'm talking!"

What do you do? Call for help as soon as you're free? Run for the hills? Fight for your life? Probably. No one stays with a person who acts like that! Unless . . .

No one stays with a person who physically assaults them unless they're involved in a relationship with a history of verbal, mental and/or emotional abuse. Likewise, physical violence is never the first sign of abuse in a relationship. It can appear to be that way to the uneducated partner or those already so far down on themselves that their abuser's hurtful words seemed normal or true from the beginning. But I've met nobody who created a relationship with a person who physically assaulted them on the first date (or second or even the third).

That doesn't happen. It's the effect of verbal and emotional abuse that keeps a victim in the relationship; it's the lack of appropriate fear, the empathy for the abuser, and the belief in unconditional love.

You must know that fear does not imprint on an abused person's psyche from the beginning of the relationship. Instead, fear comes on slowly, in tiny incidents that anyone would ignore as a bad day or maybe dismiss as intoxication. As such, the abuser slowly conditions the victim to ignore fear. The abuse escalates, but as it escalates the abuser coerces the victim to stay; the victim becomes desensitized to the most horrid of outbursts -- not emotionally desensitized, but less afraid than a stranger witnessing the abuse would be.

The victim may claim to be unafraid of the abuser despite horrific evidence to the contrary. You must know that "love conquers all" - even the voice of reason - and victims in the most fearful of circumstances may not recognize themselves as abused.

If you tell a person who received a black eye at the hand of their lover that they are abused, you could very well find yourself staring into the face of a dumbfounded individual who doesn't know whether to be angry or just plain disgusted with you. Even a heart to heart with your daughter about your concerns that her partner mentally or emotionally abuses her can turn ugly in a heartbeat.

One reason why this happens is because abuse victims believe their partner loves them. They may also believe that their partner acts certain ways because the victim does and says things that make their partner upset. Victims deeply sympathize with their abuser's feelings to the point that they deny their own. They feel so deeply connected to their partner because being separate from them (being unlike the abuser) causes so much pain in the relationship, to the abuser and to the victim, that the victim has learned to avoid separation (pain and fear) at any cost. The avoidance of pain becomes the same as keeping the peace.

If the victim separates themselves enough to feel their own pain, the abuser recognizes the separateness and ups the control level (sometimes to physical violence) to get their victim back under their thumb. Remember, an abuser's primary motive is to create mini-me's . . . to imprint an exact likeness of themselves onto their victim's psyche so the abuser can be certain that life goes according to his or her own selfish plans and desires. The abuser expects the victim (or the entire family) to get on board and be exactly like him or her so, in the abuser's absence, his or her life retains predictability. Unpredictable equals uncontrollable. Abusers seek control.

The Twisted Words and Actions of Domestic Abuse

In the beginning, abuser's use their words to gain control over their victims. Sweet words designed to fool the victim into investing a piece of themselves in the relationship give way to insidious undercuts to the victim's self-esteem. The abuser's seeming vulnerability becomes the excuse for their poor behavior as victims sink deeper into the relationship, telling themselves their lover acts that way due to their fears and past hurt.

The excuses become a way of life because it is illogical that someone who loves us so deeply could possibly say those hurtful words on purpose.

This starts small, the making of excuses, until finally, on the day the abuser issues an uppercut to the chin, the victim excuses the behavior out of love and sympathy for the abuser's pain. The victim wears the bruises because they are manifestations of their lover's pain, and, at that point, an abuse victim must believe the abuser loves them because to believe otherwise results in more inner pain. Separation from the abuser who is now enmeshed in the victim's very soul.

It's the inner pain that kills a soul; it's easier to overlook bruises and breaks than to unravel the twisted thinking domestic abuse creates.

Suggestions To Leave Abuse?
Abused Emotions – Feel The Negativity
Nadine
February, 26 2022 at 10:55 am

As difficult as it is to break this toxic cycle, once I finally managed to leave I never looked back. As I slowly came back to my senses I couldn't believe how I had ever tolerated and justified such horrendous mistreatment from this vile sadistic creature. Their sickness blurred my senses like some poison a snake injects into its prey.

It's amazing what you can get used to. My husband would say and do the most hurtful things and expect no reaction or even a positive reaction to what he had just done.
And if you didn't say or do the right thing you knew it was going to get worse. He was going to blow up or become violent in some way.That's when reality becomes more twisted then objective. But living that way for so long reality really changes and the only thing you can do is try to hold on.