Will would often tell me that I would never find another man like him. I did not stop to consider if I would want to find another guy like him because deep down, the answer was "No, I never want to know someone like you ever again."

Instead of answering the real question, I chose to listen to him tell me why he was so great. Honestly, I agreed because when it came to work, Will was great. Will works diligently, and held two jobs in the early years. I did not worry about income. I was able to stay at home with the boys without once being asked to take a job. He willingly put up with work he hated to provide for his family.

Will wanted to be married, wanted children, wanted a family. He wanted to keep us neat and tight like collectible robots on a shelf. 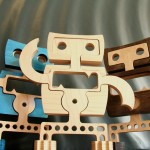 He was able to forget about us so long as we performed the way he wanted. But when we acted on our own accord and embarrassed him, he couldn't take it. We embarrassed Will anytime we did something he would not have done.

Abusers Unleash Anger When No One But Family Will Know

One time, our family went to his friend's house for dinner. Marc, my oldest son, was about 7 and loved all kinds of food. Will loved how Marc would eat anything and often bragged that his son was not a spoiled little brat when it came to food. That night at dinner, Marc predictably cleaned his plate and asked for seconds.

Right after hearing, "I don't like that," Will's face turned beet red. He made a joke and didn't say much to Marc at that time. Will waited until we were driving home and then bombarded Marc with hostility. Will told Marc that he was a selfish, spoiled boy who didn't think twice about embarrassing his father "in front of another man".

From what I saw, neither our hostess nor Will's friend skipped a beat when Marc offered his opinion. It hadn't mattered to them at all. Yet Will was completely shamed by what his seven-year-old said. And I, if I'd been a good mother, would have "done something about it" when Marc was younger so Will wouldn't have to wonder if his kids knew how to behave.

Abusers Think You Are Broken

Will said he wished he could open my brain, see how it worked, and fix it. As if I needed fixing. I wasn't broken, but I also wasn't him. I didn't think like him, nor feel like him, nor act like him. Therefore, I was wrong and if he could have done it, he would have repaired my inner machinery to his specifications.

If he'd gotten his wish, then he would have a good wife and fine sons. He would possess his wind-up and go family, and it wouldn't bother him that we were merely robots. He knows he can fix a robot.

I'm having therapy it will help you to heal properly so I'd consider it. Teaches you to stop looking at the past and keep moving forward when ever I have flashbacks I remind myself I'm in the present now an that's the past , the best thing to do is hope and make sure you have a better future I'm doing this by keeping away from men for the time being. There's no chance of me going through that abuse again, aslong as u remain single. I got my baggage still but I'm working on it, depression anxiety tension pains , but I will get there. That ex is nothing to do with me anymore all he is a massive mistake :)

Negative is negative.
You will pay the price unless both partners stop fighting.
Start over by being good friends and communicate.
If you can't, split up. Take a break. All is not fair in love and war.
Stay focused.
MS

marzipan souffle...Unfortunately, abusers do not want to be "good friends and communicate". Your suggestion works in a functional relationship, not a dysfunctional relationship built within the confines of the cycle of abuse.
What good does it do for one person to be willing to communicate? What good occurs when only one person wants to stop fighting? What good is the relationship when only one partner seeks to compromise?
Abusive relationships are very different from healthy ones. "Fair" is a concept healthy relationships employ. Many abuse victims continue negotiating for "fair" when the abusive partner wants only to "win".

I dealt with a marrage for 23 yrs living this way as a "robot family". I'm shocked that I even came across this blog stating this. I waited until my children were almost out of high school and finally had the courage to end the nightmare. I'm very happy now with my life...I feel like I'm normal again.

Your blogs feel as though you are writing my experience! I often used the words "mannequin" and "thing" to describe myself, as it didn't seem like my husband was interested in me as a human being. I was more like a circus animal who should perform on cue.
Thank you for all your writing. You make me feel not so alone in these thoughts.

Sorry, it was Ten days ago when I said that I thought he should leave which was the day after he told me he was done and moving out.

Interesting...today, I found out that "I am crazy" and "have a twisted way of thinking"...If I would just "shut my hole and listen" and lets not forget do everything "HIS" way things would be perfect. I'm not allowed to have an opinion, not allowed to cry or express my feelings...because they are wrong.
I guess my man wants a robot or a toy of some sort that he can put on a shelf and use at his convenience.
We're breaking up, I think. I say this because 11 days ago, he was leaving. Twelve days ago, I said I think you should leave, only then for him telling everyone I'm kicking him out. He's still here, won't leave, every excuse in the book, however still verbally, mentally and emotionally abusing me. I don't want to get nasty, its not my way.
What is he trying to make me do? Become the robot, have another nervous breakdown, bring in the police? "It ain't over till its over", but will it ever be over?
What have I done to make it go so wrong?

He's trying to make you be HIM. It feels like he wants a robot because what he wants is not you but instead an extension of himself. He wants you to do, think, feel and be just as he does, thinks, feels and is because ONLY in that way can he be sure he is safely in control of himself and his world.
It doesn't matter what he is trying to "make" you do because you are in control of what you do.
You have done nothing to "make" it go wrong.
Are you breaking up? If so, let him go. Even if he won't leave the house yet, let him go.