Should Marijuana Be Used to Treat Combat PTSD?

There are many reports of veterans using marijuana to deal with the effects of combat-related and other types of posttraumatic stress disorder (PTSD). Users claim that marijuana helps with anxiety and sleep, among other things. But is this true? And is marijuana use risk-free as some seem to think it is? Should marijuana be used to treat combat PTSD?

What Trials Have Been Done on Marijuana and PTSD?

There have been no randomized control trials of the treatment of PTSD with pot. This means that we only have anecdotes and associations (not causations) to go on, and while some anecdotes and observational studies suggest that there is promise for using marijuana to treat PTSD, other studies have found no benefit and still other trials have found risks and downsides associated with pot use in those with PTSD.

It is because of this conflicting and inadequate data, that most states do not allow the treatment of PTSD with marijuana.

What Are the Risks of Using Marijuana If You Have PTSD? 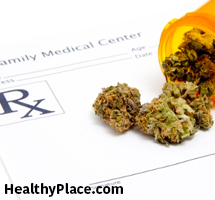 Because of the lack of quality studies, it is hard to pinpoint the risks; however, it is pretty clear that if you have PTSD and you use marijuana, you increase your risk of having a cannabis use disorder wherein cannabis use interferes with, and harms, your life. Cannabis use disorders are associated with poorer PTSD outcomes. It also appears that those with PTSD experience greater cravings and withdrawal immediately after they stop using pot.

Perhaps most alarming, though, is one study’s findings that marijuana actually worsens PTSD symptoms. In a 2015 study by Wilkinson, Stefanovics, and Rosenheck, they found that, when compared to patients with PTSD who had never used pot or who had stopped using pot, marijuana use was significantly associated with:

In short, if you think that smoking marijuana is helping your PTSD, it may actually be doing just the opposite.

Limitations to the PTSD and Marijuana Data

As I said, no randomized controlled trials on the use of marijuana in PTSD treatment have been done so this data has to be considered carefully and as a starting point only.

That said, it’s important to realize that marijuana is a drug and like all drugs, it comes with risks and it doesn’t work for everyone. Due to the lack of evidence, I think it’s reasonable not to allow pot as a medical treatment for PTSD but this may change in the future as more evidence is emerges.

I realize this is from 2015, so I am taking it with a grain of salt. There are hundreds of strains of marijuana, and they have differing uses and effects. There are indeed strains that make PTSD symptoms worse, and there are strains that make them better. Strains that work for pain might do nothing for PTSD and vice versa. I highly doubt there is any company who would fund the exhaustive research necessary to truly do a scientific study, given the quantity of marijuana strains.
The medical community has next to no knowledge on this topic. The best knowledge comes from a dispensary owner with years of experience working with a variety of patients and strains.