On Understanding Combat PTSD I focus on the issues surrounding combat posttraumatic stress disorder (PTSD), often from a medical perspective. However, there are many people that have views on combat PTSD outside of doctors. Of course, veterans are one of these groups and some veterans (and others) might argue that PTSD is not, in fact, a disorder. Why would people think that?

Posttraumatic stress disorder was included as a mental disorder in the Diagnostic Manual for Mental Disorders (DSM) version III, released in 1980. Prior to that, prolonged trauma exposure symptoms were considered quite abnormal and known as “traumatic neurosis.” Traumatic neurosis was explained by hereditary predisposition, early maladaptive experiences or a pre-existing psychiatric condition. It was considered an underlying condition just waiting to present itself.

Once PTSD was recognized, however, there was a shift from thinking about people who experience a trauma response as “abnormal” to thinking about people’s responses to trauma as individual. According to a paper entitled A Paradigm Shift in the Conceptualization of Psychological Trauma in the 20th Century:

From being the responsibility of the subject, traumatic illness became an external imposition and possibly a universal response to a terrifying and unexpected event. This shift from predisposition to the characteristics of the event itself reduced guilt and blame, while . . . [making] it easier to award financial compensation.

PTSD as A Disorder 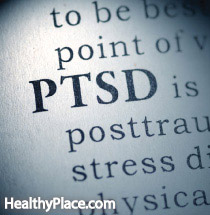 Putting PTSD in the DSM, however, does classify it as a mental illness alongside other disorders such as bipolar or anxiety disorders. On the one hand, this makes sense. PTSD is a diagnosable condition that affects a minority of people who experience trauma. It has certain symptoms that are similar across sufferers and its symptoms, by definition, negatively impact the sufferer’s life.

On the other hand, some would argue that these symptoms are more of a posttraumatic stress reaction and are normal and reasonable given the exposure to trauma. Some people in this camp want the word “disorder” removed from the definition and don’t want it seen as a mental illness.

The Benefits of PTSD as A Mental Illness (Disorder)

I do think this perspective is understandable and a serious reaction to stress is something that could happen to anyone. However, we do understand that not everyone experiences PTSD, even after significant exposure to trauma, and we understand that PTSD is at least partially genetic – suggesting that, on some level, it is an abnormal state.

And seeing PTSD as a mental illness has the benefit of making it a medical issue, which it is, it allows doctors to treat it medically and forces insurance companies to pay for its treatment and impacts. It also allows people who suffer grave PTSD to claim disability status and get the benefits afforded to those in that situation. Additionally, viewing PTSD as medical issue takes the pressure off the individual as somehow having succumbed to “weakness” when we know that medical issues are nothing of the sort. PTSD as an illness does not denote weakness any more than cancer does.

All that being said it can be beneficial for PTSD sufferers, caretakers and medical professionals to at least consider the view of this disorder as a reasonable reaction to trauma as well as an illness. It may put PTSD in perspective for those failing to understand what victims of trauma go through and how such severe reactions (symptoms) can arise.

This is a really important discussion. Emphasizing stress reactions occur on a continuum from acute sporadic instances to chronic trauma is very important as well as recognizing we can have healthy, functional reactions to the stress and unhealthy, dysfunctional reactions. Therefore, starting with PTS as an event is a good start. When symptoms occur and persist it is PTSSyndrome. If those symptoms cause disruption of activities of daily living (ADLs) and dysfunction, it has become a PTSDisorder. Labeling of sign and symptoms as normal reactions as PTSS makes sense, and PTSD when the situation becomes a medical disorder. This discussion should have nothing to do with whether the insurance industry pays for our care. Whether a medical provider helps a client stay healthy or treats a medical disorder labeled with the DSM should not determine whether they are reimbursed. Perhaps labeling what we are observing has become too political?