As I’ve mentioned previously, medication and psychotherapy (such as prolonged exposure therapy) both have a place in the treatment of combat posttraumatic stress disorder (PTSD). However, there are additional therapies that can help veterans. One such type of therapy is mindfulness-based. You might have heard of this as mindfulness meditation and you might have thought that meditation wasn’t right for you, but mindfulness is much more than that and a 2013 study shows that veterans found mindfulness-based therapy was accepted by, and effective for, veterans with combat PTSD (more below).

An easy way of thinking about mindfulness is fully living in the moment. Mindfulness can be as simple as noticing what is going on around you in the here and now and accepting your thoughts and feelings without judging them. For example, when many of us brush our teeth, we completely “zone out” and don’t think about what we’re doing – it’s habit. But if you were practicing mindfulness, you would focus on the action of brushing, how the brush felt, how the toothpaste tasted and so on. You would focus your mind on the present moment. You would notice the thoughts and feelings that arise while you’re brushing your teeth and not judge them. For example, you might remember something disturbing from the past. That’s okay. You would simply allow that thought and the associated feelings to occur and then try to let them go while refocusing on the here and now.

One common technique for practicing mindfulness is to focus on the inhaling and exhaling of your breath. This can bring you back to the present moment and take you out of dwelling on the past or worrying about the future.

Mindfulness is something that can be practiced every day at any time and it gets easier the more often you do it.

How Can Mindfulness Help Combat PTSD? 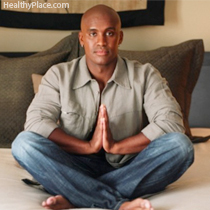 Mindfulness-based therapies have been shown to help in stress reduction, in general, so it stands to reason that this would help someone suffering from combat PTSD. But, specifically, mindfulness allows someone to more easily deal with the powerful emotions associated with combat PTSD. For example, you might experience fear and anxiety associated with a painful memory. With mindfulness, you would refocus your mind onto the present moment and allow the fear and anxiety to run their natural courses and then be let go. This awareness of the present moment coupled with the ability to experience strong feelings without judging or acting on them helps people change the way they react to powerful emotions and traumatic memories. Over time, these thoughts, feelings and memories become easier to process and less powerful. This is an important step in the recovery of combat PTSD.

What Does the Research Say about Combat PTSD and Mindfulness?

We don’t have a whole lot of research on mindfulness and combat PTSD specifically, but one pilot study last year showed that short-term (eight weeks) group mindfulness-based therapy improved:

These are major gains when you’re talking about combat PTSD. And, of course, mindfulness has one great advantage over medication – no side effects.

If you’re looking to learn more about mindfulness in the treatment of combat PTSD, see this article from the Veteran’s Administration. If you’d like to try mindfulness-based therapy, you may be able to find a group locally that offers that therapy, although it may not be for trauma survivors, specifically. Look for programs such as:

Suicides Rates Among Veterans Alarming – What Can We Do?
What Happens in the Brain When You Suffer From PTSD?