How Acceptance of Mental Illness Can Help You Manage Stigma

Saying mental illness and acceptance in the same breath might seem like an awful idea at first, but accepting your mental health condition can actually be a key player in removing, or at the very least alleviating, the stigma you face (Why It’s Hard to Accept a Diagnosis of a Mental Disorder). Personally speaking, accepting my mental illnesses for what they are helped both the self-stigma and external stigma I felt.

What Is Acceptance of Mental Illness?

Acceptance can mean a lot of things, but for me, I like to refer to a quotation from Michael J. Fox. In his case, I imagine he’s talking about his battle with Parkinson’s disease, but I think it fits nicely across the board.

Acceptance doesn’t mean resignation. It means understanding that something is what it is and there’s got to be a way through it.

How Can Acceptance of Your Mental Illness Alleviate Self-Stigma? 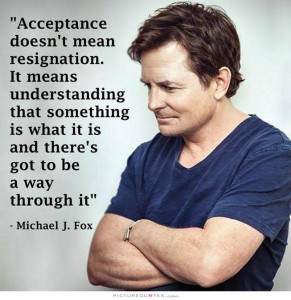 Speaking from personal experience, acceptance helped take away a lot of my self-stigma. Dealing with my skin-picking disorder is a prime example of this.

Over time, I started to accept the skin picking is a disorder and I began to acknowledge it for what it is, not what I wanted it to be or not be. I accepted that sometimes it would royally suck and be difficult to control, but with that acceptance, I realized I didn’t have to blame myself (Managing Self-Sabotaging Behaviors Part 1: Acceptance). I wasn’t weak or a failure; I was just struggling, and while it’s less than fun, it’s okay.

Mental illness acceptance alleviating external stigma is a little trickier, but understanding that the skin picking is a disorder and not my fault helped take some of the pressure of others' words off of me (Mental Health Stigma and the Misuse of Words). Because I had my own understanding of what the disorder is, I was able to recognize that the stigmatizing things people said weren’t a reflection of reality, but rather a reflection of their lack of information (Where is Mental Illness Education?).

Sure, the things people say sometimes still sting, but they roll off me more easily because I don’t take them on as personal truths anymore.