Does Stigma Make You Lie About Your Mental Illness?

The stigma surrounding mental illness can be debilitating; it can even cause you to deny symptoms you need to share with your psychiatrist and treatment team (How to Talk to a Doctor About Your Mental Illness). The fact is, until you can open up to your doctor and others who are there to help you and be honest, it will be very difficult--if not impossible--for you to get the help you need.

Despite the fact that psychiatrists and nurses have seen numerous different cases of people with mental illnesses, each patient is unique and needs treatment for his or her particular type of illness. Many patients find themselves put in a hospital or psychiatric ward against their will and are concerned that if they talk openly about their voices, their delusional thinking or hallucinations that they will be kept in a hospital or psychiatric ward longer, but nothing could be further from the truth.

Your psychiatrist is someone who needs to understand what is going on with you in order to treat your condition properly. If you feel you don't trust your doctor, it may be time to consider finding another one, which may be next to impossible in a hospital setting. The most important thing you can do is to talk to your doctor and tell them all about yourself, 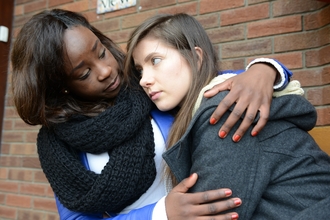 your moods and the things that may be happening that you don't understand (Psychosis Symptoms: What are Hallucinations and Delusions?). Ninety-nine percent of psychiatrists will want to hear this and will be able to help you much more when you are honest. There are many treatments for people with delusions or voices or other forms of psychosis and speaking to a trained mental health professional is your best first step in finding a way to deal with them and live free of your symptoms.

Lying About Mental Illness Because of Stigma Doesn't Work

When I was 18, I was very ill and had to be taken to the psychiatric hospital with a number of symptoms of psychosis that were very apparent. My delusions were swimming around in my head, they were severe enough to make me think things like I was from a wealthy family and that I was as famous and well-loved as a rock star. Fortunately, I had doctors who were smart enough to realize what was going on with me and they were able to give me psychiatric medications that helped.

The problem was that I thought I needed to keep all of my delusional thoughts to myself and that all I needed was more discipline and structure in my life. As a result, I tried to join the military which was a huge mistake at the time. Luckily, I was turned down and the fact was that I should have been honest with the psychiatrist I was seeing in order to get better. No amount of discipline would make me well.

Another time when I was very ill, I wanted help but didn't know where to get it. I ended up phoning the police and telling them I thought someone had put hallucinogenic drugs in my food. I was so ashamed of my illness because of the stigma surrounding it. Luckily the police officer that responded took me to the hospital and got me the help I needed.

APA Reference
Gregersen, L. (2016, December 18). Does Stigma Make You Lie About Your Mental Illness?, HealthyPlace. Retrieved on 2023, February 3 from https://www.healthyplace.com/blogs/survivingmentalhealthstigma/2016/12/dont-let-stigma-make-you-dishonest-about-your-illness