In order to combat something, one first must learn everything one can know about the subject at hand. Meaning, if we are to fight stigma, we need to know why it exists, what motivates its spread and what purpose it serves for those who endorse it. 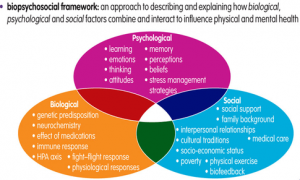 Those poor people, locked away in asylums were all painted with the same brush whether they were depressed, anxious or suffering from delusions. Stigma thrived as society hid the mentally ill in beaten-down old hospitals and society felt safe from the dangerous lunatics.

Around the 1950’s, medications became available that helped off-set some of the symptoms of mental illness. It was around this time that mental illness began being spoken of as a brain disease, under the belief that it would help reduce stigma.

‘It was thought a biological understanding would reduce stigma, since it’s not fair to blame someone for a diagnosis of a disease that’s beyond their control. Despite good intentions, evidence actually shows that anti-stigma campaigns emphasizing the biological nature of mental illness have not been effective, and have often made the problem worse.’ (Angermeyer, M. & Matschinger, H. (2005)

What’s So Different About Mental Illness?

It’s interesting to note that while the public may assign less blame to individuals for their biologically-determined mental illness, the very idea that their actions may be beyond their conscious control can create fear of their unpredictability and thus the perception that those with mental illnesses are dangerous. (Angermeyer, M. & Matschinger, H. (2005)

A 2008 survey by the Canadian Medical Association found these shocking and disheartening statistics:

After the anger from the above statistics abates, there is actually a powerful message in those dismal numbers: we need to step up our game and bring anti-stigma campaigns to a whole new level. The ‘Us and Them’ attitude that exists in society needs to be expunged. When mental illness is viewed solely as a brain disease, it creates a unique difference between the sane and the insane. It also serves to not only stigmatize the individual, but also their entire family.

So, what’s the answer then? People who work in the field of mental health stigma need to all be on the same page and endorse the well-researched and fundamentally sound concept of mental illness as a bio-psycho-social condition.

This model eliminates the simplistic notion of mental illness as purely a brain disease and instead offers up empirical evidence that it results from a complex interplay between biological, psychological and social factors. This model takes into account matters such as trauma, sexual abuse, substance abuse, poverty, unemployment and its treatment involves exploring each of the three distinct factors and how they relate to one another.

And we don’t do ourselves any favours by dumbing it down to a purely biological condition beyond our control.

Mental health stigma as deep wound of current mental health care system indicates serious and impassable ditch on appropriate treatment of mental disorders. So, it ought to overcome this primitive social attitude toward mental disorders, as fundamental threatening of global welfare. In this direction expert of mental pathology among others should re-framing the real nature of human personality, as interplay of bio-psycho-social attributes. Indeed, we are victims of ours innate instincts, which ones operates outside our conscience. They are improper, unhardened and unmerciful, which ones attack and endanger the integrity of our personality. The result of this counteracting is our mental statement, with numerous emotional perturbations both: in mentally health and mentally ill persons. If dominate instinctive urges, the respective person would be mentally ill one. This wriggle between unconscience and conscience is permanent and is subdue to many bio-psycho-social factors. By me, the substantial explanation and understanding of this wrestle inside our personality exhibits modest contribute to fight stigma of mental health.

good food to digest. thanks

All 1st responders need to be on the same page as well to end the stigma as many are annoyed it seems responding repeatedly to an individual who attempts suicide & why not let them die if that's what they want so bad. That statement came from a young woman I met who while in the ambulance from a suicide attempt a 1st responder made that comment thinking she was asleep. This is not at all how a lot of 1st responders feel but they really need to be on board to understand,fight stigma & help save lives of those with mental illness.

I am a consumer of mental challenges and I have been for most of my life. What I think is the ways of getting the people that are not informed about the prejudice are people that haven't been exposed to people that are affected by a mental illness. What needs to be done is to interest the general population in reading or talking or even have a prejudice opinion of a a person that has a mental illness, to become interested in reading or knowing someone that has a mental illness. Even family members or just people in common that would like to know or could be presuaded to find the truth about consumers of mental illness. I think the biggest obstacle is that when people hear that someone they have heard has a mental illness, they automatically think of mental retardation, or the more isolated acts of violence to diffrent people or people that act out their reasons to take another life or their own. What I think needs to be done is to find a forum for people that the myths about mental illness can be presented from the suffers of a mental illness. You would be suprised at how many family members other that just the immediate family really knows about it. I think there is a need for people to become more aware of what pain and suffering a person and family goes through, the guilty feelings the sheltering of a family with a consumer and there is a need to communicate what it is like for the people that have a mental disagreement and belief, ie. mental illness, and there needs to be more communication and education by the public that there is more to mental illness and the truth should be told.