How does an eating disorder relapse begin?

For years, my eating disorder left me starving for more than just food. During episodes of restriction, binging and purging, I was also starving to share the truth. I was coming to the realization that I was bulimic, but I lived in fear of being labelled crazy if I spoke out. So, instead, I told myself lies, which unchecked, was a secret that could have killed me in the long run. (read: Secrets in Eating Disorder Recovery) 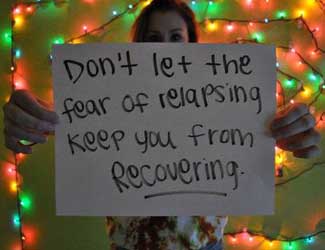 An eating disorder relapse is never an impossibility, no matter how far along you are in recovery. Even though I’m recovered from bulimia and have not engaged in self-harm behavior (e.g. purging or binging) for five years +, I’m still no stranger to hitting a rough patch here and there. This past Spring, I was (and still am) grieving the loss of someone very close to me. For months, I’ve had to fight back against that little voice in my mind; that bully which started to creep up on me again. My trigger in this case was the sadness and helplessness that facing the death of a family member brought out.

In the weeks following that loss, I went back to my old patterns of trying to pretend I was okay, when I really was not. Luckily, my support network is better this time, but I still struggle to share with people who aren’t close family and friends that I’m not 100% okay. In the last few weeks, I became aware that my eating habits were becoming disorderly. You know the drill, it starts by subtle shifts: missing a meal, restricting during others or eating more than you normally would, etc. I consider these forms of self-harm and I knew I was heading down a slippery slope.

The little voice in my head was telling me I was lazy and weak for feeling the sadness I felt. I slept less, I cried a lot. I thought I looked like hell, yet I would put on a brave face. As you’ll notice, I still kept my daily routines. I went to work. I also continued to guest blog here. As before, I had become a magician, able to keep up appearances, while suffering inside. In my case, I’m almost too good at hiding how I feel inside; which delayed me obtaining the help I needed. Eventually, that disharmony only ended up feeding the dormant eating disorder.

A Humbling and Empowering Experience

Thankfully, my past experiences helped me block it from progressing to the point where I would binge and purge; I’d told myself many years ago I would never go back to that no matter what! But I’m sharing this to show that even recovered people will need to fight sometimes very hard to prevent an eating disorder relapse, but that with the right support, it doesn’t mean you have to. Actually, that I was able to face a hard event and not relapse, to me, was actually empowering.

The Key to Preventing an Eating Disorder Relapse

We’re taught from a young age to suck it up, to bite the bullet, to smile and do our best to have a good day. Yet, sometimes that works, but sometimes it doesn’t. Sometimes life kicks you in the gut and it’s okay to be shell shocked and to not be okay for a while. And very often if you’re recovered or in recovery from anorexia or bulimia when that happens, the first thing that might be affected is your eating habits and your self-image. When that happens, I urge you to do whatever you need to avoid an eating disorder relapse. Call your mom, your dad, your husband/wife, your boyfriend/girlfriend, your friend, a helpline, ask for peer support, text someone! Just do whatever you need to do to get help and to avoid keeping your pain a secret. That’s what I did. I avoided a relapse, and the only reason I did is because I reached out to get support from my friends and family. I urge you to do the same. I would not be able to share my story with you today, at least not so soon, if I had not told others I was in over my head and couldn’t do it alone.

Thank you for sharing. I just celebrated a full year of recovery from everything. On 1/4/14 I had a year without purging anorexia, on 2/9/14 I had a year without self injury and on 1/22/14 I will have 25 years of recovery from alcohol. I attend 12 step meetings for the eating disorder and it is a daily commitment and sometimes just a moment by moment commitment, but I have an amazing group of supportive people through my meetings and a therapist and a wonderful best friend and even my sister is mostly supportive. I could not do this alone. I am truly grateful for the support I have because I know there are people who do not have that. I encourage everyone to find support even if it is through online groups.

Hi Christine!
Thank you for writing and congrats on your recoveries!! Yo uare right in saying that this is a daily commitment! Support is also necessary and I'm happy you have found much of it with family and a great network. I can completely relate when you mention that's it's moment by moment at times...As you mention as well, finding support in an online ocmmunity can be a wonderful way to never feel 'disconnected' from like-minded individuals who can relate to our struggles and who can also champion our successes! More on that next week on this blog! Thanks again Christine and keep it up!

I think everyone I have reached out to in the past is tired of hearing about it. I have tried a couple of times with a close friend and with family. They seem to not care. I will check out your self-care post. Thank you for replying to my post.

I can certainly empathize with the lack of openness you might face from ppl even though you are ready to talk. Perhaps taking it to a profesh might be the route tot go at this point if you can. As well, a number of help lines might be available to you..: sometimes it's easier to speak to someone who doesn't know us, is a trained profesh and is essentially there for that purpose, which is hearing these kind of things from ppl suffering from ed. Best of luck! #staystrong

I am struggling with a relapse. I have only been in recovery for about 2 months. I moved to a new town and have been out of work since we moved here. It has only been a month since our move and I just found out yesterday that I am now employed. But the last couple of weeks I have slowly gone back to old habits; restricting, counting calories and carbs, exercising more, and weighing myself daily. I finally told my husband today and he asked if I had called anyone. I have. I left a message for my counselor but she didn't call back today. I just thought I would reach out to someone out in cyber space who might understand how I feel and give me some suggestions before I get lost again in my addiction.

Thank you for reaching out Cindy! Waiting for an answer when reaching out for help is difficult. I can only empathize with you!
Based on personal experience, I would suggest that you continue to reach out while waiting for that call back, and continue to confide into someone you trust, like your husband.
Now, on your own, in your own mind, try to focus on getting through moments one by one and on feeling ok bit by bit without self-harm behaviors. Do something that makes you feel good, that allows you to have compassion for yourself. I'll have a post on self-care out in a couple of days! #staystrong.

Thank you! I appreciate your comments. I can only hope women and men coming across these posts will speak out too. #staystrong
good luck on your upcoming projects @NEDIC. We'll connect again on Twitter I'm sure ;)
P.

We at NEDIC believe "one of the most deadly symptoms of eating disorders is silence". Thanks for sharing your account with so much courage and candor, and helping to break that silence.