You’re Bulimic? You Do What?!

Warning: This specific article is graphic and may be triggering.)

My bulimia was a pallet of colors. As dreamy as that could sound, this wasn’t as innocent as a coloring book, rather colors were my guide. For years, I memorized the colors of the foods I would consume so that I’d know when to stop making myself throw up. If I knew the last ‘bad’ food I’d had hours before was, say, mint ice cream; I‘d make myself sick till I threw up sea moss ribbons and moved into a steady flow of yellow liquid. Yellow meant bile, yellow meant stop. Yellow was good.

Bile was always a great sign. It meant there was nothing left in my stomach. When that would happen, I’d slowly get up from kneeling position, turn off the bathroom lights, wipe my mouth and brush my teeth. At that point, I was surrounded by darkness. Pitch black. Why lights off, you may ask? Because after an episode, I couldn’t handle looking at myself; it was one thing to feel disgusting, but it would have been another one to actually see myself going through the aftermath of trying to cover ‘it’. At least in the dark, while I could picture the scene in my mind’s eye, somehow actually seeing myself in the mirror going through the motions was unbearable.

Repulsed By My Own Bulimic Behaviors 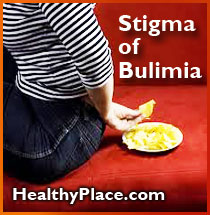 Looking back, I’m repulsed at the behaviors I did while I was bulimic. I suspect it’s also why it took me a long time in the very early stages of bulimia recovery to open up about my condition. My eating disorder was the most isolating experience of my life. I felt the stigma that came with living day in, day out with a mental illness. Perhaps the most isolating element was that to the outside world, I still looked fine; that is, until it was almost too late. From my experience, the worst part about suffering from a mental illness was that I looked normal; highly functional even, but this image I presented the world with had nothing to do with how I really felt inside.

Even when I started to disclose my bulimia, I could see disbelief and disgust in the faces of some of the people I’d open up to. With time, I understood why. They couldn’t picture me, the person in front them, starving and then eating every possible item during a binge episode, only to throw it up moments later. If I did share, and even when I do now, I’m usually told many variations of “I never would have guessed if you hadn’t told me.” Physically, I looked incredibly normal. I’d eat when I’d go out with friends, but memorize the food colors for when I got home. The skin around my mouth was dry from so much exertion but, the enamel on my teeth was a normal white (though with time the enamel would have worn down from the stomach acid). My weight fluctuated, though to my dismay, I never went below a size 6 or 138 pounds.

Today, I sometimes catch myself agreeing in my mind with the comments I’ve been told over time. Yes, my bulimia was a disgusting and disturbing experience, but it doesn’t take away from the fact that at the time, the behaviors associated with the disease were something I couldn’t stop doing. I had a mental illness and with the maturity of the experience behind me, I believe that what is even more disturbing is not to talk about the whole thing. What is more disgusting is to pretend it’s not happening at all. Until, we are willing to admit it to ourselves and share our experiences with others, communally, we are just facilitating the problem. Much like in the case of any mental illness, ignoring the condition won’t make it go away.

I’d like to end this blog by sharing some of my experiences with you, in light of this week’s topic. At some point, when you do decide to share your eating disorder condition with people, here are a couple of things you might want to consider:

At the end of the day, speaking about your eating disorder is one of the first steps in the recovery process. Much like a blank canvas, it’s the first splash of color you need to cast in order to paint a bigger and better reality for yourself.

I’d love it if you shared your thoughts and experiences with me about ‘coming out’. How was it? What prevents you from it if you haven’t?

Recovering From Bulimia vs Recovered From Bulimia
Bulimia Recovery: Admitting You Have Bulimia
Amanda
December, 4 2014 at 4:38 pm

Thank you for sharing this. I am currently a freshman in college and my parents know nothing about my Eating Disorder... I don't want to tell them. They don't understand me at all and I know they would be so disappointed with me. I just started the recovery process about a month ago and to tell you the truth I am failing. I [edited for triggers] to throw up. It is just so hard. I don't know what I'm doing. My counselor wants me to go to the doctor, but I just can't. I can't bring myself to do it.

Amanda,
I'm really sorry you're having to deal with an eating disorder on top of your first year of college. Either one is stressful alone, but together it is miserable. I certainly wish I had gone to a counselor my first year - I suspect my college experience would have been very different and far more enjoyable. Telling your parents is a huge step, and a difficult one. In my experience, I was terrified of disappointing my parents as well, when all they really wanted for me was to be happy.
A big part of telling them was making sure I had support ready to back me up and listen after I told them (my counselor and some friends who knew what was going on) and then educating them. Your therapist (and doctor - you really should see one!) can be really vital with that.
Thanks for commenting and keep coming back and letting us know how we can be helpful!
Jess

Natalia,
Thank you. I appreciate your comment.
I was in too deep and couldn't tell anyone I cared about.
How do I summarize the 24 years or so of our friendship? How do I begin to explain, that really, for most of my life, til 5 years ago, I wasn't really myself, not with you, not with anyone else.
Thank you for being there this morning on Gmail and here too.
Thank you for having been there all along.
xo
P.

I do not have an eating disorder but have a friend that did and I never knew about it.
a) If you tell someone and their response is "that's disgusting", you should walk away no matter what and without a doubt...Don't try to reason with them. Here is why: that person clearly has no empathy, no sensitivity and more importantly no brain to react like that to what is nowadays widely known as a severe mental illness that needs to be handled very carefully.
b) When you decide who you want to tell, think again. Chances are you're choosing the easiest people to tell which could very well be the wrong people that in the end will either disappoint you, say something that will have an adverse effect on you, or even worse will do nothing to try to help you.
Maybe the most unlikely person is the right person to tell...

Hi Vicky!
Unfortunately, people assume if we can hide something so well, then it means it just doesn't exist. They couldn't be more wrong. It was very real for me, just as the condition was very real for you.
People are disgusted, and knowing that that is the reaction we'll get for opening up is part of the stigma. We need to change that! Won'T happen overnight, but by having blogs like this one and readers with lived experience commenting, I'm confident we can change things bit by bit.
I'm happy to hear you've recovered & reached out!
Take care.
P.

I had mixed responses when I disclosed that I was bulimic, the first time I was told I couldn't be doing if I was able to say it so for years I kept it hidden. I used to visualise who would save me from the bulimia & cling on to that hope, when I tried again I found a mix of support & disgust. Eventually the support helped me into recovery & I'm grateful I made the decision to reach out.
A great blog, knowing other people were able to speak out gave me some strength when I needed to tell someone.

Hi sweetchild92!
Big decision, congrats on having gotten there!
I'm happy this blog gives you the opportunity to discuss and share. It's so important not to be alone in recovery. Support is paramount!
Thank YOU!
P.

Thank you so much, I plan on telling my mom this summer, either this week or later in June when I come back. Bc of graduating, I can't see the RD at my school, so that gives me a platform to discuss seeking advice from the ED center near me, etc.
Thank you again !

Congrats on your journey to recovery & on your upcoming graduation. Admitting it out loud to someone you love, trust, is a major step. You have my support!
It's also normal to only tell a small number of people at first and then when you'll feel comfortable, that circle will expand naturally. Good luck!

I began recovery around September/October. I live in my college town (graduating in a few weeks!) a couple hours away from my parents. I still have yet to tell them, I'm just so apprehensive. My mom might know...she refers to it as "food issues" and knows about my dietician/refeeding. But like...actually ever saying "I was diagnosed with anorexia" makes me want to run and hide.
I haven't told anyone, actually, other than my treatment team. Wuss move, but I'm an A+ "I'll do it later" type person.