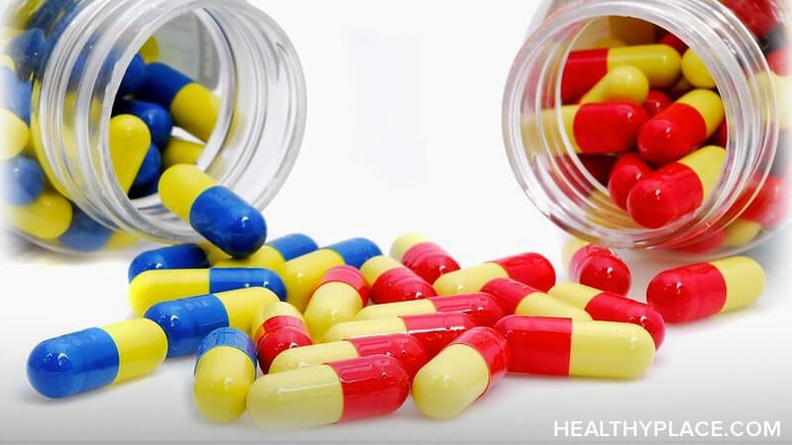 Antipsychotic Medications Are Not Just for Psychosis

There is a huge misconception, and not just among those with DID, that antipsychotic medications, like those on this list, are for people with psychosis. While it is true that this class of medications has traditionally been used to treat people experiencing psychosis, these medications are also useful for treating other symptoms and mental illnesses. The same goes for other classes of psychotropic medications.

People with DID React Differently to Antipsychotic Medications

As with any medication, there is no guarantee it will work as intended. Many people with DID function quite well on antipsychotic medication. They still have communication within their system, and their other symptoms are relieved. However, other people with DID say that antipsychotic medication makes them much worse, to the point where they were unable to think or to communicate with their system at all. They become unable to hear the voices of their alters, which throws everything into chaos.

The Stigma of Using Antipsychotics in DID

Another belief is that taking an antipsychotic medication means you are psychotic. That is not true. If you want to know why your doctor has prescribed an antipsychotic, ask. Don't assume it's because he or she thinks you're experiencing psychosis. It may just be because it's a better option to help with your other symptoms.

If you feel like a medication isn't working for you, reach out to your doctor and tell them your concerns. There are options out there. One of them may just be an antipsychotic.

Tags: antipsychotic medications and DID

Balancing Dependence and Independence When You Have DID
My Dissociative Identity Disorder Diagnosis: 3 Years Later
Cassandra Johnson
February, 22 2021 at 3:14 pm

Great article!! I have had side effects from the meds I have tried over the years. Peace of mind is everything to me and if putting the alters to sleep provides me with mental and emotional stability then so be it. Current diagnosis, Dissociative Identity Disorder, has put everything into perspective, I'm on my, healing mentally and emotionally!! God is good!!

Hi. I suffered very early csa and prolonged and severe peer bullying and have been having psychodynamic art therapy for 16 years. Although not officially diagnosed, I have discussed matters with my therapist and he agrees that I have been left with several 'descriptors' of various personality disorders and that I also exist in dissociative states.
Due to my symptoms arising from traumas and personality dysfunction I have decided to choose psychotherapy as my treatment choice rather than medication as I dislike the side effects of SSRIs and I also dislike being altered 24/7 as these leave me bordering on the hypomanic which has led to me making some poor life choices in the past. Also they prevent me working effectively with my distinct parts of self in therapy so my chances of eventual recovery are basically none with these meds.
Lately I have been troubled with labyrinthitis and was prescribed the standard treatment which also happens to be a low dose of prochlorperazine (15mg daily in 3 divided doses). I was totally unprepared for the effect it would have on my mental processing and wondered if this could be seen as either confirming or disproving a diagnosis of DID (on top of the PD, not instead of).
First of all I have daily problems with overactive thought processes and pressure of speech which causes a lot of dissociative symptoms such as lapses in memory such as you might expect of a much older person!! I have identified 8 'parts' which have names and 2 are abusive and controlling. They make my life very very difficult. I see them as aspects of my personality and they have names which enables me to work with parts of my personality psychodynamically. I don't see them as seperate 'people' although they do have different sounding voices and different body language. I also don't like 'owning' the 2 abusive parts but I guess that's part of the PD seperate good/bad dynamic.
I expected the medication to slightly sedate me and thought it would feel the same as a low dose of diazepam. Not so! My 2 abusive parts sort of 'went to sleep' I couldn't make easy contact with other parts either but that's not unusual for me. In any case, for the first time in I think ever - I felt like I only had one 'person' in my head. I was as I said a little 'stoned' but I have taken recreational drugs before and none of them have 'sent parts to sleep'
Is this a typical response to anti-psychotics? Could it be a placebo effect? I have decided that even though the vertigo is sometimes bad that I cannot do my daily therapy work so have been only taking the tablets to get relief when my abusive parts are making me feel very bad and that seems to be working.
Does anyone know whether I might be able to get my GP to prescribe these to me for PRN use for mental health? I really don't want to have to see a psychiatrist as I'm hoping for recovery one day and don't want a permanent PD label.
I cried after I took my first one as it felt like I was finally getting some rest... But like I said -maybe a placebo, I am pretty suggestible!!
Thanks.
M.

This article is correct in saying that sometimes Antipsychotics can keep you from communicating with your system at all. I'm on one right now and I can't talk with my alters at all. It's awful.

Good article! Sometimes these types of meds have been a life-saver!