Why Dissociative Identity Disorder (DID) is Often Misdiagnosed

Dissociative identity disorder (DID) is often misdiagnosed, but the right diagnosis is essential for anyone experiencing a mental illness. Treatment plans, therapeutic interventions, and psychiatric medication choices rely heavily on a person's diagnosis. But what happens when the diagnosis is wrong?

For those with DID and other dissociative disorders, the likelihood of misdiagnosis is high. Research shows that people with a dissociative disorder spend an average of seven years in the mental health system before receiving a correct diagnosis. When dealing with dissociative identity disorder, misdiagnosis leads to years of improper treatment and little to no symptom improvement. For some, symptoms may actually get worse.

The Similarity of Symptoms in DID and Other Disorders 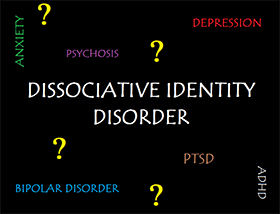 One of the difficulties in properly diagnosing DID is the similarity of DID symptoms with symptoms of other psychological disorders. Those with DID can show signs of anxiety, depression, substance abuse, borderline personality disorder, eating disorders, and/or mood disorders. Therefore, it is not uncommon for people with DID to receive several diagnoses before finally being diagnosed with DID. I spent 14 years in the mental health system and received nine different diagnoses, from bipolar disorder to attention-deficit/hyperactivity disorder (ADHD), before being diagnosed with DID just this year. Looking back, I did exhibit some of the symptoms of each disorder at different times, but those symptoms are also a part of my DID.

It is also possible for an alter to have symptoms of a mental illness that is not shared by the host. An alter may have an eating disorder and show symptoms whenever present, but the symptoms disappear when that alter is away. This can further complicate the process of receiving an accurate diagnosis and getting proper treatment.

DID affects 1% of the population, making it a major mental health issue. Despite this, DID and dissociative disorders, in general, continue to be the least explained and the most misunderstood of all psychological disorders (4 Common Misperceptions About DID). During my undergraduate studies as a psychology major, I remember reading entire sections on depression, bipolar disorder, schizophrenia, and various personality disorders.

When it came to DID and dissociative disorders, all that was given was a vague explanation of dissociation limited to a paragraph or two. I've known several graduate and postgraduate educated counselors who admit that their knowledge of DID is minimal in comparison to all of the other psychological disorders. How can professionals properly diagnose a person if they don't have all of the knowledge they need to make an informed decision?

There is also continuing debate over the validity of DID. Some members of the professional psychological community do not recognize DID as a real disorder and, therefore, do not diagnose it. Then there are those that believe DID exists, but only in the exaggerated way DID is often portrayed in popular literature and media. Both beliefs can contribute to a delay in getting the right diagnosis.

Be Your Own Mental Health Advocate When Being Diagnosed with DID

It is important that you advocate for yourself, especially if you believe your diagnosis is wrong. If you suspect that you have a dissociative disorder, find a professional who has experience working with trauma and dissociation; they will have the most knowledge and should be able to provide an accurate diagnosis. It is also important that you are honest and upfront about your symptoms, which is easier when you find a psychologist or therapist that you can trust. Once you are able to get the right diagnosis, you can create a treatment plan and start the path to managing life with DID.

Do you have any scholarly references to back your claims here? I am doing a research paper and am finding a difficult time finding current research on the subject of misdiagnosis of DID

Hey, I can only speak of personal experience... I still lived with my abusers at that time and I now know I am DID.
It started off with heavy flashbacks; I went into therapy and the first question was have you ever heard voices... (at this point I did not know about my DID) and the referred me to another instution (I believed it was BPD as I was called attention seeker several times before btw it was 2 BPD "friends" mostly; ohh the irony).
In the next treatment center I was more stable... and I talked about abuse and the therapist was with me all the time but her comments consisted off:"here you are pushing your father away" "you See yourself as the victim" "do you really believe this" "are you sure" "aha this must be your reality" blablabla.
Even though I talked about DID she wanted me to take antipsychotics or made BPD esque therapy. (She said multiple times I do not have a psychosis; which was later also Backed up by the Hospital I went to.)
On the other side she said things like stop behaving like a child (maybe she alternated between DID doesn't exist he must be attention seeking and this stuff is horrible he gotta have a psychosis; I don't know.)
Really damaging experience afterall, while I got threatened by the pereptrators she disbelieved me and pushed me into denial.
She pulled all kind of memories without any stabilization and even disbelieved me while "abreacting" and I was horribly retraumatized without any support.
I left after 4 months.
When I came into her therapy I was a mess... left totally destroyed.
Maybe this makes clear how damaging it is, it gave me horrendous seizures (kinda like Shell shock) and the worst Mindset, it took the little self worth I had built up beforehand...
But now everything is in a better Place and I will go to University soon and maybe try therapy again.

I am writing a paper on the misdiagnosis of DID and was hoping you had some insight or references you could share?

Thanks for the facts. You are right in that it doesn't make sense why more training in dissociation isn't given to therapists.

Glad you finally found your issues and can now recover and have a happy direction in life.