Do I Have Dissociative Identity Disorder?

We were talking about dissociation when a man I once knew told me he'd been entirely unaware of a hospital stay until he got the bill. I didn't say it, but I immediately thought, 'he obviously has Dissociative Identity Disorder.' I now know how presumptuous that was. Though his experience was clearly indicative of something outside of everyday experience, it's taking a lot for granted to assume that something is DID. And looking back, it's absurd that I was so convinced. Not satisfied with a second opinion of my own diagnosis, I sought out four. One would think someone as hesitant to jump to conclusions as that would exercise a little more caution. 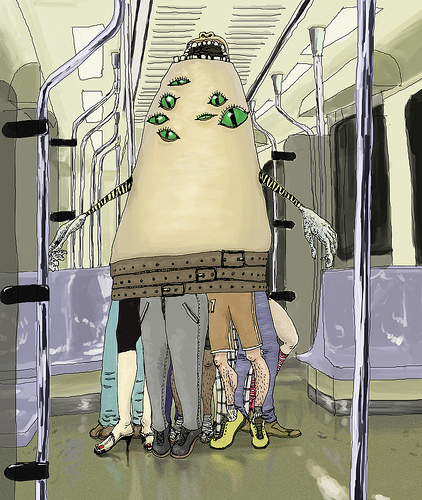 On Monday I published the last of a five part series titled What Is Dissociation? What I hoped to convey with that series is that, as Deborah Haddock says in The Dissociative Identity Disorder Sourcebook, "DID is an extreme manifestation of what we all experience to a much lesser degree." Most people experience dissociation in all of its five primary forms from time to time - depersonalization, derealization, dissociative amnesia, identity confusion, identity alteration. Clarifying the mild to moderate dissociative symptoms that we're all acquainted with is vital to demystifying DID. The diagnosis will always seem otherworldly and exotic if the condition isn't explained in a way people can relate to.

Dissociative Identity Disorder Is Not Normal

"Normal is a setting on the dryer" - I've heard it too. But I don't buy it. There is a range, albeit wide, of experiences that most of us can agree are normal. DID doesn't fall within it. A bold statement perhaps, but it's true. Most people do not have Dissociative Identity Disorder. I want very much to humanize DID and show that, in so many ways, people with it are normal. But I don't want to suggest that the disorder itself is normal, though dissociative disorders in general are more widespread than we once thought .

As such, diagnosing it is a job for experienced clinicians. Particularly when you consider that resistance to exposure is part of the disorder. Contrary to popular belief, Dissociative Identity Disorder isn't at all easy to spot. Books like The Stranger in the Mirror by Marlene Steinberg and Maxine Schnall or The Dissociative Identity Disorder Sourcebook by Deborah Haddock are excellent introductory resources. The former even contains screening questionnaires that can help you decide if you should see a therapist, though they're not diagnostic tools on their own. No blog, forum, book, or friend can tell anyone that they have DID. Neither can most therapists, though I hope the majority possess enough understanding of dissociation to recognize when a client might need more specialized treatment. If you think you may have DID, consider asking your therapist about it or seeing a therapist if you don't already have one.

What Is Dissociation? Part 5: Identity Alteration
Dissociative Identity Disorder Video: My Diagnosis
Dana
October, 7 2010 at 10:18 am

Holly-
I read this and my instant thought is thank God someone else understands the need for proper diagnosis. I have been around the world and back on DID support websites and something I see very commonly is people self diagnosing or peer diagnosing DID. This just isnt practical.
If I were to say I am a purple person then I painted my body purple and looked in the mirror, I would see a purple person. But does that really make me a purple person or just someone that for some reason thinks I am a purple person.
It is crucial to getting help to be diagnosed by someone that knows DID and the diagnostic tools. Sorry mini-rant. Just to say if you think this is a problem for you see a therapist or psychiatrist that knows how to diagnose and treat it.
Dana

Hi Dana,
I have been around the world and back on DID support websites and something I see very commonly is people self diagnosing or peer diagnosing DID.
I've seen a lot of that too. Sometimes it's genuine confusion, e.g. my conviction that the man who didn't know he'd been in the hospital until he got the bill had DID. And he might very well have Dissociative Identity Disorder. Still, I'm glad I didn't have the presumption to say so. He was already confused. Throwing DID at him might have muddied the waters further.
But sometimes it's something more. DID has been romanticized by entertainment media. Those with it are often perceived as tragic, wounded, and highly gifted creatures. I'm not sure what's appealing about that, but without a doubt something is, and therefore it's imitated more often than I would have guessed.
I also believe that if you are severely dissociative to begin with, it's not that difficult to become convinced you have DID if you don't know much about it. And that must be a very confusing and frightening experience. This is where a skilled clinician can provide the most help, I think. How frustrating it would be to try to live with a disorder that is similar to what you have, but not quite it. I would imagine it's maddening.
Thanks for your comment.
Purple, huh? ;)