Why I Sought God in Early Sobriety

I sought God early in sobriety. Faith in God or a Higher Power is a controversial issue among recovering alcoholics. Many of us grew up in homes where religion was forced upon us and consequently eschewed prayer or reliance upon any God later in life (Addiction Recovery Programs: One Step Forward, 12 Steps Back). For myself, I was not opposed to the concept as much as others, and found, in early sobriety, that it was a great comfort to me. Here are the reasons why I felt compelled to find belief in God in early sobriety and how I did it.

Recovery programs use reliance upon God or some Higher Power as a source or strength in adversity and challenge. However, faith in God is not something you can just will yourself into developing. Even though I had been exposed to faith and religion from childhood, I had lost the hope and inspiration that comes with a strong faith as a result of my alcoholic drinking (Mental Illness Lies Some Christians Believe). When I got sober, I was given a dual diagnosis of alcoholism and depression. In my debilitating state of depression, life held no meaning for me and I hated the person I saw in the mirror every day. Finding faith in God was instrumental in restoring my inspiration to live.

First Days of Sobriety (Without God)

In the earliest days of my sobriety, I did not pray to God, at least not in the traditional sense. In the hours where my emotional turmoil was worst, I would silently plead for the 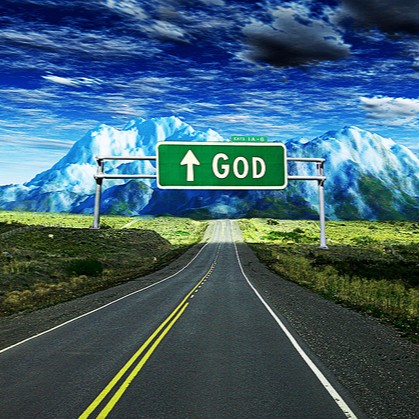 feelings to stop and the fear to leave me. Looking back on it now, I consider those silent pleas to be prayer. If you had asked me then what I was doing, I would have simply said I was trying to change the way I felt.

At the time I entered sobriety, I had all but completely cut myself off from the God I was raised with in Catholicism. Instead, I focused on developing relationships with other people to overcome my loneliness. Slowly, I opened myself up to the people closest to me: my doctors and therapists, my immediate family, and, finally, other patients in the rehab facility where I attended inpatient treatment. It brought relief from the pain because I felt understood and supported, but it did not restore my desire to live or pursue life.

I began my search for God when I was in rehab. The rehab I attended was not based on any one, established recovery program but instead used behavioral modification and education to transform their clients. Even so, they taught us about a myriad of recovery programs and how they worked. During one of our sessions, we discussed the spiritual or religious components of many self-help groups. Counselors encouraged us to research any religious and spiritual systems that intrigued us.

At first, my approach was strictly intellectual. I purchased books about meditation, spirituality, angels, and one on Native American religion. I merely sought to understand the teachings. As I read, I began to feel serene, balanced, and hopeful. The words of these spiritual books justified feelings and ideas I had repressed, and explained others I never understood.

This is when my inspiration to live returned to me (Alcoholism Recovery Is The Most Important Part Of My Life). I not only felt a responsibility to stay sober and confront my problems, but I also felt hope for the future. Rediscovering a sense of purpose completely changed my outlook on life. I imagined a new future for myself, one where I could grow and develop and attain a better life. At that point, staying sober one day at a time became more manageable.

APA Reference
Doyle, B. (2016, April 14). Why I Sought God in Early Sobriety, HealthyPlace. Retrieved on 2023, January 29 from https://www.healthyplace.com/blogs/debunkingaddiction/2016/04/why-i-sought-god-in-early-sobriety

I have relied on God for my healing and confidence. Psalms and the Sermon on the Mount has helped. Good luck on your continued recovery. It has been a few lousy years for me.