I am not a fan of the term “drunkorexia” mainly because it is not a medical term, nor a diagnostic category of the DSM. I also worry about the sensationalization of terms that are made up and shared all over the media to gain attention. I do however recognize its ease of being a descriptor, and how people can automatically connect what the struggle is about (The Link Between Substance Abuse and Eating Disorders). Overall, I wish we would see the terms co-existing conditions or co-morbid struggles to help educate the public on co-morbidities and how common they are amongst many mental health issues. 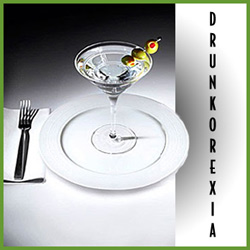 "It's a sensationalized term, but it's a tangible idea for students," acknowledges Emily Hedstrom-Lieser of the Drug, Alcohol & Tobacco Education Office at the University of Northern Colorado.

I also get slightly annoyed when they say this is a “new” trend, when these struggles are anything but “new”. It is however a growing trend we are reading about. A new study by the University of Missouri says 20% of university students engage in this behavior where people restrict food intake while drinking copious amounts. There are many reasons why, and one of the main addressed reasons are to exchange caloric intake; basically modifying total caloric intake in an unhealthy behavior.

My Personal History With Drunkorexia

In college I would restrict my food so I could get drunker faster. I had a crazy high tolerance (which is an indicator of potential struggles with abuse and addiction shown in studies), and wanted to get a fast buzz, without having to drink on a full stomach. This wasn't during my eating disorder, this was something I remember doing all throughout college, as if it was second nature, and not something to question. I also know others would skip dinner and meals, because drinking to get buzzed at a party was the thing that helped connect us, have fun, and be an outlet from the stress of classes.

Not everyone who struggles with restriction, or restricts to drink more has a diagnosable mental condition. It is an extremely unhealthy and dangerous behavior, and if a person is susceptible to eating disorders or addiction, it can be a trigger point into a larger struggle.

We hear a lot about the unhealthy binge drinking that occurs on campus, and I am glad we are seeing more discussion on the dangers of unhealthy eating and binge drinking behaviors co-existing. There was recently a press release from University of Missouri that addressed this concern:

Female college students are particularly susceptible to developing drunkorexia because of physiological demands and social pressures. In comparison to the male body, the female body is less able to process equally consumed amounts of alcohol during bouts of heavy drinking and therefore suffer the effects of alcohol quicker and with more health-related damage. The problem is further exacerbated by social peer pressure to maintain a thin figure and to be “one of the crowd” during heavy drinking binge parties or while clubbing with friends.

I think this is absolutely part of it, but I do believe that it isn’t always behavior driven by the desire to lose weight, just as not all eating disorder sufferers will say they do it to control weight alone. If there is one thing I have learned as an activist, it is crucial to educate people on the complexity of these struggles.

For me personally, it was merely to feel drunker faster (should have seen as a warning sign for things to come). I never thought about trying to lose weight, until I did develop my eating disorder in my junior year, and then I was in a firestorm of eating disorder behaviors, binge drinking, and the deadly and dangerous collision leading to blackouts, scary behavior, and loss of connection to my authentic self.

More from the Missouri Press Release:

People who participate in disordered eating combined with binge drinking are also more at risk for violence, risky sexual behavior, alcohol poisoning, substance abuse and chronic diseases later in life. Osborne says women are at higher risk for health problems related to binge drinking because they metabolize alcohol differently than men. This means women can get sick faster and suffer damage to vital organs sooner than men might.

Victoria Osborne, assistant professor of social work and public health, explained the obvious dangers of all of this “depriving the brain of adequate nutrition and consuming large amounts of alcohol can be dangerous. Together, they can cause short- and long-term cognitive problems including difficulty concentrating, studying and making decisions.”

How Do We Address Drunkorexia and Binge Drinking?

A study published in the July 2009 issue of the International Journal of Eating Disorders found a connection between binge drinking (four or more drinks in one sitting) and eating disorders. The authors suggested that there is a "crucial need for early interventions targeting binge drinking among college-age women regardless of their current drinking status." I absolutely couldn’t agree more!

We need to educate the public, college students, parents, and on campus support organizations about the dangers of unhealthy food and binge drinking behavior. A lot of college campuses have alcohol education programs for students, but it is important that young people understand the dangers and long term health consequences of disordered eating and binge drinking, alone and together. We need productive and impactful programs that actually are showing decreased binge drinking and disordered eating behavior, not only for prevention and intervention, but for support and resources for those who struggle.

From Financial Struggles in Addiction to Financial Security in Sobriety
Winehouse Death Due to Alcohol Poisoning and Tolerance
Kelly
October, 21 2011 at 7:18 pm

Thank you so much for an informative post on an important topic.