Quitting Depression Medication On Your Own A Very Bad Idea

Quitting your depression medication without the doctor's help can lead to trouble. In fact, getting off your antidepressant medication on your own is a very bad idea.

I know, because I did it.

I haven’t always suffered from depression cycles, or “dips”, as I call them. They started only a couple of years ago, perhaps because I am getting closer to menopause. In any case, I became so frustrated with my depression dips that I decided to go off my antidepressant medication, after having been on them for the better part of ten years, without the advice of my doctor.

I did a very poor job at the weaning component. I went from taking 30mg of Cipralex a day to 20mg to 10mg to nothing within a week.

Side Effects of Stopping Depression Medication

At first, I didn’t feel much. Within about 72 hours, I felt the first zap . A distinct, sudden zap deep inside my brain.

I thought it was my imagination. That, or I had walked over some intensely static-y (yes, I know that’s not really a word) carpet. Doused in denial, I ignored it and went on with my day.

A few hours later, it happened again… then again, and again, and again. Within a day, these brain zaps were happening every ten minutes – sometimes more. They could not be ignored.

Allow me to digress, if I may, to try to explain what these brain zaps felt like.

I didn’t really call them brain zaps at first. I called them buzzers because that’s what they felt like - like buzzers, heavy on the fleeting B, heavy on the prolonged ZZZZZ.

When it happened, the effect of the buzz actually caused me to stop what I was doing, if just for a split second. My eyes would dash to the left or the right, quick, almost indiscernibly. The entire affect would take less than a second or two.

Eventually, when the denial caught up with me, I started searching the internet for “brain buzzes” and “feels like a static shock in my brain” and finally, “brain buzzes” + “withdrawal”. 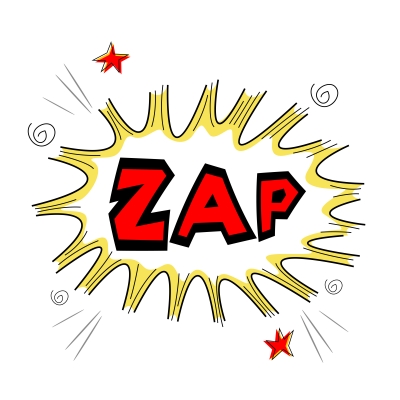 I finally hit upon the term brain zap in direct correlation to withdrawal from depression medication – particularly when weaned off the medication too quickly. I read that sometimes the brain zaps can last a week, other times they can last up to six months! Oh joy! (read: How to Switch Antidepressants Safely)

Thankfully, mine lasted about three weeks before they finally tapered off.

Of course, what followed was a slow (is three months slow?) and painful slide back into a major depressive episode.

Why I Quit Depression Medication

Stopping my depression medication on my own was idiotic. I know that now, but I had to because I needed to know two things. First, I wanted to know if the dips would go away. They didn't. Now that I'm back on my depression medications, I know that. Second, and more importantly, I learned that I will need to be on antidepressants the rest of my life.

And… I’m okay with that.

That First Depression Diagnosis -- A Blessing and a Curse
Group Therapy for Depression – Help or Hindrance?
Dr Musli Ferati
August, 9 2013 at 9:55 pm

I went off my meds cold turkey because I was feeling crappy. Well the crappiness got MUCH worse and I had to go back on. It feels like a never ending spiral. Meds don't make me feel much better but no meds brought severe depression and anxiety.

i went off of zoloft with disasterous results. First i was being treated for depression instead of bipolar. Than I got the brilliant idea that I could have a life without medication. And I started to have what is called day mares nightmares during theday. I never quite recovered from that mess. Now i am on at least seven different medications that i have to take forever. Moral of the story folks don't go off your meds without the supervision of the doctor.

I haven't had brain zaps - but I have had some absolutely horrible experiences withdrawing from medication. Never come off them without checking with your doctor first. Even then sometimes it's rough. But cold turkey can be dangerous. And it's certainly not fun.

How to Help a Depressed Friend: A Poem of Support to Share
Create a Depression Routine So You Cope and Live Well
Coping with Extreme Anger as a Symptom of Depression
Depression Can Drain You Of Your Will To Live
Dealing with Feelings of Guilt and Shame When You're Depressed