Don’t Let the Media Make You Insecure About Your Beauty 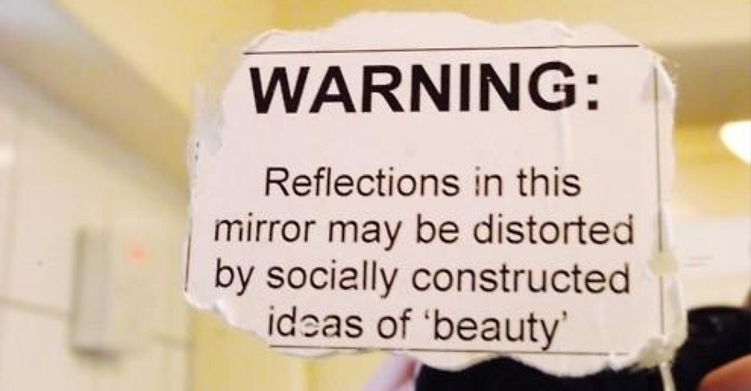 If you're insecure about your beauty, remember that the media often portrays perfected, altered images of idealized beauty to play on our insecurities. The lies about what beauty looks like leads to anxiety and low self-esteem. Low beauty confidence can even play a role in many mental health disorders, as it sets up an unrealistic ideals and creates feelings of ‘I’m not good enough.’ Don't let the media make you insecure about your beauty--here's how.

A client of mine has now sworn off fitness and fashion magazines, noting “I feel worse about myself after I read them.” She’s not alone. In a poll done by People Magazine, 80 percent of women feel worse about themselves after flipping through popular fitness and fashion magazines. It's not just women, men too have been shown to have the same response.

Even the American Medical Association adopted a policy discouraging advertisers from using altered photographs that “promote unrealistic expectations of appropriate body image” which have been linked to eating disorders and other adverse health outcomes. These pictures show unattainable beauty because they have been Photoshopped for hours - it’s not attainable because it’s fake (read more about body image and advertising).

For this particular client, and many like her in the past, becoming educated on the media and advertising tactics, as well as a real effort to stop negative self-talk, has helped her feel much more empowered. This leads to increased self-confidence because we know the how and why of media. When we know the tricks, we are less likely to fall prey to these images.

How the Media Makes You Insecure About Your Beauty

Advertising is psychological manipulation; as it attempts to make us insecure so that we buy the product, or think we need it. Yes, it is important for us to have choices and awareness of these options, however understanding the how and why of advertising makes us more savvy consumers and also empowers us.

The Function of Nearly All Media Is To Sell a Product

The function of magazines and many online sites is not only to provide you with often relevant stories but also to sell advertisements. Many websites and magazines targeting females have been notorious for convincing women that something is wrong with them (e.g., hair, body, sex life, etc.) so that they can sell their product (i.e., the content of the magazine) to fix it. The more anxious they make you, the more likely you will buy the magazine and the larger their readership, which increases advertising sales. The same is true for many men’s magazines, as well as online content. Next time you are reading, look for this manipulation of your insecurities.

Have you ever been on a site reading an article on anything that interests you and on the sidebar you see relevant advertisements related to that? Say you are reading about how to get over a break up. On the side bar, there will be adds for therapist, books, programs, even Match.com and other relevant sites to get you to click. Each click is money in the bank and they are banking on your insecurity.

The same is true for magazines, television and most media. Advertisements are strategically placed behind stories that make you vulnerable to encourage insecure feelings. Open up any magazine or watch 30 minutes of TV and you will notice. I was reading a popular magazine the other day, next to an article on Toning Up Your Thighs and on the very next page a weight loss program was being thrown in your face. This is no coincidence. The ads are strategically placed and set to appear right when you are feeling “not good enough.”

Models Are Photoshopped, Duct-Taped and Clamped to Manipulate Your Purchase Decision

Physical tactics and digital enhancement are used on almost every picture, whether it's to lighten up the background or to alter someone's face. Even though they aren't realistic images, exposure to them makes us more insecure. A famous example is Cindy Crawford. It was revealed that it took 2 hours to Photoshop her!

Additionally, duct-tape is often used to tape breasts together to create cleavage and excess flesh is duct-taped in the back for a front angle photograph depicting a taut, streamlined, wrinkle-free body. Models can be taped from the front for a rear or side angle photograph showing tight, firm hips, bottoms, legs and arms. 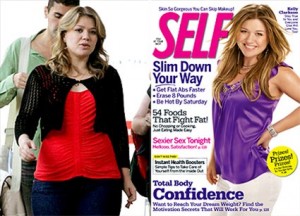 Heavy clamps are used to cinch clothing in and weigh it down to create an illusion of the perfect fit. Just walk by the Gap and look behind the mannequin, they are usually clamped to make the clothes look perfect, then when a human tries them on, it doesn’t fit the same. Not so odd, is it?

Kelly Clarkson's appearance on “Good Morning America” within just days of the cover shoot proved that her body did not look anything like the very thin one that appeared on the cover. In a shockingly ironic twist, the issue she appeared on was titled “The Body Confidence Issue” and featured an interview inside where she explained how comfortable she felt with her body. ~BeautyRedifined.com

How to Be Less Insecure About Your Beauty

Notice what a trigger is for you.

When you become aware of these triggers, this is the time to take a break and really ask yourself, "Do I want to fall prey to this? Someone is making money of my lack of self-esteem. How do I feel about this?"

Try new activities during and after you view media.

If you have a DVR, fast-forward through the advertisements. If the show itself is causing feelings of uneasiness, it may be time to take a break. If you’ve been online for a while, get outside or get distracted by doing something around the house. The more you stay stuck in the media saturated world and out of the real one, the world around you, the less secure you will likely be.

We can't avoid advertising and media altogether. It's simply impossible. However, we can become aware and savvy, as well as teach our children, friends and family to do the same, creating a more empowered environment. Checking in with ourselves after exposure and recalling the how and why of media allows us to become more empowered and secure, capable of living our best lives, not the ones that we perceive to be real on the pages of magazines.

Tags: insecure about your beauty

[…] You Insecure About Your Beauty’. [ONLINE]. Healthy Place Mental Health Blogs. Available at: https://www.healthyplace.com/blogs/buildingselfesteem/2013/01/dont-let-the-media-make-you…. [Accessed 04 May. […]

I love this article. I'm a young black women. When I turn on the media, all I see is White women or women with lighter skin. I've notice that White women are seen as nice mommies. Black are seen as angry black women, single parent mother, ugly, fat, rude. Not as good as White women. I've noticed if I don't look at the media as much, I'm less insecure. I am good enough and one day I'll be a great mom. To all women out there, don't let the media tell you WHO you are. The media doesn't know anything about what people go through.

Great article - it is so true how the media can affect your self esteem - few people can look at these pictures of these beautiful models and look at them as inspiration (to go hit the gym or change your diet) - but for the majority of people (as your stats show) we form a basis of comparison and feel we are just not good enough.