Self-Esteem in Girls: The Media's Role

Girls, today, have an increasingly difficult time with developing and maintaining high self-esteem due to numerous factors. One major contributor to low self-esteem is their exposure to media.

The Dove Self-Esteem Fund reveals 71% of girls with low self-esteem feel that their appearance doesn't measure up; including "not feeling pretty enough, thin enough, stylish enough or trendy enough," compared to the images they are exposed to in popular media. Add in the fact 80% of adult women polled said images of women on TV and in movies, magazines, and ads make them feel insecure about appearance, and we clearly see a pattern. We need to start talking to our girls at younger ages about what media images really are. (see Eating Disorders: Body Image and Advertising)

Pattern to Decline in Girls' Self-Esteem

Leading self-esteem groups for girls, as young as five and as old as 45, has shown me that there is a pattern to the decline in girls' self-esteem. Our dialogue with ourselves begins before grade school. If we can give our children the language and insight to feel confident and secure, along with the education to withstand the pressure to fit a societal model, they will have a better chance of surviving adolescence unscathed. Many of the girls and women I’ve worked with have confessed that their relationship with themselves began to take a nosedive before entering middle school. 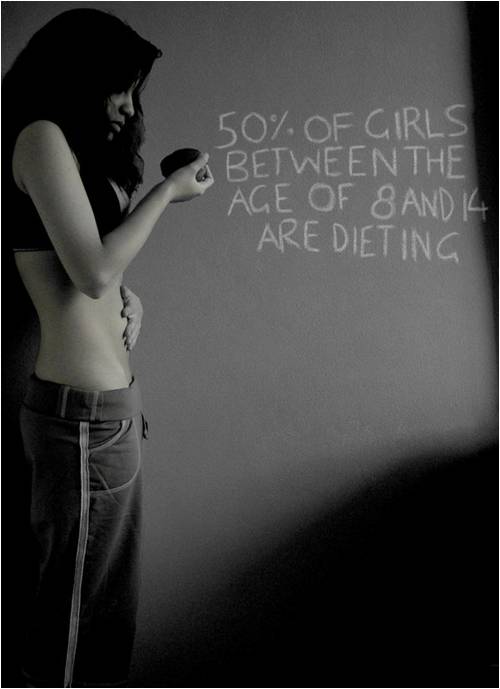 Bailey has been one of my most memorable clients to date. At 12 years old, she came into treatment weighing 62 pounds. I was shocked she was standing! Bailey’s genuine desire to understand how she had acquired this diagnoses of anorexia nervosa made her a pistol. She was sassy, clever, and became angry with her eating disorder for putting her in treatment, rather than finishing up her middle school years with her friends.

In a group session, Bailey shared with other adolescent girls that her negative body image and self-esteem decline began earlier than her issues with food. She said she remembered feeling insecure about her body after watching one of her favorite shows on the Disney Channel. “I wanted to look like her. I thought she was perfect.”

Bailey was 7 when she first experienced dissatisfaction with her body and low self-esteem. The rest of the adolescents chimed in, talking about images and actresses they were exposed to at such young ages; all of which would appear normal programming to most parents. The girls admitted that these images still plagued them.

Research agrees. This is not an unusual phenomenon. Rather, it's quite common that early experiences with media do contribute to low self-esteem. According to The National Association for Anorexia and Associated Disorders (ANAD):

What are we to do?

How to Help Girls with Body Image and Self-Esteem

Ask questions. Many parents make the mistake of giving their opinions before hearing the child’s thoughts. Ask her what she thinks about that magazine cover or television show. After she has explained how she feels, you may chime in, but remember, don’t tell her how she should feel about it or be overly critical. This will put up a wall for future communication.

Debrief. Ask your daughter to show you her favorite shows or YouTube videos. Watch them together and ask her questions.

Research with her. Getting online and showing your daughter how Photoshop and advertising or media tactics work may be effective, but having her do it with you allows her to make stronger decisions on what to think regarding media images.

It is impossible to supervise your daughter at all times, she can be at the grocery store looking at magazines, a friend’s house watching a show, anywhere on an iPad, exposure to media is everywhere. Educating your daughter about media, and the detrimental effects it can have on self-esteem is imperative when raising an emotionally healthy girl in today’s world.

Self-Esteem in Girls: Helping Her Thrive
Maintaining Confidence and Control Amongst Chaos
Nancy Harlow
August, 30 2017 at 1:49 am

I work with teens to help teach them leadership and personal growth, and I have noticed that most kids intuitively know what is right and what they SHOULD do, but they all seem to be waiting for the adults to tell them to do it or give them permission.
I think a lot of kids doubt themselves, and they end up going with the flow. If they just had a type of mentor, most kids would create way better results! https://www.preparemykid.com

Hi There! Please see our crowdfunding campaign that helps girls build self esteem thru art.
https://www.indiegogo.com/projects/veena-ethical-girlswear-that-empowers-using-art#/story

Emily I also lead esteem groups for teen girls. A majority of girls believe their ugly. I show them U.G.L.Y. can also mean Unique Gifted Loveable You.
They also falsely believe that the actress's and female singers they like are "perfect." I give them some perspective by explaining the challenges these women faced and chose to overcome i.e., some of the same challenges every teen girl faces.

Michael thanks for sharing! I love the U.G.L.Y re-frame!! Some of the most effective work I do is showing what is "real" versus "what is manipulated, photoshopped, education is empowering. Thanks for helping our girls!!