Journalism's Dirty Mental Illness Secret and Why It Matters

While working on an article for a different web site, I stumbled across a study about mental illness among journalists. According to the study, the rate of posttraumatic stress disorder (PTSD) is higher among journalists than the general population. While journalists tend to have "positive personal attitudes" toward mental illness, they are often afraid to reveal their mental health struggles.

Why Journalists Are Afraid to Disclose Mental Illnesses

I am a journalist with mental health diagnoses, including borderline personality disorder (BPD). I revealed my condition in an article about fraudulent enlistment in the military back in 2003. The article was controversial, but one woman wrote it took "guts and then some" to go public about my illness. For journalists, credibility is everything. And coming forth with a mental illness risks damaging credibility.

My diagnosis has cost me jobs before. My first job out of college, which I called "the dream job," ended after I had a dissociative episode while on my way to cover a town meeting. My Army career ended with my diagnosis. And one of my freelance gigs ended when I was placed in the state hospital.

I approached my editor at a job about an article on the state hospital. He told me I could come across as an "unreliable narrator." The stigma attached to mental illness is the main reason journalists are afraid to admit they are mental health consumers.

Why Mental Illness in Journalists Matter 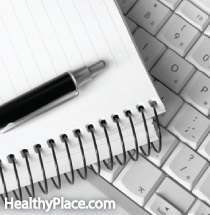 The stigma around mental illness is so strong that a Mental Health America survey ranked it the number one barrier to treatment, according to a PRNewswire article. According to former United States Surgeon General, Dr. David Satcher, nearly two-thirds of all people with diagnosable mental disorders do not seek treatment, in large part due to this stigma. Satcher said, "Film and television shows depicting mental illness can help the public learn it is treatable and that suicide is preventable . . . they have a greater ability to disseminate information and attitudes than we (health workers) do alone."

So journalists are very influential in how the public perceives mental illness. If we are open and honest about our struggles, other people will see that and take note. Journalists have the power to smash stigma.

Unfortunately, we often don't. The worst example I've seen comes from the New York Daily News, which ran an editorial called "Get the Violent Crazies Off Our Streets." When it was learned that the crime prompting the editorial did not have mental illness as a factor, the paper defended the editorial. According to NYCVoices, Stanley Crouch says:

Whatever [the attacker's] mental condition might be, those loons on the loose who pose threats to the citizenry are still out there . . . No, I am not calling for some hysterical rounding up of the mentally disturbed, a percentage of whom surely are harmless. What I am saying is that while we are reconsidering bad policies regarding the mad, we should not drop the ball just because he who might have nearly killed Nicole Barrett doesn't fit that bill.

How to Respond to Stigmatizing Material in the Media

What can be done to reduce this stigma? According to NAMI Indiana, Dr. Otto Wahl of George Mason University has the following ten suggestions:

As the saying goes, together we can make a difference.

APA Reference
Oberg, B. (2014, November 11). Journalism's Dirty Mental Illness Secret and Why It Matters, HealthyPlace. Retrieved on 2022, June 26 from https://www.healthyplace.com/blogs/borderline/2014/11/journalisms-dirty-little-secret-and-why-it-matters

Reflections on the Church and Severe Mental Illness Stigma
Closure of Mental Health Court Makes Everyone A Loser
Jade
November, 12 2014 at 2:59 am

Thank you for writing this. As a journlist with depression, it's refreshing to see someone else's candor. I love your point about "people first" language. It was something we went over in J school, but sometimes in a crunch or trying to fit a headline, those terms such as "schizophrenic" seem to pop in more easily. So thank you for the reminder.