When a Person with Mental Illness Witnesses a Crime

I live in a bad neighborhood, complete with an abandoned house next door. About a week ago, I saw a man with a crowbar and a bag enter the house through the previously boarded-up window. I called 911 to report a breaking and entering (B and E), and the police came out to investigate.

Or so I thought.

I walked outside, identified myself as the caller and prepared to positively identify the suspect. However, the police just looked at the forced-open window and left without saying a word. They didn't even interview me. I later learned that it's not the first time this guy has had the cops called on him--my landlord has called the police, but nothing has been done.

The whole experience has caused my symptoms of borderline personality disorder (BPD) to flare up. It has made me think about what a person with mental illness can do when they witness, or, God forbid, are victims of, a crime.

Being ignored by the police was upsetting. It made me feel invalidated. It reminded me of when I was sexually assaulted and the rapist got off on a technicality. I also have internalized some of this invalidation. I feel like the B and E shouldn't bother me because I wasn't hurt and it wasn't my property. 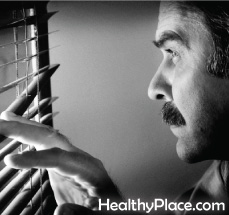 Validate your experience, but tell yourself the truth. Don't make assumptions. For example, I thought the police didn't take it seriously because I am a psychiatric patient (everyone in my apartment complex is). I don't know that for sure--it's an assumption based on internalized stigma. I also thought the police ignored it because they didn't care--again, I don't know that for sure. I have to be honest with myself and discard the assumptions it's so tempting to make.

Know the Stages of Recovery

There are stages of recovery similar to grieving. They are, according to literature from the Marion County Prosecutor's Office:

Thoughts of retribution are normal, but seek help if you start planning revenge. It's not worth sinking to their level.

The Psalms are a great source of prayers for victims of injustice. However, the best answer I ever received on, "Why is there evil in this world?" is from a Hindu.

If everything here were good and perfect, no one would leave this earth of his own accord; no one would want to go back to God. So in a sense misery is your best friend, because it starts you seeking God. When you begin to see clearly the imperfection of the world, you will begin to seek the perfection of God. The truth is that God is using evil, not to destroy us, but to make us disillusioned with His toys, with the playthings of this world, so that we might seek Him.

This is why the Lord Himself permits injustice and evil. But I have said to Him, "Lord, You have never suffered. You have always been perfect. How do You know what suffering is? Yet You have put us through these tests; and You had no business doing it. We didn't ask to be born as mortals and to suffer." (He doesn't mind that I argue with Him. He is very patient.) The Lord answers, "You don't have to go on suffering; I have given everyone the free will to choose good instead of evil, and thus come back to me.

So evil is the test of God to see if we will choose Him or His gifts. ~ Paramahansa Yogananda, Why God Permits Evil and How to Rise Above It

As a Mennonite, I believe that God did suffer on the cross. However, there is still a great deal of wisdom in Yogananda's words. If life were fair and good, what would be the point of faith? Who would want to leave this world? How would we choose to truly follow God? I also have the added comfort that all will be made right in the end.

I realize that I must validate my experience, be aware of the stages of my recovery, and seek God for help. And you can do the same.

APA Reference
Oberg, B. (2014, August 26). When a Person with Mental Illness Witnesses a Crime, HealthyPlace. Retrieved on 2022, August 10 from https://www.healthyplace.com/blogs/borderline/2014/08/when-a-person-with-mental-illness-witnesses-a-crime

What To Do When Mental Illness Help Fails
Crapshot: Gambling Addiction and Borderline Personality Disorder
Branden
August, 29 2014 at 6:57 pm

OMG I'm so sorry to here about this! I wish police would at least take the chance to at least look into it. Also I'm sorry to hear that you were raped. My girlfriend has been raped multiple times in her life. One of which got her pregnant. She kept the him and he is now 5 years old. Again sorry to hear about all this and I hope it gets better.

I got saved,born again and found all I could do is pray for these people and help as many as I can by speaking out about my life and illness and what's I've/ seen,forgive and let God is key

Nothing was done to theses nurses and hospital staffers,I felt angery for years and wanted money at least for my troubles which was too late for court when I was emotional ready

I was at Grey Stone Park State mental institute and witnessed crimes against humanity so many times,They even attempted to murder me with several overdoses to keep me from publicly toting them and lab results showed cyanid & arsenic