Reflections on Suicide in the Wake of Robin Williams' Death

It's news that leaves you morose--Robin Williams, the comedian and actor who brought us Mrs. Doubtfire and Patch Adams, is dead from an apparent suicide. The news made me reflect on my battle with borderline personality disorder (BPD) and my own thoughts of suicide. There are three lessons to learn - know when to ask for help, keep on seeking help, and always remember that suicide is often a permanent solution to a temporary problem.

Know When to Ask for Help

Recently I became severely depressed--to the point where I was reading a pro-suicide website that went into explicit detail on how to kill yourself. Since this is not my normal behavior, I called my therapist. This is what every suicidal person should do--tell a qualified mental health professional. Tell someone who knows how to help. If you don't have a therapist, call a crisis hotline or go to a crisis chat room. Help is relatively easy to find. 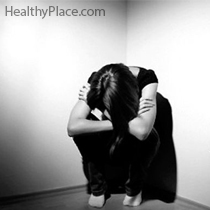 Don't worry if they tell you to go to a hospital. You have a legitimate, physical problem that is manifesting in your emotions. You wouldn't neglect a broken leg, nor should you neglect a broken mind. (Read my piece about the myths about psychiatric hospitals.)

My therapist sent me to the Crisis Intervention Unit for an emergency evaluation. While there are some bad crisis counselors, most of them genuinely want to help. The crisis counselor I spoke to told me I'd done the right thing by coming in, said I didn't have to fight my battle alone, and encouraged me to follow up with my therapist on an outpatient basis.

You don't have to fight your mental illness alone. Know when to ask for help, then reach out and get it.

I spent the worst four months of my life on the dual diagnosis unit at Richmond State Hospital in Richmond, Indiana. Long story short, I became suicidal, and the staff didn't believe me because of my diagnosis of borderline personality disorder. I told my mother I wanted to die, and she told me to tell staff and keep telling them until they did something because otherwise they might chalk it up to me complaining.

They ignored me until I made a suicide attempt, despite the fact I showed my suicide note to my therapist, the fact that other patients and my family knew I was suicidal, and the fact that I'd told several staff members I was going to kill myself. After the attempt, I was immediately evaluated and treated. I later confronted the psychiatrist, who said "We had another borderline here, and every other word out of her mouth was 'suicide', so we thought you were the same way." I made hospital staff promise to take me seriously in the future.

When I was a kid, I saw a Winnie the Pooh musical about sexual abuse (yes, so wrong on so many levels). One song contained the lyric, "If they don't believe you, keep telling them 'til they do." Advice worth following when your life is at stake.

Suicide is a Permanent Solution to a Temporary Problem

Let me be honest - I hate that cliche. But it's true. Suicide is permanent. You can't undo it. You can't even feel relief because the dead don't feel a thing. Life, on the other hand, can change in a moment. I know what it's like to think there's no hope. I know what it's like to think death is preferable to life. But what you've got to know is that lots of people get better. You've got to keep trying and never give up.

One of the best pieces of advice I got regarding suicide is: wait 24 hours. This is plenty of time in which to polish your goodbye note, make your peace with God and others, and reach out for help one last time. Also, more often than not, once you make your preparations you'll snap out of it. And what's one day? Time enough for things to improve.

You're worth a 24-hour reprieve, and you're entitled to the rest of your life.

More Articles on the Death of Robin Williams

APA Reference
Oberg, B. (2014, August 12). Reflections on Suicide in the Wake of Robin Williams' Death, HealthyPlace. Retrieved on 2020, November 24 from https://www.healthyplace.com/blogs/borderline/2014/08/reflections-on-suicide-in-the-wake-of-robin-williams-death

First, "suicide is a permanent solution to a temporary problem" really is not a helpful thing to say: http://megan.thewildhoods.com/permanent-solution-temporary-problem/
Second, Robin Williams DID seek help. We need to be asking about why it failed to work, and to stop worshipping this idealized "get help"/"reach out" thing we're doing. Depression is treatable, but it takes competence on the part of the doctor, not just determination on the part of the patient. http://www.washingtonpost.com/express/wp/2014/08/15/robin-williams-the-help-failed-not-hi…

You lost when you used the statement you hate. No one knows if it is a temporary situation. That and suicide is selfish are at the top of the worst things to say to someone.
Robin Williams was a genius. I have followed his career all these years and if you go back to listen, Mrs Doubtfire was with him in Viatnam. When I heard was I surprised, no. I had heard him talk about his childhood, addiction, etc. I could hear the struggling demons even while he made me laugh, stop to think about life and the mix of other emotions. He did what he had to do that day. It was his right to decide. It may not be the choice others would have picked but they did not walk his path. Robin I miss you but I hope you have some freedom from the pain. I keep your amazing works close. Sleep well

Many years ago when living in Vancouver A friend
and myself were out at a Japanese restaurant on Denman. It was a very rainy night and I looked
up and saw this face looking through the window.
Suddenly I recognized Robin Williams and had this
urge to run and ask him to join us. My family members suffer form mental health issues with at
least 3 suicides. As devastating as it is...maybe
it was their way of finding peace.

I was devastated when I learned of Robin Williams' death. In reflection, he had family and friends who loved him as well as millions of fans. He had the money to to seek help for his depression and addictions and still, he took his own life, having no hope. I have lived with depression since childhood, do not have family or freinds. Have very limited income and am 70 years of age. I feel I am at the end of my life, have no desire to exist and wish I had whatever it takes to end life. Suicide attemps were made in my teens and 20s. Are we just too old to see any further use?

Guilt and shame are already a part of the manifestation of suicidal thoughts. We do not see ourselves as good for our loved ones. Making sense and acting responsible are out the door. That is why it wins and that is why it is important to have support and love. It is like your brain loses its survival instinct.

If suicide crosses your mind, just think of the lasting damage your death would cause friends and family or emergency workers/ members of the public. There is always hope and life is precious and God-given.