What Happens When Your Dream Seems to Die?

In September of 2008, More Than Borderline's, Becky Oberg, was in a state-run psychiatric hospital. As she reflected on her life, she wondered if her journalism career was over. After all, she'd failed to find a job and had been fired from her dream job for having a dissociative episode while on the clock. It did indeed seem her career was over due to the stigma against mental illnesses such as borderline personality disorder (BPD). 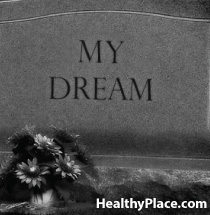 Her Dream Only Seemed to Die

But she was wrong. Her speculating that her career was over was just the illness lying to her. After her discharge, she landed not one but two journalism-related jobs. And more importantly, she was happy--even if things didn't turn out the way she'd planned.

Becky shares her story as to what happened after she thought her dream had died because of BPD.

What Happens When Dreams Seem to Die?

APA Reference
Oberg, B. (2014, June 30). What Happens When Your Dream Seems to Die?, HealthyPlace. Retrieved on 2022, October 7 from https://www.healthyplace.com/blogs/borderline/2014/06/what-happens-when-your-dream-seems-to-die

Borderline and Serenity in the Midst of Chaos
What the Hobby Lobby Decision Means for People with Mental Illness
Debbie
August, 11 2014 at 2:13 pm

I am here in west central,illinois, wondering when i am getting thrown out of here for smoking and letting a boyfriend type come into my house on an almost permanenet basis to him, and I am extremelyworried about getting kicked out of my apartment, i been homeless all over texas before and it will cost me big money to get back to thee homeless shelter in Arlington, texas. help ask some pentecostal churches to pray over me or something. Im scared too. You can get so dirty and trying to clean up in public restrooms without getting thrown out. I dont want to go dumpster digging and i am afraid they will try and id-theft me I been id-thefted before in texas and i got my id back in illinois. I suppose hitchhiking might be in order and I have no money to hand them for a ride. I am handicapped with a semi-broken knee and walk slow and it hurts. my dream of going to college or journalism is fading me fast too. Debbie

It gives encouragement to those of us who have a mental health condition, to see inspiring words from other mental health patients who are able to be successful after episodes in the hospital, etc. Doesn't seem like fun when I see some others end up in the hospital due to their conditions interrupting their lives or careers; but the comments from this blog help me to want to keep moving forward despite what some others may say to me.