I Self-Injure--Here's What That Means

My diagnosis of borderline personality disorder (BPD) is somewhat controversial; one doctor said it might be more accurate to say I have "traits of borderline." Whatever the words, I have at least one symptom of BPD--I self-injure. That's easy to define, but hard to explain. Here's my story.

Myth: Self-injury is for attention.

One of the most damaging myths about self-injury is that it is an attempt to seek attention. If that's the case, why do so many self-injurers, myself among them, try to hide their injuries? Lady Diana Spencer summed it up best--you feel so much pain on the inside that you hurt yourself on the outside because you want help. I'll say it again--self-injury is not a plea for attention, and even if it were, imagine how much pain the person must be feeling to have to resort to primitive methods to get attention? 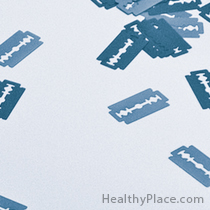 I live in a supervised apartment, with medications given three times a day. When I self-injure, my first thought after the euphoria is "Oh, ****!" I try to hide it because I don't want to go to the hospital and be a psychiatric patient. I'm simply trying to cope with pain in the "best" way I know how.

Every person who self-injures has his or her own reasons for doing so. Mine are closely tied with trauma. When I was 19 and home from college on Christmas break, my father and brother Dan got into an argument. My father beat Dan so bad that it left welts on his chest, and my brother Tim ran to me for help, crying, "Dad's gonna kill Dan!" I literally felt something in my brain snap that night and shortly afterwards picked up a knife and cut for the first time.

I blamed myself for not being able to stop it. I thought I was a coward for not jumping into the fight. I thought--and to some extent still think--that if I'm not afraid of physical pain, then I can override the mental pain of the situation and take action. Soon I was addicted to cutting and burning. It's been a struggle ever since.

Hope for those who self-injure

There is hope for people who frequently and chronically self-injure. I've come a long way with the help of medication and therapy. Some days I go without any self-injurious behavior. Other days I relapse and self-harm. I've discovered that I have to realize some days will be better than others and take things one day at a time.

While dialectic behavioral therapy (DBT) is a common treatment for BPD and helps many, some people don't respond to it. I'm one of them. If that's the case, schema therapy is useful. I now understand and recognize why my brain is telling me to cut, and more often than not can fight back. I no longer self-injure every day and I'm not in and out of hospitals all the time.

That doesn't mean I've recovered completely. I still relapse from time to time. But I'm no longer suicidal all the time. I have found a way to survive, and so can you. You just have to keep trying until you find something that works.

Some days I get through without even a thought of self-injury. Other days I relapse and self-injure. It's a daily struggle to stay sane and safe.

APA Reference
Oberg, B. (2014, March 3). I Self-Injure--Here's What That Means, HealthyPlace. Retrieved on 2022, July 4 from https://www.healthyplace.com/blogs/borderline/2014/03/i-self-injure-heres-what-that-means

How Buying Something Can Trigger Symptoms of BPD (Video)
People Can Change: My Reconciliation with My Family
Greg Mercer
March, 7 2014 at 2:34 pm

Good work on a tough topic, thanks. As a Psych Nurse with more experience than knowledge in this area, I've found, at least in brief inpatient stays, that ignoring the so often pejorative borderline idea helpful. I focus on the person, their distress & symptoms, what works for given person, what doesn't, no judgment. Frame cutting as a problem like so many others, a mixed bag, pros and cons. As I write, no judgment seems the heart of it. Folks get such prejudice from so many people, such disdain & distrust. These unhelpful reactions, often fully formed once the B word comes up well before we even meet the person. Expectations have such power, and every interaction is the result of both parties input, even if patient & staff. I wish, so often, that more treaters would open themselves to their own responsibility when it comes to patients' feelings & behavior. In any case, thank you again for your knowledge.

A long time ago I found a list on the internet 101 things to do instead of self injure ,it helped me .I think that was the title to it put that in your search box see what you find

Thankyou for such an honest and open description of the feelings behind this difficult to understand behaviour. It takes a lot of courage to speak up and out about mental health issues. I am trying to do this myself. Even this short message is a baby step towards helping myself and hopefully others on our respective journeys.