My Hopes for the Affordable Care Act

Whether you call it Obamacare or the Affordable Care Act, there's no denying that the legislation has sparked controversy. But it's a much-needed debate: are insurance companies a business or a service? If they're businesses, as is the current role, they function by denying as many sick people as possible. But if they're a service, as is suggested by the ACA, they need to man up and do the right thing by covering those who need it most. So here are my three hopes of the ACA's effect on insurance companies. 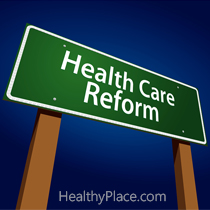 I'm in a unique situation. Although I'm a veteran, I'm not eligible for benefits because I wasn't in for two years. That left me without a healthcare provider until I went on Medicare and Medicaid, made possible by the Army's diagnosis of disability. Before I went on government aid, I tried to get insurance but as soon as the salesman learned the Army had diagnosed me with a mental illness, he told me I was ineligible for private insurance due to a pre-existing condition. That's basically a way for insurance companies to cut costs-by denying healthcare to those who need it most.

Makes sense from a capitalist perspective. But those who are for not covering pre-existing conditions forget a few things. They forget that the person in need of health care often goes on public aid. And in order to stay on public aid, the person often has to have a low income. For example, in my state of Indiana, I can't accumulate more than $1,500 in total assets or I'll lose my health insurance. This means I stay trapped in poverty and rely on government benefits to get by. It can be argued that the money saved by not insuring me is actually less than the money it would cost to insure me.

It is my sincere hope that the ACA's no more pre-existing conditions clause will enable me to get a job, get insurance to treat my mental health condition and therefore be able to keep said job, and slowly raise myself out of poverty.

Despite my personal feelings about former President George W. Bush (I'm still a little angry about Iraq since I almost got sent there), I will give him credit for the Mental Health Parity Act. It was, like the ACA, an attempt to force insurance companies to do the right thing. Basically, this law was designed to ensure that insurance companies covered mental illness like any other illness. For example, if they have a lifetime cap of $1 million for cancer, they can not cap mental health benefits at $100,000.

But there's always a loophole. In this case, there was no requirement that insurance companies offer mental health benefits. In addition, if meeting the MHPA would increase an employer's expenses by more than 1 percent, they were exempt. It also did not cover businesses with less than 50 employees. So it was an empty promise.

My hope is that the ACA will fill in the loopholes left by the MHPA by equalizing lifetime caps and mandating coverage for mental health care.

Disappointment in the insurance companies

In spite of my hopes, I consider myself a realist. There have been some disappointments with the ACA. However, I do not blame President Barack Obama--I blame the insurance companies.

It is my probably naïve hope that insurance companies will man up and do the right thing. What are your hopes and fears regarding the ACA?

APA Reference
Oberg, B. (2013, November 12). My Hopes for the Affordable Care Act, HealthyPlace. Retrieved on 2022, August 17 from https://www.healthyplace.com/blogs/borderline/2013/11/my-hopes-for-the-affordable-care-act

To Becky Orberg:
I, too, am from Indiana. My concern about your blog is that it seems more opinion than fact.
Good health care should be available to all, but the "Obama Care" approach has too many hidden agendas...such as the "pork" that was written into the bill. Instead of benefiting most people, it will exact fines against some and force others (such as young people) to buy it in order for it to pay for itself.
The law needs to be repealed and a new simplified law should take its place.
Socialized medicine is failing in Britain and in Canada too many people are not finding it to be satisfactory.
I respectfully disagree with you.
--Patty Bright